Hej Hej! Posted by Transparent Language on Jun 27, 2008 in Culture 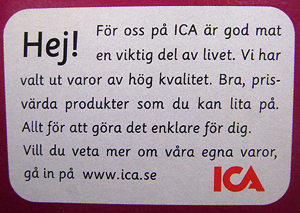 Everywhere you go in Sweden, people “hej” at you. If you don’t know that “hej” means “hello” in Swedish, you might be slightly confused as to why everybody is trying to get your attention. Because that’s what we use “hey” for in English, among many other things, right?

“Hej!” in Swedish doesn’t have any of the negative English “hey!” connotations. Instead, it’s a multi-purpose greeting used by practically everyone in the country. It sounds awfully familiar, doesn’t it? Like the kind of word you’d only say to those with whom you have a personal relationship. Yet in Sweden that word managed to cross from being just an interjection in casual speech to a national greeting.

And how did that happen?

The urban legend goes that in the late 1960s many foreign tourists complained that Swedes lacked proper etiquette when it came to greetings and social interactions. And because of that, the country was perceived as less than polite. The national Tourist Board overlords decided to quickly rectify this situation and instructed all hospitality workers to show off their good manners by greeting all and any customers. And a helpful linguistic genius came up with the idea of promoting the use of “hej”. It made perfect sense, “hej” is a simple word, sounds almost the same in any language and anybody can pronounce it correctly. In no time it became the standard greeting in the tourist industry. And from there, it migrated to other walks of life. That’s the story was told to me by an official from the Stockholm Tourist Office.

Is there any truth in this legend? A little. Among certain groups of people, “hej!” had been used as a greeting since the mid 1800s. Then around 1870s, when the students in Uppsala got the wind of it, the word became more and more popular. In the beginning of course, it was a greeting only used with people one was familiar with. You wouldn’t go all “hej!” on perfect strangers. For those occasions, Swedish had (and still has) more refined ways of saying “hello”.

Then came the radical 1970s. Sweden had just gone through a massive overhaul of its national language, the process known as “du-reformen”. Suddenly, it became OK to use the pronoun “du” (second person, singular) when talking to total strangers. Egalitarianism at its finest! “Hej!” quickly followed suit and became the greeting of choice for the masses.

Today, in addition to “hej!”, you may also hear these two variants:

Hej hej! = when said twice it implies friendliness and excitement to see you.
Hejsan! = this would be the “polite” version of “hej!” that you say when you want to be just a little bit more “official” and “proper.”