Christmas Season Traditions in Sweden Posted by Marcus Cederström on Dec 27, 2011 in Culture

We’re in those days between New Year’s Eve and Christmas when people kind of laze around, gliding through their work week just trying to get by waiting for one more holiday. So what better time to discuss a few of the different holidays in Sweden around this time?

First, Swedes love vacation days. As they should. Most companies will start you off with at least 25 days of vacation per year. And that doesn’t even count all of the public holidays. December and January are chalk full of them.

In December, there is of course julafton (Christmas Eve), the big Christmas celebration in Sweden. This is the day you’ll be watching Kalle Anka on TV with nearly the entire nation. Unfortunately, it doesn’t count as a red day, those sought after days off from work, but that doesn’t stop most people from taking the day off and many companies giving the entire day off.

Then there’s juldagen (Christmas Day). This is absolutely an official day off from work. This is the day you’ll be recovering from watching Kalle Anka on TV with nearly the entire nation.

Following juldagen comes annandag jul (Boxing Day). Just as the Swedish suggests, this is the day after Christmas. Historically there are religious reasons behind the holiday. Today, it’s just one more day off of work.

Then there is a lull. But have no fear; there are plenty of days off coming up. You just need to wait a week or so for January to roll around.

New Year’s Eve is not an official day off from work, but is like Christmas Eve in that most people will be given the day off anyway. And the traditions vary a bit from American traditions. There is no ball dropping. There is no Dick Clark. There is no countdown. In fact, trying to start a countdown with a bunch of Swedes will get you a lot of strange stares. Just trust me. But instead of a countdown, the Swedes celebrate with fireworks. Try to find yourself a rooftop to look out over whatever city you may be in. It’ll be worth it. Trust me.

New Year’s Day does count as a day off from work. And just like Americans, it’s a day usually used for recovery. Lots and lots of recovery.

Now for a lot of people, that’s it. Holidays are over. Back to work. Nose to the grindstone, no more fun for a while. Not Sweden. There is still one more day off: trettondedag jul. The Epiphany. Again, there are obvious religious reasons for the holiday, but for most Swedes today it is just another day off from work.

Finally comes the 13th of January. This is according to tradition the official end to the Christmas season. That means that you need to get rid of your Christmas decorations. Namely your Christmas tree (which Jennie does a great job of explaining in her post about The Swedish Christmas tree). Back in the day it was common to just toss the tree out of your window, even if you were in a tall apartment building. That’s less popular today and instead collection sites are usually available throughout your city. However, some people still toss Christmas, and the Christmas tree, out the window to mark the end of the season. Like me. From the 14th floor. No one was injured and I enjoyed every second of it. Until I had to clean up the mess that followed. I was picking up pine needles for months. 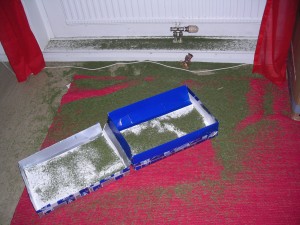