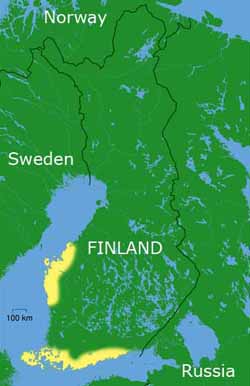 I’m sorry this post is a bit late. But I have a good excuse. I’ve been away. I went to Finland! Oh yes, I can just feel your excitement in the air like static electricity.

But wait a second now! There is a reason why I am writing about Finland here. You see, they also speak Swedish over there. In fact, it’s one of the country’s official languages, the other being Finnish, naturally. Finnish itself is a totally incomprehensible oddity and to me sounds like Klingon spoken backwards. Or, as my friend who lives in Finland says, “I’ll let you in on a little secret, it IS Klingon spoken backwards.”

Fortunately, quite a few people across the Bay of Bothnia do speak something more understandable as their mother tongue. Swedish! There are even several municipalities in Finland that are totally mono-lingual, where the inhabitants speak Swedish and nothing else. The most famous one is Hammarland on the Åland archipelago, and the other is just down a spit across the bay from me – Korsnäs. Korsnäs has the distinction of being the most Swedish municipality in the world, percentage-wise it has more Swedish speakers (around 98%) than any municipality in Sweden. If that’s not impressive then I don’t know what is.

Finland Swedish (finlandssvenska) is one of the many Swedish dialects, just like skånska. But much easier to understand than skånska, if I may be allowed to say so.

As with any dialect, there are differences between “proper” Swedish and the variant of the language spoken in Finland. There are some words that may be used in a different context that mean something else, or there are words that don’t exist in the “mainland” Swedish at all. Or archaic words, but which changed their meaning, are still used. Sometimes the sentence order can be a bit strange as well. Technically correct, but somehow unfamiliar to “proper” Swedes. And then there’s the lack of melody and intonation. Swedish is the only Indo-European language that still retains its tonal characteristics. But not Finland Swedish. The tones are largely gone. (And Swedes always claim that of the two it’s the Finnish Swedish that’s more archaic and backwards. Ha!) For that reason many, if not most, rikssvenska (standard Swedish) speakers wrongly assume that finlandssvenska is just normal Swedish spoken with a Finnish accent.

What is quite impressive is that a country with such a tiny population as Finland, where an even tinier minority speaks Swedish, produced so many famous Swedish-speaking individuals. Have you heard of Tove Jansson? Of course you have! The Moomins! She wrote those stories. And the composer Jean Sibelius? Swedish-speaking, too. And the violinist Linda Brava and her band The Violators? Yep, another Swedish-speaking Finn. And Fredrik Idestam, the founder of Nokia? And Linus Torvalds, the creator of Linux? And Karl Fazer, the guy who started the Fazer chocolate company? I’m not going to list more (and there is more, believe me,) because Finnish-speaking Finns will develop an inferiority complex and stand in the corner and pout.

This is just a short introduction to Finland Swedish (finlandssvenska) and Swedish speaking Finns for you. And I think you can clearly see that the topic just warms my heart!