In my last post, as I’m sure you’ve noticed, I showed you a Swedish noun with a “real” gender. A noun that has both a male and a female version. That word was “skådespelare” which means an “actor”.

This is actually a bit similar to what happens in English as well. We have an actor and an actress. A waiter and a waitress. A priest and a priestess. An emperor and an empress.

While this not exactly what happens in Swedish, the concept is indeed somewhat similar. The difference is that there are many more words in Swedish that have both a feminine and a masculine version than in English.

You’ve seen that already happen with words describing nationalities, or at least regional origins of people.
Remember “skånska” – a lady from Skåne? And “samiska” – a female Sami?

When it comes to nouns defining professions or occupations, that’s where Swedish turns into a real bonanza of gender-specific forms. And sadly, a lot of those nouns have just one genderless form in English, which can be used for both men and women.

Then there are some that have masculine and feminine forms just like in English:

and the one you already know:

There are of course many others, this is just to give you a general idea.

Fortunately, in most cases you can use just the masculine form regardless of whether you mean a man or a woman. This trend is also visible in English. I know a few actresses in New York City who refuse to be called “actresses”. Instead, they refer to themselves as “female actors”. Fine by me. I support gender equality and all that. 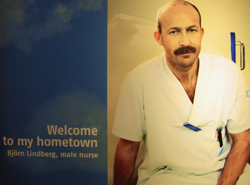 One strange exception is the word “nurse” in Swedish. Well, the word in itself is not strange. It’s “sjuksköterska” and it comes from “sjuk” meaning “sick”, and “skötare” meaning “keeper”, or “somebody who takes care of somebody/something else”.
And here is where it gets funky. “Skötare” is a masculine form, and “sköterska” is its feminine equivalent.

Technically, if someone is a male nurse, you can refer to him as “sjukskötare”, but personally, I’ve never seen this word being used outside of a dictionary. Instead, even a male nurse is still just a nurse – “sjuksköterska”. If you want to be exact, you can specify – “manlig sjuksköterska”, which means exactly a “male nurse”.

(Now if you want to have some real fun with this word, ask a person from Skåne to pronounce it. Ha!)

The photo of Mr. Björn Lindberg, who’s a male nurse, is part of the “Stockholm – The Capital of Scandinavia” ad campaign and you can see it at Arlanda airport.