Crispy and crunchy on the outside, soft in the middle, the waffle is a triumph. It’s no wonder that Scandinavians pay homage to this breakfast-meets-lunch delicacy with its own holiday, Våffeldagen! For today’s blog, we’ll learn the linguistically mixed-up origins of Våffeldagen OCH grab some waffle-inspo from the Nordic Food Geek herself, Patrice Johnson. She has contributed three recipes that will be perfect for your next waffle moment, savory and sweet fans alike!

Long before Swedes, Norwegians, and Danes celebrated the waffle on March 25th, another event dominated this day. March 25th is the Catholic recognition of the Feast of the Annunciation, a.k.a. the day when Angel Gabriel told Mary she should be expecting a babe in nine months’ time. Så, what on earth does this have to do with waffles? Not much thematically, but let’s look at the name:

“Annunciation Day,” also called “Our Lady’s Day” is Vårfrudagen in Swedish. Over time, when varied intonation and dialects combined, Vårfrudagen jumbled into vårfurdagen, which sounded like våffeldagen. Hoppsan! Våffeldagen was “conceived” 😉  via a language goof-up. 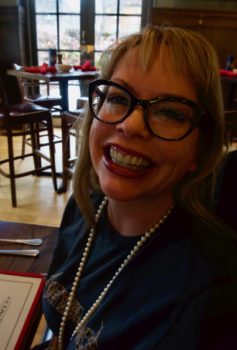 “Jag! Me!” shouts Patrice Johnson, a life-long waffle-lover, cookbook author, food columnist, cooking instructor, and Swedish-speaker. While Patrice identifies as a Nordic food geek, she expertly explores the ways in which modern immigrant experiences shape a culture’s food traditions and food systems. Patrice is especially passionate about showcasing local farmers and food producers, highlighting the diversity and seasonality of the ingredients around her. A real recipe innovator, this one!

When I asked Patrice why she is such a fan of our feature treat, she shared a childhood memory of an infamous waffle night when her sister invited a friend for dinner. Patrice recalls the way her mother was projecting her laid-back style, placing her well-seasoned waffle iron directly in the center of the dinner table in front of the sisters and their guest. In classic 1970s fashion, a protective layer of glass sat atop the wooden dining room table. As the diners sat to enjoy their steaming dinner waffles, the waffle iron overheated, and the glass shattered! This perfectly embarrassing waffle blunder earned a spot in Patrice’s childhood food memory and is a perfect connection to the origin of Våffeldagen, too!

The traditional Scandinavian waffle is served in a sweet preparation, with a basic batter of flour, cold water, and a pinch of salt. Modern spins give us savory versions with potato and even cheese in the batter, mums! Patrice has shared two sweet preparations with us; her Yoghurt-Ricotta Waffles and Chocolate Waffles are best served with your favorite fruit topping and a dollop of whipped cream. More of a savory fan? Patrice, också! Here is a recipe for chicken and waffles she affectionately named “Almost Aunt Millie’s Waffles,” be sure to read the story that goes along with it, too!

*OBS – Patrice pro tip! This Nordic food geek finds that butter is the best mode of grease before adding batter to the waffle iron. Take it from a gal who owns three different types of waffle irons 😎

Want more Patrice? You can follow her food adventures on Instagram as @nordicfoodgeek and read her weekly blog, Called to the Table. For more of her explorations into food traditions of the American Midwest and a celebration of immigration recipes old and new, check out her cookbooks on the Minnesota Historical Society’s website. Jul: Swedish American Holiday Traditions and Land of 10,000 Plates: Stories and Recipes from Minnesota.