Wat Pho – Temple of the Reclining Buddha Posted by sasha on Jan 12, 2017 in Culture, History, Travel

One of the most famous and impressive temples in Bangkok is Wat Pho (วัดโพธิ์ wát poh). Also known as the Temple of the Reclining Buddha for the 46-meter long Buddha image it houses, it’s a must-see attraction when visiting the Thai capital. 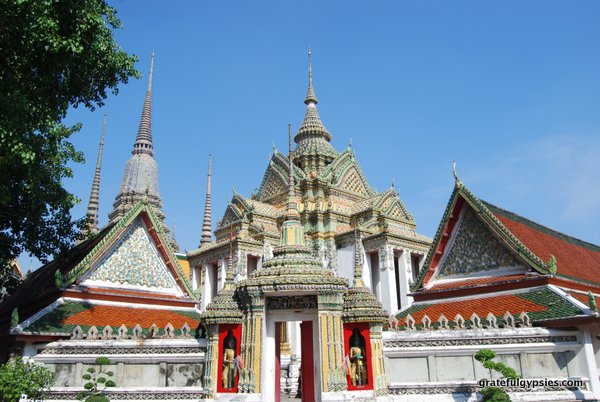 Wat Pho is one of the oldest temples in Bangkok. As a matter of fact, it has been around since before the city was even declared the capital. The name comes from the monastery of the Bodhi tree in India where it is said the Buddha attained enlightenment. It’s uncertain when exactly the temple was built. King Rama I ordered that a new temple be constructed at the site in 1788, shortly after he moved the capital to Bangkok from across the river in Thonburi. The project took several years to complete, and it eventually became the main temple for the first monarch of the Chakri Dynasty. As a matter of fact, some of his ashes are enshrined here. 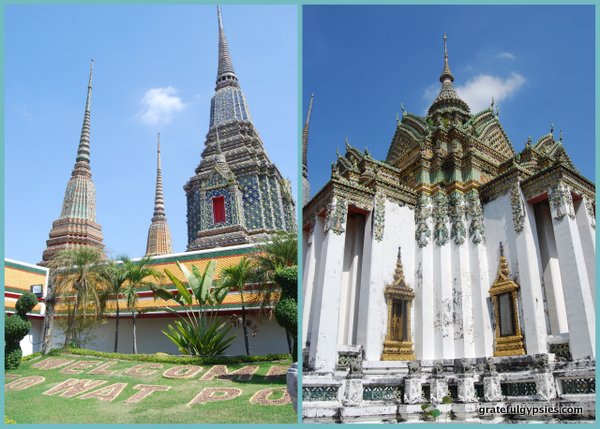 One of Bangkok’s oldest temples. 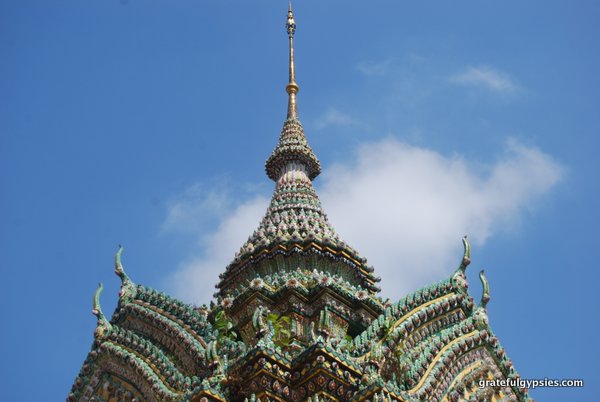 Significant renovations and expansion occurred during the reign of King Rama III. This took over 16 years to complete, and most of the structures you see today were either built or rebuilt during this period. He also turned the complex into a major center of learning. It’s regarded as Thailand’s first university, and it still houses a school teaching traditional Thai massage. If you’ve never tried a Thai massage, this is the place to do it. 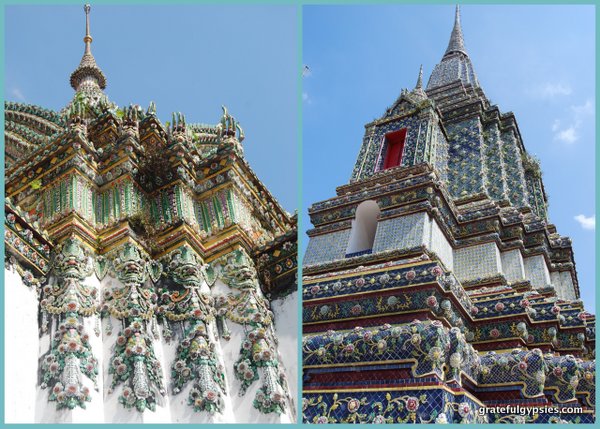 Some of the many chedis.

This is one of the largest temples in the city, covering an area of around 20 acres. The complex is divided into two walled compounds. The northern side – known as the phutthawat (พุทธาวาส pút-taa-wâat) – is open to visitors and contains the reclining Buddha. The southern side – called the sankhawat (สังฆาวาส săng-kaa-wâat) – is the residential quarters for the monks and a school. 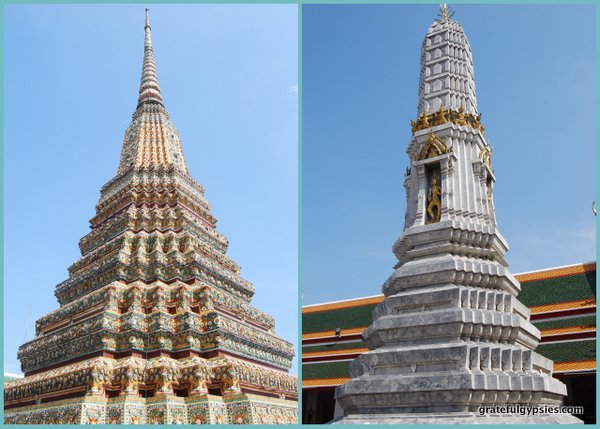 The temple contains an impressive 91 smaller chedis (เจดีย์ jay-dee), along with four grand ones honoring the first three Chakri monarchs (there are two for Rama III). Be sure to take your time to explore the complex – it’s incredibly beautiful and full of exquisite Buddha images. 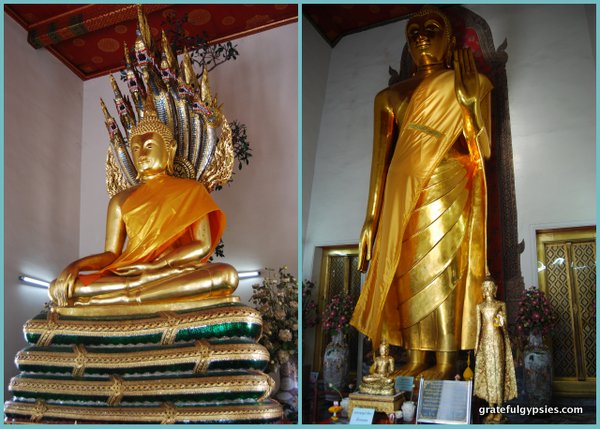 So many Buddha images.

In fact, Wat Pho contains the most Buddha images of any temple in Thailand with over 1,000 in total. Most of these were brought here from the former kingdoms of Sukhothai and Ayutthaya. 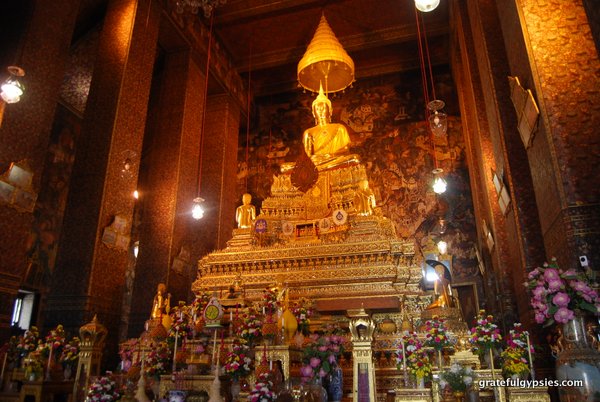 In Buddhism, 108 is a very significant number. There are 108 bronze bowls that circle the temple that you can drop coins in for good luck. There are also quite a few impressive murals throughout the complex. You might need a guide or a book to decipher them, but you can always just admire their beauty on your own. 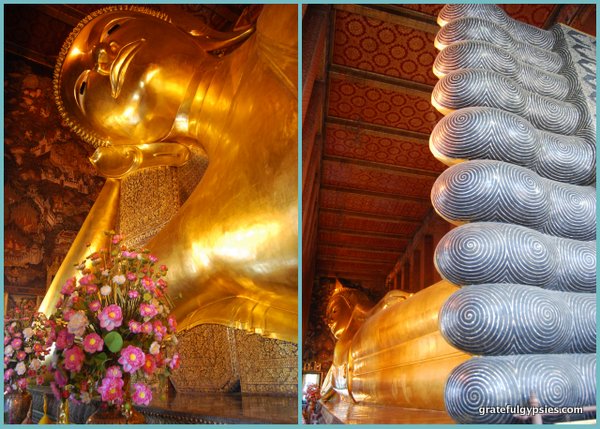 Of course, the highlight of the temple is the Reclining Buddha (พระพุทธไสยาสน์ prá-pút săi-yâat). Standing at 15 meters tall and stretching 46 meters in length, it barely fits in the building. 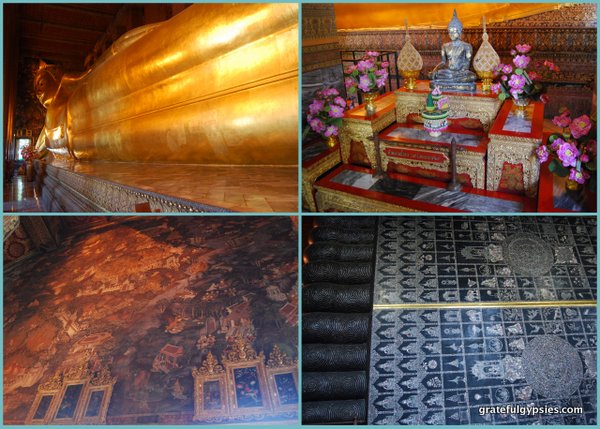 A closer look at one the murals and Buddha’s feet.

The Buddha’s feet are 3 x 4.5 meters and are decorated in shiny mother-of-pearl. They also display the 108 auspicious characteristics of Buddha. 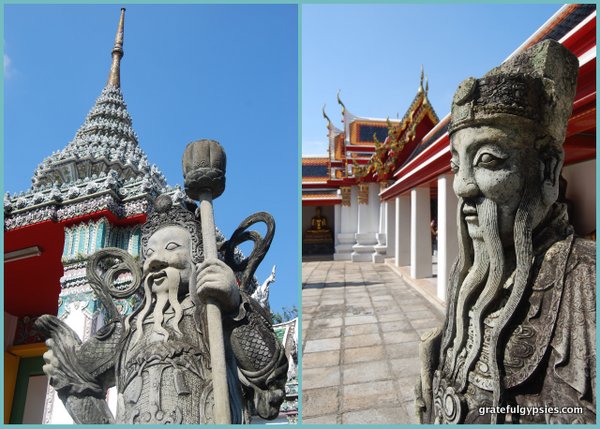 Chinese statues can be found around the complex.

If you plan to visit Wat Pho, make sure you dedicate at least an hour to this incredible ancient temple. There’s much more to the grounds than just the Reclining Buddha, so be sure to take in as much as you can. Of course, there are plenty of other temples to see in Bangkok, such as the famous Wat Phra Kaew – Temple of the Emerald Buddha. You can easily see both in one day as they are located only a short distance apart.