Temple of the Emerald Buddha Posted by sasha on Sep 7, 2016 in Culture, History, Travel

There are thousands upon thousands of temples across Thailand, but none is more sacred than Wat Phra Kaew (วัดพระแก้ว wát prá gâew). Located within the confines of the Grand Palace in Bangkok, it’s also known as the Temple of the Emerald Buddha for the important, holy relic that is housed here. A visit to this vast, glittering temple should be high atop anyone’s list when traveling to the Thai capital. 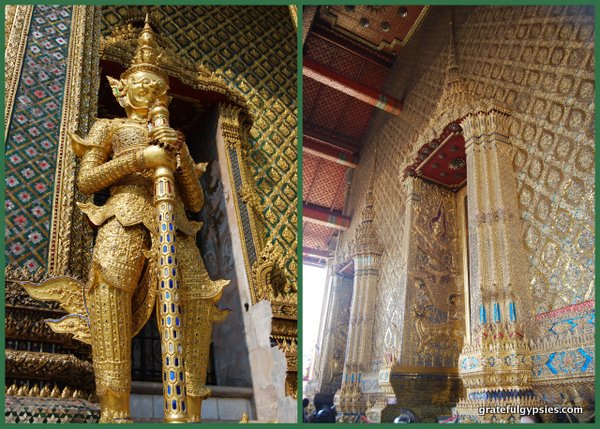 The Buddha is in there, but pictures are not allowed.

To understand the importance of the temple, you need to know the legend of the Emerald Buddha (พระแก้วมรกต prá gâew mor-rá-gòt). Despite the name, this Buddha figurine is actually made of jade – the “emerald” simply refers to the green color. The Buddha is seated in a meditative posture, and is clothed in gold. Legend has it that the Buddha image was discovered in Chiang Rai after lightning struck a chedi in a temple there in 1434 AD. When it was found, it was covered in plaster. The abbot of the temple soon discovered that the plaster was peeling, revealing the beautiful jade that it was actually made of. Over the next several centuries, the Emerald Buddha would have quite the journey. 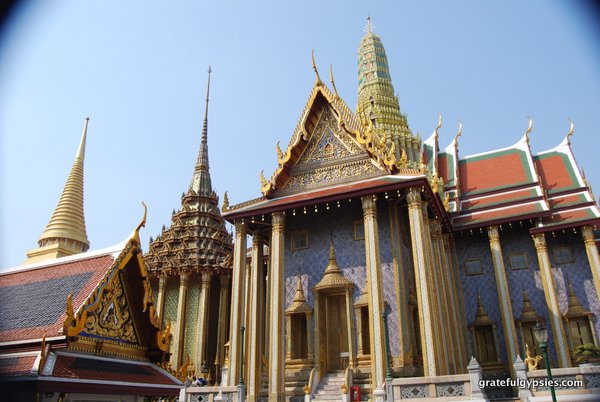 A look at the temple.

The king who ruled northern Thailand at the time wanted the image in his capital of Chiang Mai and sought to have it moved there on an elephant. On three separate occasions, the elephant insisted on taking the Buddha to Lampang instead. Taking this as a divine sign, the king insisted that it remain there. It would eventually find its way to Chiang Mai, before a shake up in the royal lineage resulted in it being moved to Laos. It stayed in Vientiane for 214 years, until General Chakri took Vientiane and returned the Buddha to Siam. 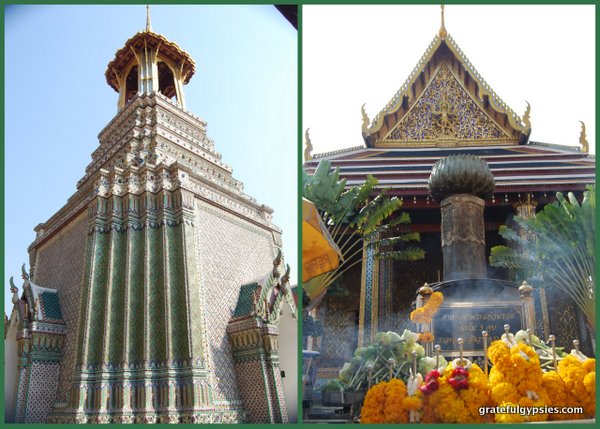 The current home of the Emerald Buddha.

It was housed in a shrine near Wat Arun in Thonburi, the new capital. The general soon became king and adopted the title Rama I. He also moved the capital across the river to Bangkok, where he had the Grand Palace and Wat Pra Kaew built. The sacred Emerald Buddha was moved there in a grand ceremony on March 22, 1784. It has served as the palladium of Thailand ever since. Only the king is allowed to touch the Emerald Buddha, and he does so three times a year in an important ceremony where he changes the cloak around the statue – one for each season. This ritual is meant to bring good fortune to the country and its people. 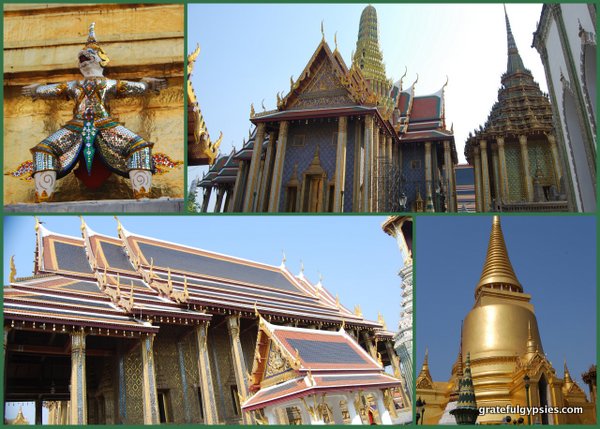 When Rama I decided to move the capital over to Bangkok, he chose a site for the new palace between two old temples – Wat Pho and Wat Mahathat. A brand new temple was built inside of the palace grounds specifically to house the sacred Emerald Buddha, and Wat Phra Kaew was completed in 1784. 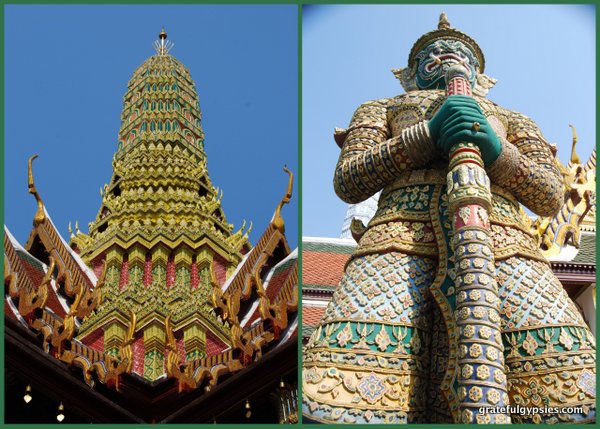 Look at that detail!

At 94.5 hectares (234 acres), it’s a massive complex with over 100 buildings. The Emerald Buddha is housed in the bot (โบสถ์ bòht) – the holiest room in the temple. The entire complex is very elegantly decorated, making it glitter in the bright Thai sunshine. Throughout its history, Wat Phra Kaew has undergone many renovations, restorations, and additions. As such, you get to see “200 years of royal history and architectural experimentation” when you visit. 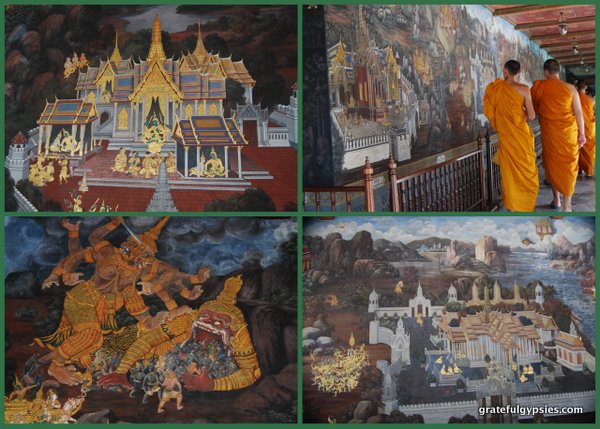 In addition to the stunning architecture, you can also admire the many murals that adorn the compound walls. In 178 different scenes, they tell the Ramakien (รามเกียรติ์ raam-gian) – the Thai national epic based on the Ramayana. To follow the story, begin at the north gate and move clockwise around the wall. 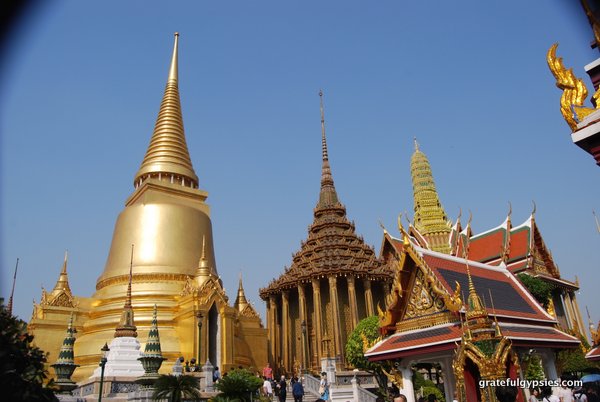 A must-see in Bangkok.

The palace grounds are open daily from 8:30-3:30, so be sure to arrive no later than 2 as you’ll want at least an hour and a half to properly explore. Admission is now a steep 500 Baht ($14), but it’s worth every penny. Guides are available from 10-2, and you can also use personal audio guides in a variety of languages. 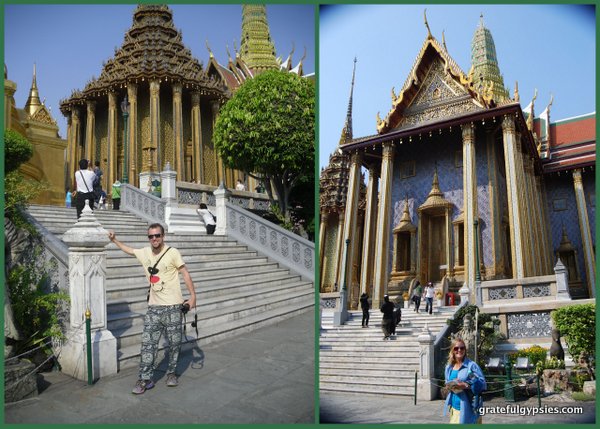 Most importantly, keep in mind that this is a very sacred place and thus has a dress code – no shorts, sandals, or revealing tops. If you’re like us and you don’t realize this before getting there, never fear! Ladies are able to borrow a shirt or shawl to cover their shoulders, and if you show up in shorts as I did, there are some super fashionable elephant pants for sale on the street outside the complex. 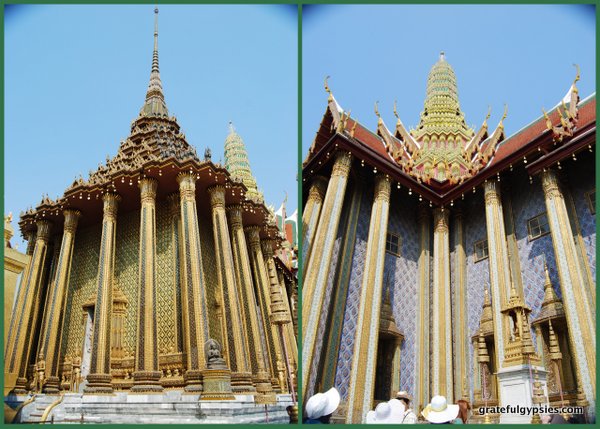 Watch it sparkle in the bright sunlight.

While Wat Phra Kaew is certainly the most impressive and most sacred temple in Bangkok, there’s a lot more to see. Check out our post about 5 Must-See Bangkok Temples, and brush up on your Temple Etiquette before visiting.