Punjab and Pakistan / آزادی مبارک ہو Posted by Rachael on Aug 15, 2018 in Uncategorized

With our world today so defined by national boundaries (قومی سرحدیں/qaumi sarhaden, fem. pl. noun) that we have come to perceive as rigid and existent from time immemorial, it is difficult to conceive of a time when such boundaries existed only in the imaginations of a few and most people’s lives and perspectives (نظریہ/nazariya, masc.) were not defined by arbitrary designations of border and nationality (قومیت/qaumiyat, fem.). Prior to the Independence (آزادی/aazaadi, fem. noun; آزاد/free, adj.) of India and Pakistan from British Rule at midnight on the 14th and 15th of August, 1947, the Indian and Pakistani states of Punjab that we now recognize were one broad swath of territory that today, as two distinct states that are part of different countries, still share rich linguistic and cultural elements. 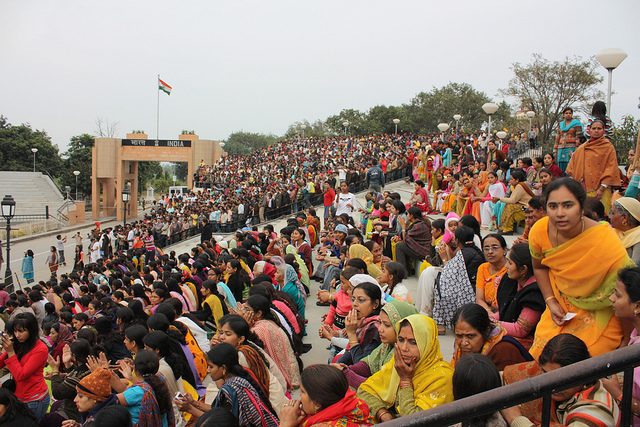 The border closing ceremony at the Wagah border; image by Arian Zwegers on Flickr, licensed under CC BY 2.0.

Now, as we approach the celebration of the Independence Days of Pakistan and India, on August 14th and 15th, respectively, it may be prudent to reflect on the brutal history (تاریخ/taarikh, fem.) that accompanied these days, often greeted with merriment today. It is difficult to conceive of the vast numbers of people who experienced displacement and violence due to Partition (تقسیم/taqseem, fem.). Essentially, over 14 million people were displaced according to their religion, which created a refugee catastrophe the likes of which it is difficult to comprehend, even today; people were desperate and terrified, not knowing what would happen from one day to the next, which resulted in widespread violence against people who were once beloved neighbors, but who were now construed as enemies based on a difference in faith (مذہب/mazhab, masc.).

The province of Punjab was particularly vulnerable to such violence and instability as it was home to a mostly Muslim population (آبادی/aabaadi, fem.) in its Western regions and a mostly Sikh and Hindu population in the East; in order to comply with the creation of Pakistan as a majority Muslim state and India as a secular one, Sikhs and Hindus living in the Western (مغربی/magribee, adj.; مغرب/magrib, noun) regions felt they should migrate to the East to ensure their safety, and the same was true for Muslims living in the Eastern (پوربی/poorbi, adj.; پورب/poorab, noun) regions.

Unfortunately, the governments (سرکار/sarkaar, masc.) of both countries (دیش/desh, masc.) were extremely ill-equipped to deal with this massive refugee crisis and the violence that accompanied it, resulting in a chaotic environment in which the rule of law, even if applicable, seemed irrelevant. Later, the eastern part of Punjab, now an Indian state, was further divided into what are now the states of Punjab, Haryana and Himachal Pradesh. Despite the divisions sown amongst people who were once neighbors (پڑوسی/parosi, masc. and fem.) due to political propaganda and the fear and uncertainty prevalent at the time, culture and language are strong unifiers and are thus capable of crossing even religious (مذہبی/mazhabee) and national boundaries. 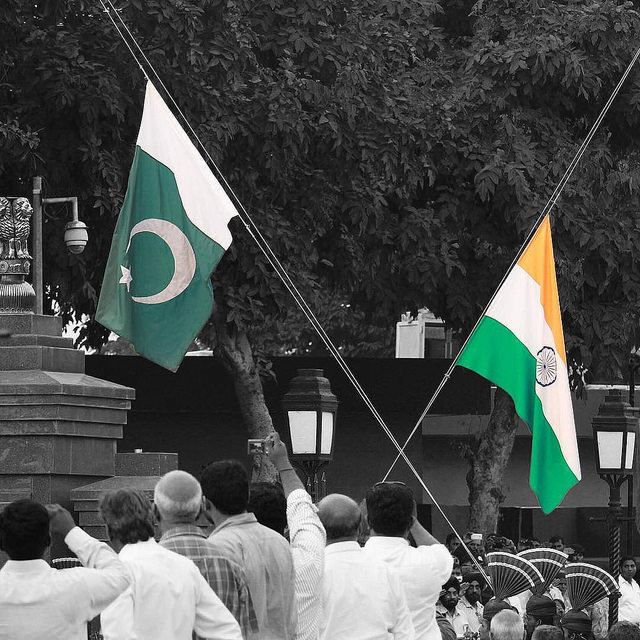 Evidence of this can be found today in popular culture, particularly music, such as in the following song, “Ki Banu Duniya Da” (“What has happened to the world/What has become of the world?” / دنیا کو کیا ہوا) that featured on Coke Studio India’s “Independence day” special, in which the Punjabi singers (گایک/gaayak, masc.) Gurdas Maan and Diljit Dosanjh bemoan the loss of South Asian traditions in the face of modernity and Westernization, including the hegemony of English as the global lingua franca to the detriment of South Asian languages (زبان/zabaan, fem.) like Punjabi, Hindi and Urdu. Interestingly, for this Independence Day special, Maan wrote additional verses to this traditional song (گانا/gaanaa, masc.) to express the sense of loss and cultural deterioration that the otherwise-joyous occasion of Independence Day leads one to reflect on.

Regarding Punjab and Pakistan, he sings that “this deal is not profitable for us,” (سودا/saudaa, masc.) referring to “Partition” as a sort of “business deal” that was not beneficial to the people it chiefly impacted: Indians and Pakistanis. He then refers to the Rivers Chenab (چناب), Ravi (راوی) and Sutlej (ستلج) as siblings (بھاٴی بہن/bhaai behen), once connected by geography as they traverse the Indian and Pakistani borders, but now separated by political dictates. He sings, “River Chenab often asks her sister River Ravi / How is my dear brother River Sutlej?” reflecting not only the division of the landscape but the sense of loss and estrangement felt by close neighbors and friends (دوست/dost, masc. and fem.) who, despite their mutual love for one another, were divided along religious lines by Partition. Concluding this section on Partition, the singer laments the fact that the “road to Peshawar is now distant and inaccessible” where previously it had been easier to reach this region. Moreover, he sings that “at the Wagah border / I look for those paths that once existed to Lahore, but sadly aren’t there anymore,” again expressing a division of the landscape that materially and negatively affects people’s lives on both sides of the border. 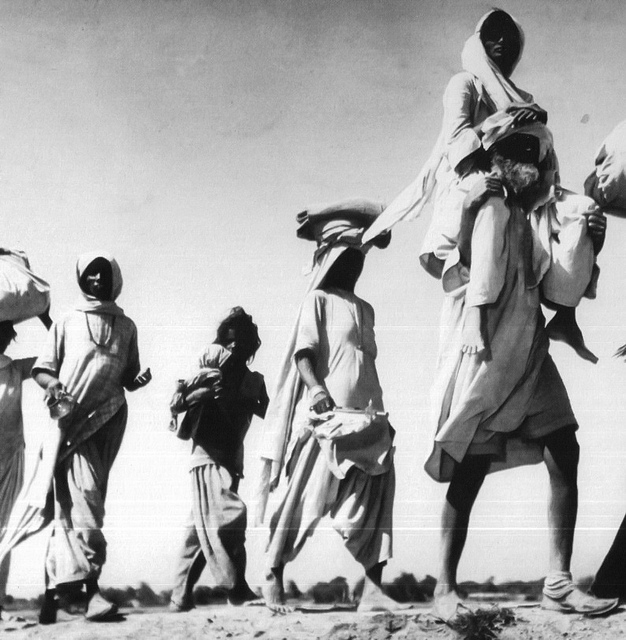 A few of the millions displaced by Partition; image by Dr. Ghulam Nabi Kazi on Flickr, licensed under CC BY-SA 2.0.

Although this division between the Pakistani and Indian sides of Punjab became law (قانون/qanoon, masc.), it could not stop the flow of culture and communication between remarkably similar people who had once peacefully coexisted. In fact, it is evident today that these two regions, despite national boundaries, cannot be completely separated due to the congruity of culture and language between them. In Pakistan today, about 44.7% of the population identifies as being part of the Punjabi ethnic group and another 48% of the population speaks Punjabi natively, far more than those who claim Urdu as a first or even second language (those who claim Urdu as a first language are at a mere 8%). Clearly, almost half of the population identifies strongly with Punjabi culture and language and that is further in evidence with the fact that many popular Pakistani songs are in Punjabi (such as those featured on Coke Studio Pakistan) and Punjabi is written both in the Gurmukhi script and the Nast’aliq (نستعلیق) script, the same script in which Urdu is written. As we can see here, language and culture are not subject to arbitrary political edicts that dictate national borders but are remarkable travelers (مسافر/musaafir, masc.), able to exist in many climes easily as long as the people who speak and practice them remain devoted to preserving them.