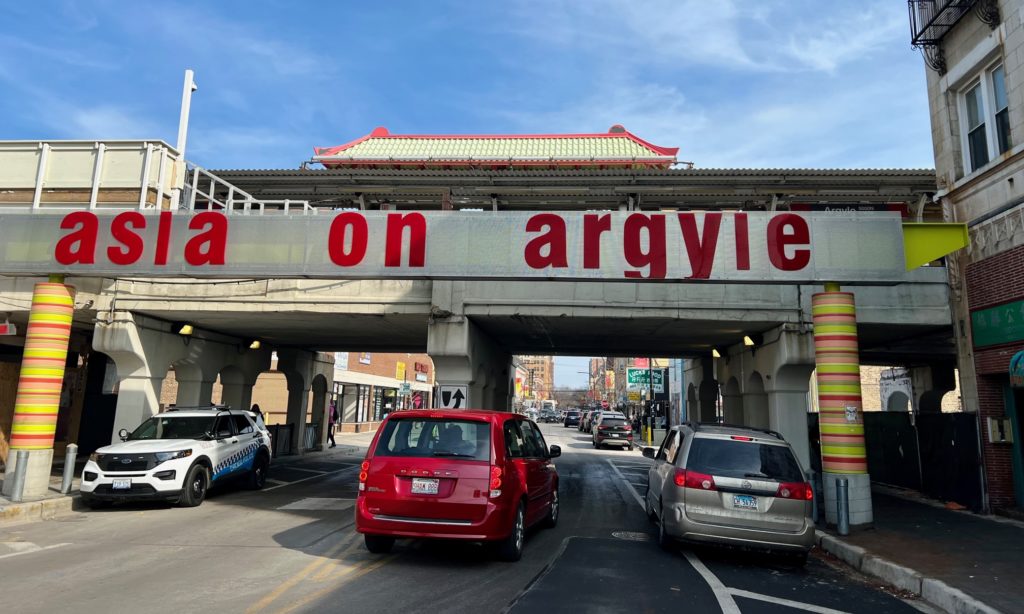 After the end of the Vietnam war, there was an influx of Vietnamese immigrants who resettled in the United States (U.S.), especially in the 80s and 90s. As a result, there are many “Little Vietnams” or “Little Saigons” established in big cities throughout the U.S., where one can find Asian groceries and Authentic Vietnamese restaurants. Over the next few weeks, I will introduce some of them to you through my blog posts. Perhaps you can visit one near where you live and immerse yourself in the language and culture of a Vietnamese-American community. One such neighborhood is “Asia on Argyle” on the northside of Chicago, Illinois.

Whenever I have a chance to visit Chicago, I always try to satisfy my craving for Vietnamese food in the “Asia on Argyle” neighborhood on Argyle street, located between N. Wintrop and N. Broadway streets. It is anchored by the Argyle L stop on the red line with its distinct, Asian-themed roof. But, don’t confuse Asia on Argyle with Chicago Chinatown on Chicago’s near southside. Argyle is much smaller, but caters more to Vietnamese, Cambodian, Thai, Laotian, and also Chinese immigrants. Many of Vietnamese who settled in Chicago were ethnically Chinese. 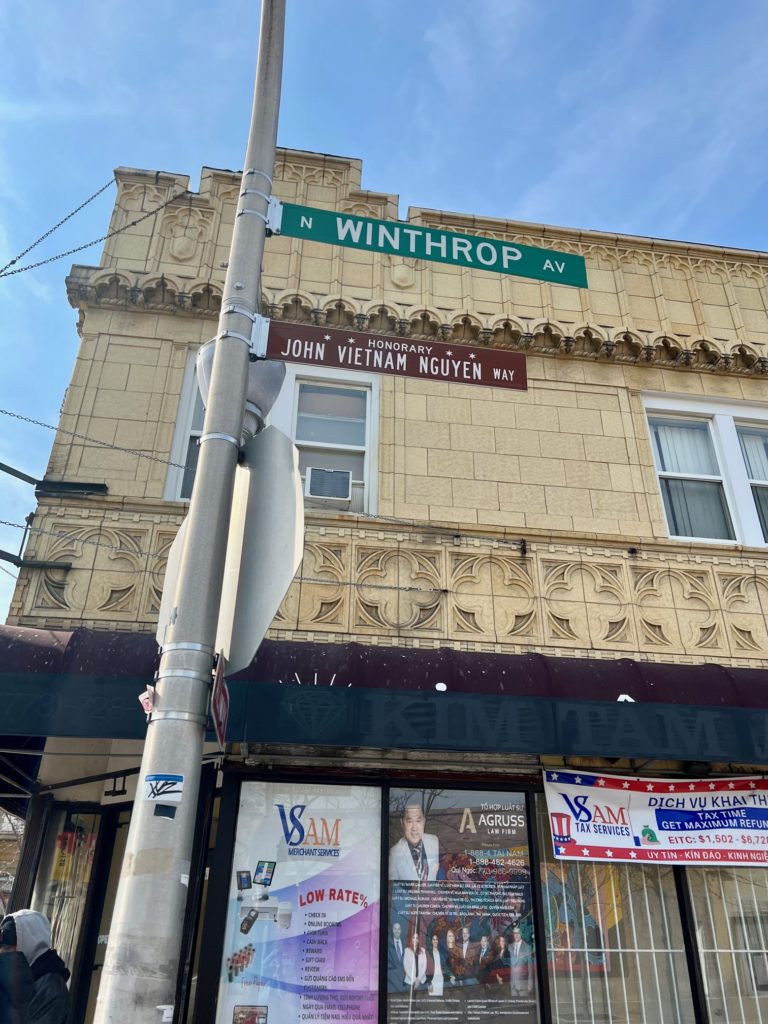 Last weekend, I had a chance to visit “Asia on Argyle” again. The area has a number of shops that were closed during the pandemic and seem to have struggled. The image was quite different before the pandemic. Walking up and down Argyle street, I found some interesting bức tranh tường (murals).

At the intersection of Argyle St. and Winthrop Ave, a surprising sign caught my eyes. It says “Honorary John Vietnam Nguyen Way” I’m ashamed to admit that I had no idea who John Vietnam Nguyen was. After a quick internet search, I learned John was a gifted, young, Vietnamese-American hip-hop artist raised in the Uptown neighborhood in Chicago. He tried to save his friend who panicked during a morning swim on Lake Michigan. The friend was rescued, but John drowned. The event happened in 2012. John was only 19, and a sophomore at the University of Wisconsin-Madison. The mural to honor him was created by his artist friends. With that, John was the first Vietnamese-American honored with a street named for him in Chicago.

Although Chicago’s “Asia on Argyle” is not as big as the ones in Southern California or in Houston, Texas, it has everything the Vietnamese need. There are many tiệm ăn (restaurant), chợ (market), and different dịch vụ (services) such as dịch vụ chuyển tiền (money transfer service), trung tâm y tế (medical center), etc.

Here you can find authentic Vietnamese food with many choices. There are tiệm phở (pho restaurant), tiệm mì (noodle restaurant), tiệm bánh mì (sandwich shop), tiệm bánh ngọt (patisserie shop), tiệm đậu hũ (tofu shop), etc. I had lunch at one restaurant, Hai Yen, on the strip and had a very good bò 5 năm món (5-course beef meal). For an appetizer, I ordered gỏi cuốn (spring rolls). Before leaving the strip, I stopped by chợ Nam Hoa (Nam Hoa market) to get a bunch of rau tươi (fresh vegetables), and a half gallon of sữa đậu nành (soy milk) at tiệm đậu hũ. I like the Vietnamese sữa đậu nành because it has a lighter taste than the normal sữa đậu nành that you find in American markets. I also bought some bánh mì (sandwich) from Ba Le on Broadway Street. You might be surprised to find that there are amazing, French-inspired bakeries and cafes in these “Little Vietnam” neighborhoods, a legacy of the French colonization of Vietnam and the adoption of some of its cuisine.

I really hope that this “Little Vietnam” area will prosper and have a fast, post-pandemic recovery. Although the shops and restaurants here are not fancy, or well decorated, it gives me a sense of coming home, warm and friendly. Have you visited Chicago’s Little Vietnam? What is your favorite part of this neighborhood? What other neighborhoods around the country should I feature? Please send me your thoughts in the comments below.