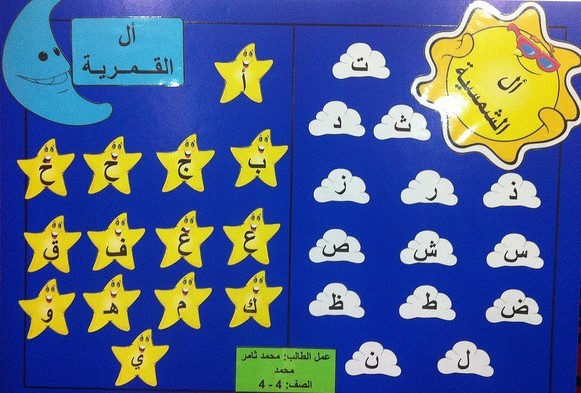 Typographically, we simply add ال to the beginning of the word. However, this addition can bring about a change in pronunciation. That is, the letter/sound /l/ gets assimilated with certain letters. This results in classifying the letters that follow the /l/ into two categories: ‘moon letters’ and ‘sun letters’. ‘Moon letters’ are those that don’t cause /l/ to assimilate, and ‘sun letters’ cause /l/ to assimilate, as in these examples: (see the image above for a complete inventory)

This phenomenon is governed by the place of articulation, i.e. the point in the oral cavity where the /l/ is produced. Put simply, if the letters following ال are produced in the same area of oral cavity where the sound /l/ is articulated or from the adjacent area, then the /l/ of ال is assimilated causing the ensuing sound to become a geminate (i.e. sound with shaddah see this post). On the other hand, if the letters following the /l/ are produced from an area that is far from the area in which /l/ is articulated, then the /l/ of ال does not assimilate to the subsequent letters/sounds, as in the above ­­examples. More specifically, in the word السَّاعَةُ, the /l/ is not pronounced; instead, the س becomes a geminate. Conversely, in the word البَيْتَ, the /l/ is pronounced clearly.

In addition to the change in pronunciation, ال induces a grammatical change. Since it marks definiteness, the twaneen, which marks indefiniteness, is supplanted with the corresponding diacritical mark. That is, instead of tanween al-fatH, a fatHah is added to the end the noun and/or adjective, kasrah for tanween al-kasr, and dhammah for tanween ­al-dhamm, as in the first set of examples above. It is worth noting that if you stop on final sound of a word neither of the three diacritical marks is articulated. That is called waqf, which is represented by a sukoon. Thus, السَّاعَةُ /as-sa’atu/ is pronounced as السَّاعَةْ /as-sa’ah/.

a) make the following indefinite words definite adding the necessary changes, and try articulating them loudly.

b) having added ال to the above words, now classify them according to whether or not /l/ of al- is assimilated under two columns “letters of the moon” and “letters of sun”.

c) complete the sentences with the correct form of the word in brackets (i.e. adding tanween and al- suitably, context gives hint of what to use). Answers will be given and explain in the next post.

Another aspect of ال that is worth noting is that it is fully or partially assimilated in connected speech. That is, with ‘the letters of the moon’ the alif of ال is not pronounced. With ‘sun letters’, alif is not pronounced but the geminate with the letter that follows is retained. This is explained in the next post.