In an earlier post, you learned that short vowels الحَرَكَات القَصِيْرَة in Arabic are not represented by letters; rather, they are diacritical marks that are placed over or below regular consonant letters. These short vowels are the fatHah الفَتْحَة, the kasrah الكَسْرَة, and the DHammah الضَّمَّة. In addition, there are two other essential marks: the sukuun السُّكُون and the shaddah الشَّدَّة. A less common diacritical mark is the tanween التَّنْوِيْن. This post provides you with the basic information that you need to know about diacritical marks in Arabic. 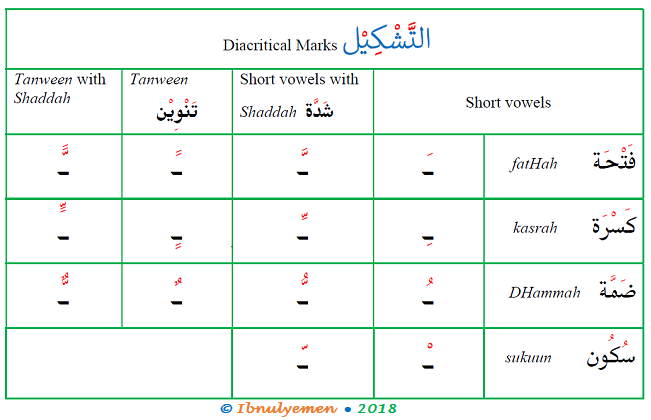 The shaddah indicates the doubling of a letter. It is normally a sequence of two identical letters, the first with sukuun and the second with a short vowel. For instance, the letter م with a shaddah will be written and pronounced in four different ways, as in this example:

The shaddah with tanween is the doubling of letters that only occur at the end of singular indefinite nouns. The first letter has a sukuun and the second has a tanween, so they are combined into one with the tanween, as in:

The fourteen diacritical marks listed in the table above are called عَلَامَات الشَّكْل ‘alaamaat ash-shakl, which literally means the ‘tools of controlling the word’, namely controlling the pronunciation, the meaning, and the grammar. 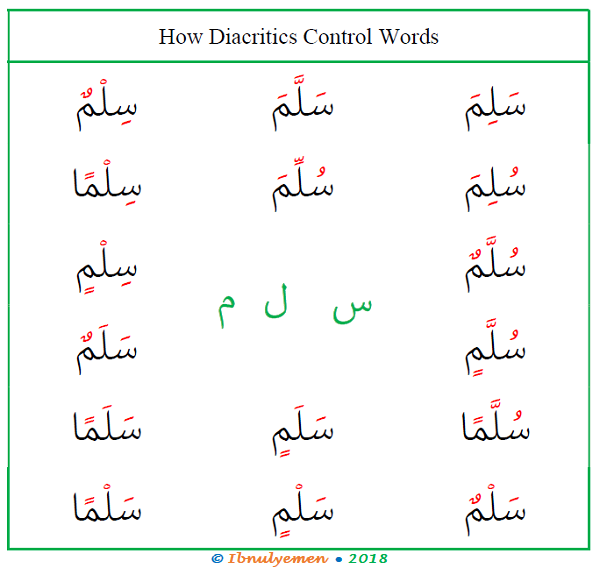 As you can see in the table above, the use of diacritical marks generates sixteen different words from a single root word that comprises three letters س ل م, the decomposed word in green. The difference between these words is either in meaning or grammar, in addition to pronunciation.

Let’s consider the first three words in the first line in the table. These words have the same component letters, and the only difference between them is the diacritical marks which make them three completely different words with respect to meaning. The first word سَلِمَ salima means ‘to be secure’, the second سَلَّمَ sallama means ‘to surrender’, and the third سِلْمٌ silmun means ‘peace’

Looking at the last line in the table, the meaning of these three words is the same, that is ‘peace’. The different between them is in the tanween, which indicates the function of the word in a sentence. They are nouns, but one occurs in the subject position, one in the object-of-verb position, and one in the object-of-preposition position.

For a native speaker of Arabic, when these words are used in a context, it is easy to understand the difference between them without diacritical marks; however, it is important for a learner of Arabic as an additional language to learn how to use and assign these diacritical marks every time he/she encounters or learns new words. In addition to improving his/her pronunciation, it leads to faster and more enjoyable learning.

Here are more examples of orthographically similar words that are disambiguated by diacritical marks: