Basic Arabic: The Noun and Its Forms Posted by Ibnulyemen اِبْنُ اليَمَن on Sep 27, 2018 in Arabic Language, Pronunciation, Vocabulary

A word in Arabic can be a noun اِسْم, a verb فِعْل, or a particle حَرْف. The Noun الاِسْم al-ism stands for something that can be concrete or abstract. It can be indefinite or definite; singular, dual, or plural; masculine or feminine. In a sentence, it functions as a subject (of verbal and nominal sentences) or an object (of a verb and a preposition). This post explains the basic forms of the noun in Arabic. 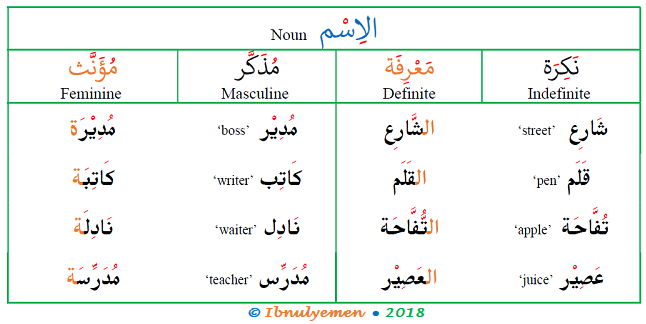 An indefinite noun is called نَكِرَة nakirah. It does not refer to a specific object / thing. In Modern Standard Arabic, it is marked by tanween. In other words, tanween that is added to the end of singular nouns marks indefiniteness (NB: in the list below, tanween is not added). There are three ways to change it to a definite noun, i.e. مَعْرِفَة ma‘rifah. The most common way of these is by adding the definite article ال to the beginning of the indefinite, as illustrated in the below:

The reason for calling them sun letters and moon letters is the sharp contrast between these two one-of-a-kind heavenly objects. Sun in Arabic is شَمْس and moon is قَمَر. When adding the ال to the beginning, they become الشَّمْس (pronounced as اَشَّمْس) and القَمَر (no change in pronunciation). Therefore, the assimilation of ل to ش in الشَّمْس is taken as a representation of the sounds to which the ل gets assimilated, hence called sun letters الحُرُوف الشَّمْسِيَّة. Similarly, the non-assimilation of ل to ق is taken as a representation of the sounds that block the assimilation of ل, so they are called moon letters الحُرُوف القَمَرِيَّة.  The following examples illustrate further.

A singular مُفْرَد mufrah noun refers to one person or entity; a dual مُثَنَّى muthanna refers to two; and a plural جَمْع jam‘ refers to three or more. The dual is derived from the singular by adding ـان regardless of the type of singular (i.e. animate, inanimate, masculine, or feminine). The plural is a little more complicated. There are two types of it: sound plural الجَمْع السَّالِم al-jam‘ as-saalim and broken plural جَمْع التَّكْسِير jam‘ at-taksiir. The sound plural is regular and is derived from the singular by adding ـون in the case of the masculine, and ـات in the case of the feminine, as in the list below. The broken plural is irregular. It has different forms and multiple rules; therefore, it is not explained here.

Generally, nouns that end with ـة are considered feminine nouns even if they refer to entities other than human, as in these examples: