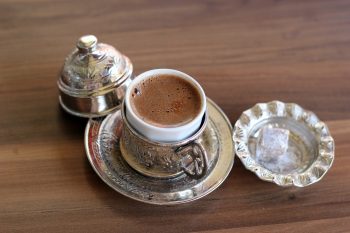 As is the case with most cultures all over the world, people tend to attach a specific social meaning to food. However, food has a far more special place in the Arab world. In addition to being symbolic of hospitality, serving food and eating together is a social ritual and plays a huge role in building relationships with strangers and friends alike. To Arabs, food is a form of entertainment and the most central element in any social gathering.

Social gatherings revolve around good food. For example, if I visit a close friend even for an hour or less, and I leave without eating or drinking anything, it is very likely that she’d say:

which means >> (But you still haven’t drunk anything).

This phrase is an invitation for me to stay longer and have at least a drink. If anything, this shows that having a chat is not as great as when it is accompanied by food, or better preceded by it.

Food can also be a good way to start a relationship with a stranger or even a conversation opener. You might remember that Arab colleague or co-worker who keeps offering you food out of the blue, with a smile on their face. If an Arab offers you food and they insist that you have something, don’t worry, they are not trying to bribe you! Offering food is a polite gesture in the Arab world and a sign of endearment or just an indirect way of showing someone you care about them. So, an Arab’s way of getting to know someone better is usually to invite them to lunch or dinner. It is the mere act of eating together that is believed to be bringing people together.

There is a common phrase which Arabs use as an explanation for why they would like to invite someone. In the Levantine dialect, people say:

which means (So we have bread and salt together). They are obviously not going to invite you over for bread and salt, but it is used metaphorically to mean that having food together is a nice way of breaking the ice and having a more relaxing chat together. It is also an ‘extra’ sign of respect to invite people to eat at one’s place and not at a restaurant as Arabs really appreciate homemade food and take pride in their traditional dishes.

Finally, food is sometimes (but not always!) used to handle difficult or awkward situations. If somebody wants to ask a big favour or maybe introduce or discuss a sensitive topic, inviting the other person for food first is usually a good way of making that discussion go slightly smoother.