How much do you know about this Arabic country? Posted by Hanan Ben Nafa on Jan 3, 2018 in Arabic Language, Culture, Uncategorized, Vocabulary

Libya is an Arabic country دولة عربية  that is located in North Africa شمال إفريقيا , with a coastline on the ساحل مُطلّ على  Mediterranean Sea البحر المتوسط . Libya is bordered by more famous Arabic countries, such as Egypt to the east الشرق, Tunisia to the west الغرب and Sudan to the South الجنوب .  A large portion of the country is made up of desert الصحراء . Below, we’re going to learn about five specific aspects about Libya and these are: Demography, Ethnicity, language, climate and cuisine. 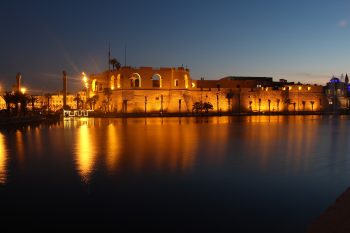 Despite its small, homogenous population, the Libyan social structure is a bit complicated. Libyans are not just Arab in terms of ethnicity as some of them claim to be Berber/ Amazigh أمازيغ and tend to inhabit the Jabal al Gharbi District منطقة الجبل الغربي. Another minority أقلية  is a different group of Berber, which are Tuareg الطوراق and Toubou التبو, who live in the Sahara, in the Southwestern parts of Libya.

Standard Arabic is the official language  اللغة الرسمية in Libya, however, the actual spoken language that people use on a daily basis is Libyan Arabic. In addition to Libyan Arabic, there is Berber language اللغة الأمازيغية, which is spoken by around one million people, particularly in the west. Some of the cities where Berber is spoken is Zwaarah زوارة,  Ghadames غدامس and several cities in Nafusa Mountains جبل نفوسة , such as Jadu جادو, Yafran يفرن  and Kabaw كاباو .

There is a large number of words that are derived from the Italian language, or what is called loanwords الكلمات المستعارة . Most of these words are mainly utilised in everyday life. Few examples would be: Cucina (Kitchen) and is pronounced as (Kujeena) in Libyan Arabic.

Because of its desert environment بيئتها الصحراوية, climate in Libya is very dry جاف جداَ  and mostly very warm دافيء or hot  ساخن during the summer, which is gradually becoming the longest season of the year. Libya is known for its nice beaches due to its long coastline on the Mediterranean Sea. 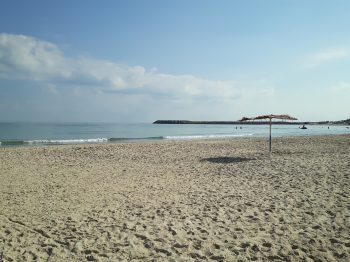 The Libyan cooking style is a very unique one and is a blend of the Bedouin بدوي  and North African style. Some of the traditional meals are: couscous كسكسي  (kusksi) (steamed wheat semolina سميد القمح  and tomato sauce with vegetables), Bzeen بازين (Bazeen) and Arabic soup or Sharba ʕarbiya شربة عربية.

It’s also influenced, to a great extent, by the Italian cuisine (due to the Italian colonisation الاستعمار الإيطالي of Libya, which started in 1910). This is why Libyans consume more pasta معكرونة  and not much rice أرز unlike the case in the Middle Eastern Arabic countries الدول العربية الشرق أوسطية . Pizza بيتزا  and lasagne لزانيا  are also some of the popular meals in Libya.