Locked down together during Ramadan Posted by Hanan Ben Nafa on May 1, 2020 in Arabic Language, Culture, Vocabulary

From the beginning of Ramadan, I’ve been following a comic show on YouTube called كملت معي  Kimle-t ma-ʕi and I would like to share with you its theme song or الشارة  iš-šaarah as it’s called in Syrian Arabic (the variety used in the show). The show’s theme song can give you the gist of what the show is about! To help you with this, I will provide the English translation of the lyrics of the song. 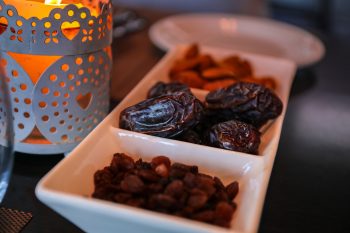 Image by Naim Benjelloun on Pexels.com

The plot of the show:

The show is produced by a Syrian guy شاب سوري called Amroعمرو  (here’s his Channel) who lives in France and has been uploading funny videos from the comfort of his house for years now, utilising مستخدمًا his acting talent موهبته في التمثيل to criticise لانتقاد his society مجتمعه in a funny style بأسلوب مضحك.

The show كملت معي  is about the main female character أم سوزان  Um Suzaane who has to take care of her family (Abu Suzanne أبو سوزان , Suzaane سوزان  and Malaak ملاك ) and feed them during Ramadan. For Um Suzaane, what’s terrible about this Ramadan is that her father as well as three members of her husband’s family (whom she doesn’t get along with at all لا تنسجم معهم أبدًا) came to visit her while the ambulance came to take some neighbours to the hospital as it turned out they have Covid-19. The family were told they need to self-isolate together and not to leave the house! This means that she will need to cook for seven people, which is a nightmare for her.

The song is an expression of her frustration إحباطها with the situation تجاه الموقف she finds herself in الذي وجدت نفسها فيه . The show is about the way Um Suzaan decides to deal effectively with every one of them in order to eliminate problems تقليل المشاكل between them.

*The translation is not literal but it’s there so you can understand the conveyed meaning.

The Worst has happened

I’m fed up with this situation

The holy month has arrived

I’m stuck in the quarantine

What’s coming is much greater (worse)

I got locked down in the same house

With people I really love

I was forced to quarantine for a month

I hope Allah will make these days pass

A death sentence would have been easier than this

I swear, the house will be in order

Yeah, but they’ve met their match

Don’t blame me, I just got mad

(please) someone take me to China

The Worst has happened

I’m fed up with this situation

The holy month has arrived

I’m stuck in the quarantine

Explanations of some expressions:

Literal meaning: it totally ended with me.

Actual meaning: the worst has happened.

*A ready expression used when someone can no longer bear a situation.

Literal meaning: I’m going to blow up because of oppression.

Actual meaning: I’m so sick/tired of this.

*A ready expression used when someone is very fed up or frustrated.

Meaning: I was quarantined.

This verb “inhajar-t” is in the passive voice and it’s related to the noun “hajer” حِجِر, i.e. quarantine.

Meaning: Easier for me.

Actual meaning: But they’ve met their match. It also means something like: “They can’t mess with me”.

*A ready expression used when someone intends to handle difficult people or rivals.