Previously, you were acquainted with the types of sentences in Arabic. Based on the part of speech of the word with which it starts, the sentence is verbal فِعْلِيَّة or nominal اِسْمِيَّة. The verbal must at least have a verb فِعْل and a subject فَاعِل to be meaningful. In this post, you learn the common negation نَفْي of verbal sentences. 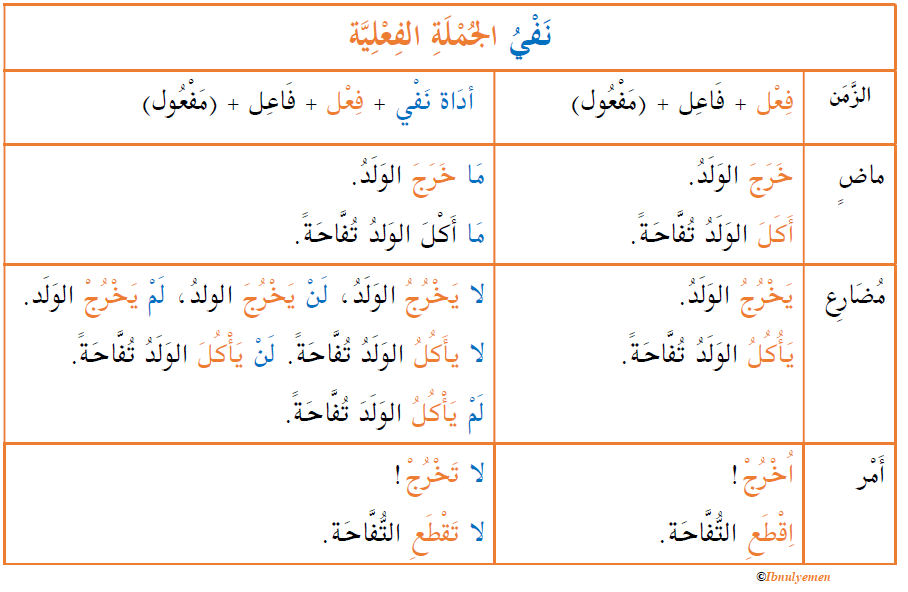 To make a verbal sentence negative, we simply add the appropriate negative particle أدَاةُ النَّفْي before the verb. Listed in the table above are the most common negative particles that are used in everyday communication. These are مَا, لا, لَنْ, and لَمْ.

Negating the Past Tense Verb:

To negate the present tense, three different negative particles can be used: لا, لَنْ, and لَمْ. Like مَا, the particle لا does not cause a change in the verb form. It simply negates the meaning, so يَخْرُجُ الوَلدُ ‘the boy goes out’ becomes لا يَخْرُجُ الوَلَدُ ‘the boy does not go out.’ Here are more examples:

Unlike لا, the two present particles (لَنْ and لَمْ) cause a change in tense and case. لَنْ changes the tense of the verb into the future; therefore, يَخْرُجُ الوَلَدُ, which means ‘the boy goes out’ at the present time becomes لَنْ يَخْرُجَ الوَلَدُ ‘the boy will not go out’ in the future time. Besides, the verbal final diacritical mark becomes fatHah instead of DHammah. Here are more examples:

In the case of لَمْ, the tense of the verb changes to past, so يَخْرُجُ الوَلَد ‘the boy goes out’ becomes لَمْ يَخْرُجْ الوَلَد ‘the boy did not go out.’ Besides, the verb final diacritical mark changes from DHammah to sukoon. Here are more examples:

To negative the imperative form of the verb, we simple add the particle لا before the verb. Hence, اُخْرُجْ! ‘go out!’ becomes ‘don’t go out!’ The negative particle simple negate the command. Here are more examples: