In an earlier post, I focused on one type of Arabic sentences, the verbal sentence الجُمْلَة الفِعْلِيَّة. As its name suggests, it is the sentence that starts with a verb فِعْل. In like manner, the nominal sentence الجُمْلَة الإِسْمِيَّة, our focus in this post, is the sentence that starts with a noun اِسْم. This type has two parts: the subject (or topic) المُبْتَدأ and the predicate الخَبَر. 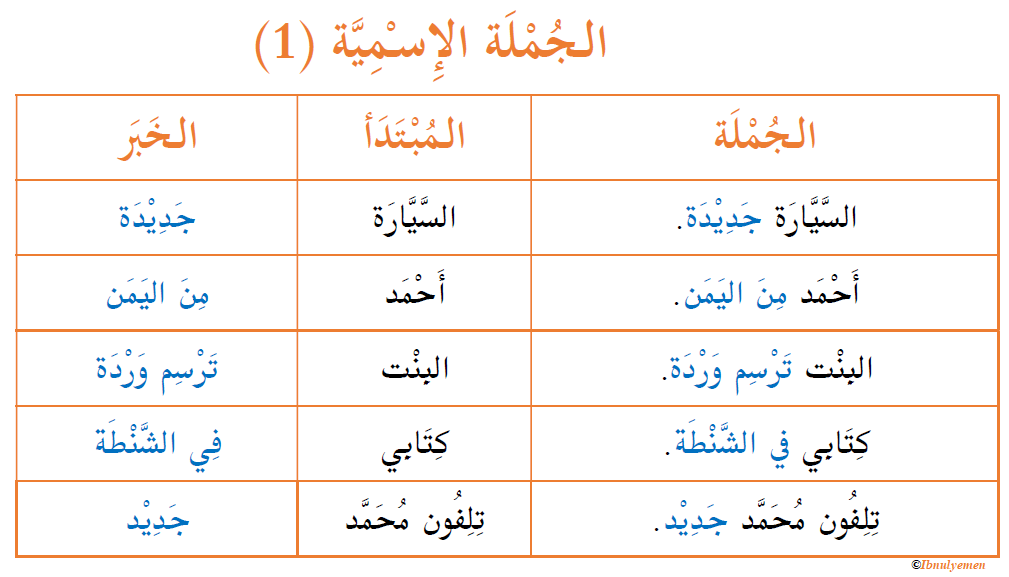 الخَبَر literally means ‘anything that we tell about someone or something.’ As a part of the nominal sentence, it can be one of three types: a noun/adjective, a semi-sentence (i.e. a prepositional phrase), or a verbal sentence. If it is a noun/adjective, it must be indefinite, i.e. نَكِرَة. If not, it would not make sentence. A semi-sentence is called شِبْه جُمْلَة in Arabic. It is basically a preposition followed by a noun, that is a prepositional phrase. A verbal sentence is a verb (in the present or past) followed by a subject and an object (which can be optional), as in (B).

فِي البَبْتَ ‘ in the house’

As indicated, we must start with the subject (topic) مُبْتَدَأ and then follow it with the predicate الخَبَر. Putting the phrases in (A) and (B) together, we form completely meaningful nominal sentences, as follows:

Looking the same table, you can see that every predicate belongs to one of three types. جَدِيْدة and جَدِيْد  are indefinite adjectives (i.e. they don’t have الـ). مِنَ اليَمَن and فِي الشَّنْطَة are شِبْه جُمْلَة, i.e. prepositional phrases, and تَرْسُم وَرْدَة is a verbal sentence.

If the subject المُبْتَدَأ is not a definite noun, the formed sentence is not a sentence; rather, it is a phrase, as in these examples:

Likewise, if the predicate الخَبَر is not an indefinite noun/adjective, it makes a phrase instead of a sentence, as in these examples:

In forming a basic nominal sentence, the subject المُبْتَدَأ and the predicate الخَبَر must agree in gender and number, as in these examples: