Basic Sentence Structure in Arabic (I) Posted by Ibnulyemen اِبْنُ اليَمَن on Sep 14, 2017 in Grammar, Vocabulary

Structurally, there three types of sentences in Arabic: the basic الأَصْلِيَّة, the compound الكُبْرَى, and the clausal  الصًّغْرَى (i.e. a clause). The basic, which can be either verbal فِعْلِيَّة or nominal اِسْمِيَّة, has two parts. In the case of the verbal, which is our focus here, the first part is the verb الفِعْل and the second is the subject الفَاعِل. Following are some essentials that you should help you make communicative basic verbal sentences. 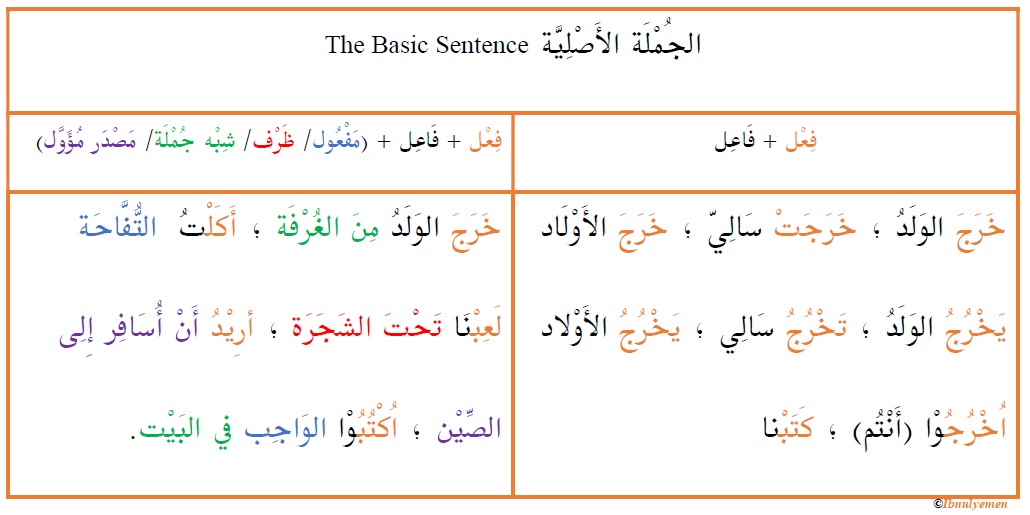 The verbal sentence always starts with a fully conjugable verb. The verb can be perfective (past), imperfective (present), or imperative (command). Only particles, such as قَدّ qadd ‘maybe, already’, مَا maa ‘not’, لا laa ‘not’, لِـ li- ‘why not, shall we’, among others, can precede the verb. Here are some examples:

It is an action sentence (i.e. expresses an action). The action is represented by the verb, and this why it should be put at the beginning. If a sentence begins with a noun, then the noun becomes the focus, and the sentence becomes declarative (i.e. states a piece of news of some sort). To illustrate, let’s invert the order of the first two examples above:

Parts of the Verbal Sentence:

For a verbal sentence to be meaningful, it should be composed of two essential parts: the verb الفِعْل and the subject الفَاعِل. The verb by itself does not constitute a complete meaning. If you come across a meaning sentence composed of one word, such as اُكْتُبْ uktub ‘write!’, it means that its subject is implicit (i.e. it not overt, rather it is implied within the verb, known مُسْتَتِر  in Arabic).

The remaining parts of the sentence are called مُكَمِّلات complements. They can be an object مَفْعُول, a prepositional phrase شِبْه جُمْلَة, an adverb ظَرْف, among others. They complete the verb or the subject. See the table at the top for illustrations.

The Type of Subject:

The subject of the verb can be اِسْم ظَاهِر ism DHahir ‘an overt noun’ (i.e. proper noun, common noun, interrogative noun and so forth) ضَمِيْر Damiir ‘a pronoun’. The pronoun can be مُتَّصِل muttaSil ‘attached’ or مُسْتَتِر mustatir ‘implicit’. The subject can also be مَصْدَر مُؤَوَّل maSdar m’awwal ‘a noun clause’. For now, we will focus on the first two. Here are some examples:

(a) overt noun subject:

(b) covert/implicit or attached pronoun subject:

The subject can also be singular, dual or plural. In terms of gender, it can be masculine or feminine, as in:

As for the gender, the verb must agree with the subject. That is, if the subject is feminine in form, the feminine marker, which is ـتْ (ت with sukoon) should be appended to the end of the perfective (past) verb and تَـ (ت with fatHah) should be added to the beginning of the imperfective verb, as in these examples:

As to number, if the subject an overt noun, the verb remains singular in form even if the subject is dual, plural, or compound (more than one doer/actor). If the subject is attached or implicit pronoun, the agreement is reflected on the verb through the respective pronominal suffixes, as illustrated above.