The Arabic morphological measure المِيْزَان الصَّرْفِي is a measure that is proposed by Arabic grammarians to know and weigh the structure of words. It helps in understanding the internal structure of words, namely knowing whether the constituent letters of a word are essential or additional, and in deriving new words from the same root. The bulk of words in the Arabic lexicon are tri-consonantal (i.e. of three letters). This is known as the root. Therefore, Arabic grammarians proposed a measure of three letters: ف, ع, and ل (فَعَلَ). This post is about the Arabic morphological measure and how it works. 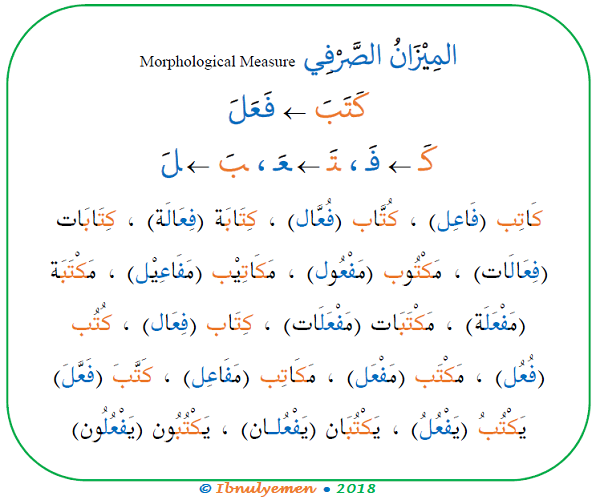 The letters of the Measure:

How It Works with Root Words:

The measure works well and consistently with tri-consonantal root words as each letter in the word is matched with a letter in the measure. If the root word has four essential letters, we add one more laam to the measure. For example, بَعْثَرَ ‘to scatter’ and دَحْرَجَ ‘to roll’ are both weighed as فَعْلَلَ. If the word has five essential letters, we add two more laam to the measure, as in سَفَرْجَل which is weighed as فَعَلَّل (فَعَلْلَل).

How It Works with Complex Words:

How It Works with Four-letter Words:

If the additional letter is a repetition (or a geminate) of another letter in the root word, we simply repeat the corresponding letter in the measure. For example, عَلَّمَ ‘to educate’, قَدَّمَ ‘to present, introduce’, and قَطَّعَ ‘to cut into pieces’ are weighed as فَعَّلَ, that is by repeating the ‘ain of the word, عَيْنَ الكَلِمَة. Words like شَدَّدَ ‘to emphasize’, هَدَّدَ ‘to threaten’, and جَلْبَبَ ‘to put a garment on’ are weighed as فَعْلَلَ. To explain, in شَدَّدَ (شَدْدَد), the first letter ش is فَاء الكَلِمَة, the second letter دْ is عَيْنُ الكَلِمَة, the third letter دَ is لامُ الكَلِمَة, and the fourth letter is a repetition of the third, so we add laam to the measure, hence شَدَّدَ = فَعْلَلَ.

If the additional letter is neither essential nor a repetition of the root word; instead, it is a letter of addition, we simply insert it the measure according to its occurrence in the word. For example, in كَاتِب ‘writer’, the root is كتب, and it is measured as فعل. The letter of addition is alif and it occurs after ك (which is the fa’a of the word فَاءُ الكَلِمَة), so we insert it after the ف in the measure, hence كَاتِب is weighed as فَاعِل; مَكْتُوب is weighed as مَفْعُول; مَكْتَب is weighed as مَفْعَل and so forth.

How It Works with five-or-more-letter Words:

The letters of addition in Arabic are ten: أ/ء, ا, ت, س, ل, م, ن, هـ, و, ي. To remember them easily, they are put in the words / phrases: أَمَان وَتَسْهِيْل, هَنَاء وَتَسْلِيْم, or سَأَلْتِمُوْنِيْها. When we weigh a word that has letters of additions, we simply inserted them where they occur in the measure after identifying the root word. For example, in the word اِنْكَسَرَ ‘breaks (by itself)’, the root is كَسَرَ which is weighed as فَعَلَ and the letters of addition are alif and nuun اِنْـ, and they occur before the فَـ, so we insert them before the فـ in the measure, hence اِنْكَسَرَ is weighed as اِنْفَعَلَ. Similarly, اِسْتَغْفَرَ ‘to seek forgiveness’ is weighed as اِسْتَفْعَلَ; قَاَتَلَ ‘to fight one another’ as فَاعَلَ; تَكَلَّمَ ‘to speak’ as تَفَعَّلَ; and so forth.