The story behind this Egyptian Proverb Posted by Hanan Ben Nafa on Aug 7, 2020 in Arabic Language, Culture, Vocabulary

In today’s post, we’re going to learn a new Arabic proverb  مثل (شعبي) عربي and study its use and the story behind it.

>> The proverb, which is in Egyptian Arabic, is as follows:

Don’t sell water in the village of water sellers

Don’t get yourself involved in an argument with those who have more knowledge on a certain topic or matter than you do. 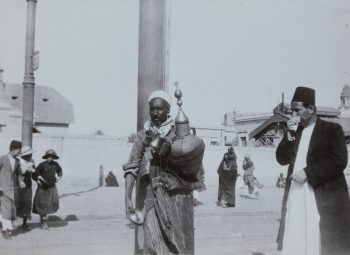 Image by Museums Victoria on Unsplash.com

This proverb is mainly used in Egypt but is also generally known in the Arab world. The proverb is used in a situation where a person attempts to be smart and do something witty and fails!

As a reference, I used the video below (in Egyptian Arabic) that talks briefly about the proverb and its origins. Below is a summary of the content of the video. You can watch it, if you’re interested in Egyptian Arabic and would like to practice more 🙂

*About the village عن الحارة

It was believed that the village of “water sellers” is an imaginary place مكان خيالي and doesn’t really exist. However, the village is an actual place مكان حقيقي  (2000 year old) and is located in the heart of the Egyptian capital قلب العاصمة المصرية. Around a hundred years ago, this village used to be a residential area for the largest group of water sellers who would meet in that village and sell water to people by carrying water on their backs عن طريق حمل المياه على ظهورهم, using old traditional type of bottles (made out of animals’ skin جلد الحيوانات, particularly that of goats) called “Qirab” قِرَب or “Erab” (in the Egyptian dialect), which is the plural of “Qirba” قِرْبَة or “Erba” that was used to keep water cool التي كانت تستخدم لإبقاء المياه باردة before electricity was invented قبل اختراع الكهرباء.

The person who sells water is called السّقّا  essa’a (plural is سقايين), meaning the person who waters others, derived from the verb y-asqi يسقي  in Standard Arabic.

Since حارة السقايين  is the place where water sellers are found, water was always available الماء كان متوفر دائمًا  and so no one sells water anyway! However, some men who were new to the profession tried to sell water there and failed miserably فشلوا فشلًا ذريعًا  until told by an old man that it won’t work because of the lack of demand for قلة الطلب على  water there. Since then, the proverb has been used to make fun of someone للسخرية من شخص who lacks common sense ليس لديه منطق.

As a popular proverb, the iconic Egyptian singer Mohammed Muneer has a song (watch below) that’s called حارة الساقيين  and below are a few lines where the story of the proverb is referred to:

If you came to sing, go and ask about who I am first

Don’t sell water in the village of water sellers

*A link to the lyrics of the song can be found here.