Where did the Arabic names of months come from? Posted by Fisal on Jan 21, 2015 in Arabic Language, Culture, Vocabulary 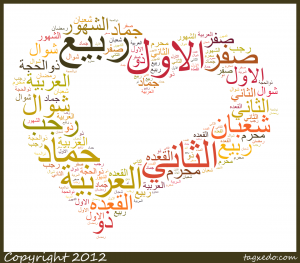 The Arabic Months by Rokeya Hassan

The name literally means “forbidden” and the Arabs used to abstain from any act of fighting, killing or aggression during this month (and during three other months called The Forbidden Months الأشــهــر الــحــُــرُم). It is the first month in the Arabic Hijri Calendar.

Literally means “void” and the month was named like that maybe because pagan Arabs used to go on raids on other tribes emptying their homes or their opponents’ homes.

Literally meaning “the first spring” and the name happened to appear at the beginning of spring.

It means “the last spring”. The month is also called Rabi’ Al-Thani ربــيـــع الــثـــانــي which means “the second spring”. The reason for this reason is that because it was named at the end of spring season.

Literally means “the last time of parched land”. It is the same meaning as the previous month but it marks the end of that time when the land becomes parched or dry. The month is also called Jumada Al-Thaniyah جــُــمــَــادى الــثــانــيـــة (The Second Jumada).

It is one of the Forbidden Months. Arabs took away their arrows from the bows and gave up any fight during those four months. It means “respect or honor”.

It was named like this because Arabs used to disperse in this month seeking water and grass.

It literally means “burning” and was named at the hot season in the desert of Arabia. It is also the sacred month of fasting for Muslims.

The name refers to what happens to the female camels when they are in calf. They become thinner and shorter in giving milk during that time of the year.

It literally means “the one of truce”. Arabs sat in this Forbidden month and ceased fight.

The literal meaning is “the one of pilgrimage”. It is the holy sacred and Forbidden month when Arabs and Muslims performed their Hajj (pilgrimage) to Mecca.