Located in the Northeast region of China known as Dongbei (东北 – dōng běi), the city of Harbin (哈尔滨 – hā ěr bīn) is one of the top places to visit in winter. Known as China’s “Ice City” (冰城 – bīng chéng), the capital of Heilongjiang province is a winter wonderland if there ever was one. With its epic annual Ice and Snow Festival going on at the moment, now is the perfect time to take a short trip there. Here’s a brief guide on what to do with 48 hours in Harbin. 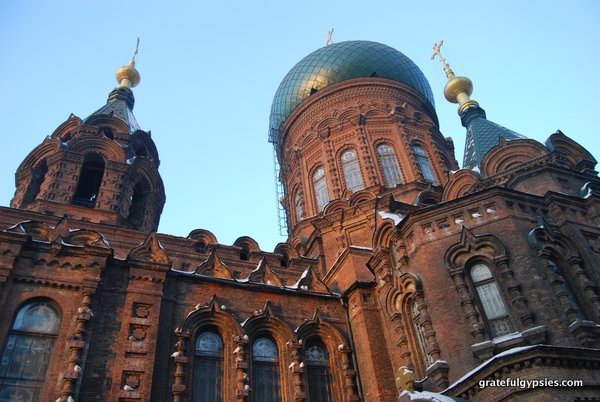 The Russian influence is strong in Harbin, and nowhere is this more evident than the stunning St. Sophia Cathedral (圣索菲亚教堂 – shèng suǒ fēi yà jiào táng). The first generation of Harbin Russians moved there in order to work on the railroad. In the 1920s, the city was flooded with over 100,000 Russian White émigrés. While there aren’t so many Russians living in Harbin today, the beautiful church remains. It is now home to the Municipal Architecture and Art Museum, which isn’t really worth checking out. Just snap a few photos of the church’s beautiful exterior and continue on your way.

Fun on the Frozen River 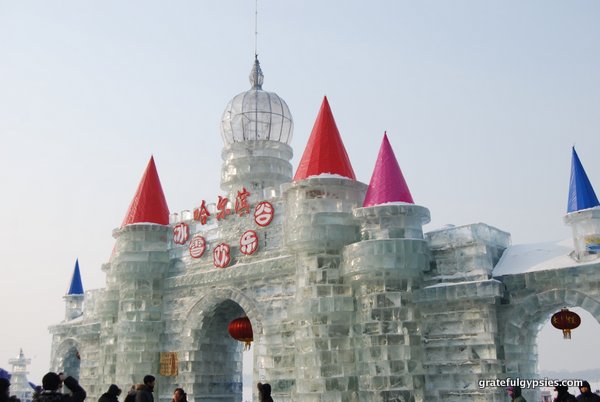 Harbin is located along the Songhua River (松花江 – sōng huā jiāng), which freezes over in winter. Take a walk over there to check out the Ice and Snow Happy Valley (冰雪欢乐谷 – bīng xuě huān lè gǔ) for lots of fun on the frozen river. It’s a little winter amusement park, with fun activities for the whole family. 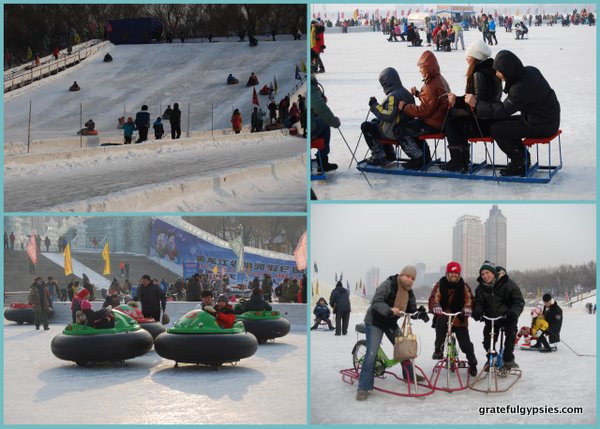 Just a few of the things you can do.

You’ve got all kinds of options down here – rent an on-ice bicycle, crash into each other in little bumper boats, speed down the hill in an inner tube, or just push yourself around on a silly ski-chair. We also saw people riding horses and little dune-buggy vehicles. Just make sure you bundle up, as it’s freezing cold here! 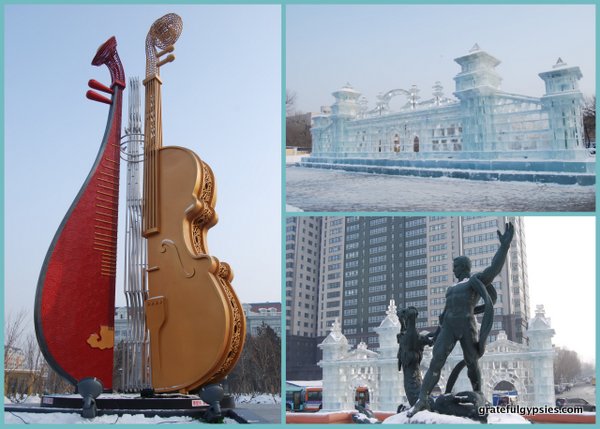 Next up, walk through Stalin Park (斯大林公园 – sī dà lín gōng yuán) – yes, that Stalin. You’ll see plenty of interesting sculptures, people engaged in intense games of ping-pong, and one of the ubiquitous free exercise parks that seem to be around every corner in China. Strike up a conversation with locals and practice your Chinese. Many people say that Harbin is one of the best places to study and speak standard Mandarin. 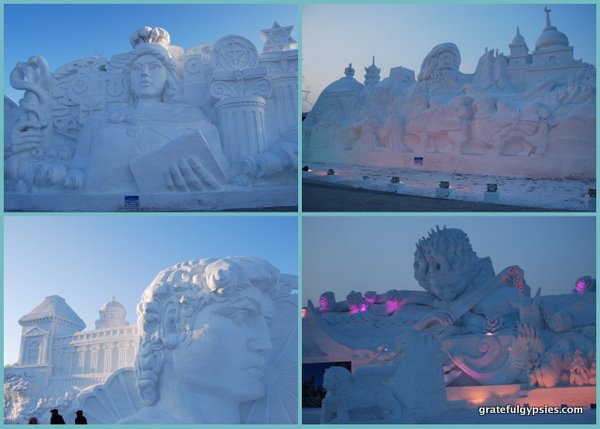 A few of the many amazing sculptures.

Just across the river, you’ll find the Sun Island Park (太阳岛公园 – tài yáng dǎo gōng yuán). You can take a cable car here, catch a bus or a cab, or just walk. This park hosts the annual Snow Expo (雪博会 – xuě bó huì), which brings artists from all over the world in to craft stunning snow sculptures. 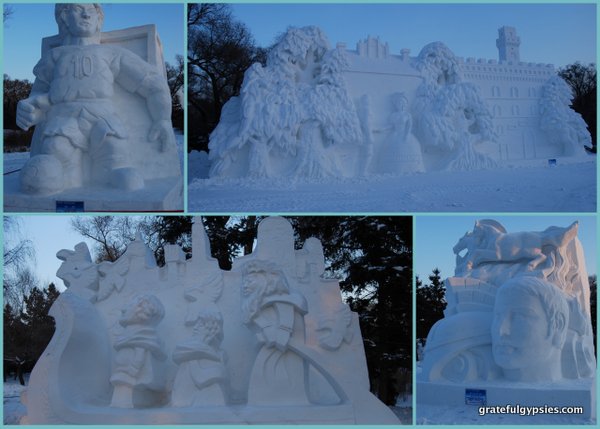 The park is open from 8:30 AM to 7 PM and entrance costs 240 RMB/person. Unlike the bigger Ice and Snow World, this one is better seen during the day. There’s usually a theme for each year, such as Ancient Greece or Chinese Legends. 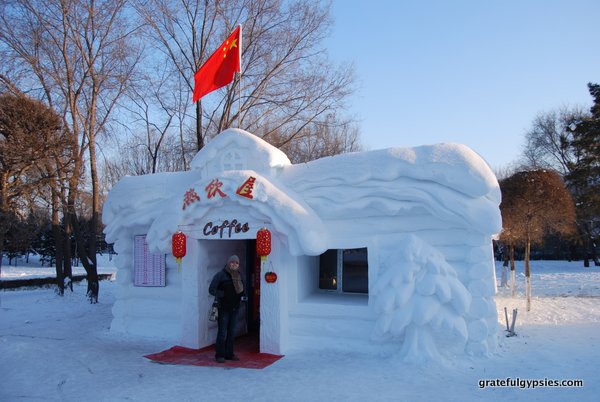 Warm up in one of these huts.

Be sure to wear lots of layers, as the bitter cold of Harbin’s winter is no joke. Take good care of your electronics, too – my camera just about froze over and the battery died after about half an hour. If you need to warm up, there are a few little huts selling things like instant noodles and coffee. 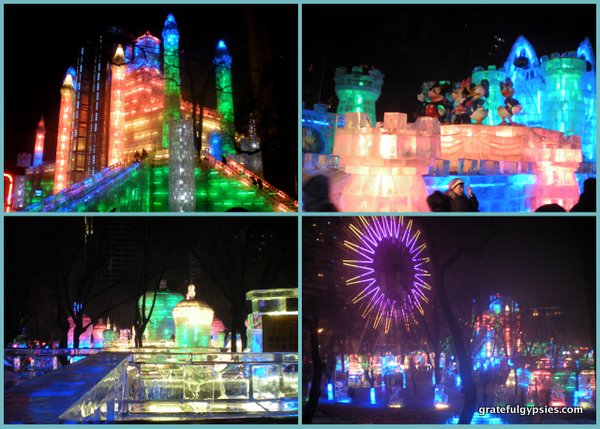 Fun for big kids, too!

After getting dinner, you might as well check out Zhaolin Park (兆麟公园 – zhào lín gōng yuán). This is the smallest, cheapest, and easiest festival venue to visit from downtown. The sculptures here aren’t quite as impressive as those at the Ice and Snow World, but it’s a good warm-up. Plus, it’s very family-friendly, usually with an area full of Disney characters. The park is open until 9 PM and the cost is 150/person and free for children under 1.2 meters.

That’s enough excitement for day one. Be sure to rest up, because there’s a lot to do on your second day in Harbin. Get ready for a visit to the tiger park, the massive neon-lit ice castles, and a stroll along the Central Avenue to take in a bit of the city’s nightlife.