For those of you who are just joining this ongoing series, so far we’ve covered two municipalities (Beijing and Shanghai) and one province (Sichuan). Today, we’re going to make a big leap from the land of pandas and hot pot in southwest China to the complete opposite corner of the country as we explore Heilongjiang (黑龙江 – hēi lóng jiāng – lit. “black dragon river”) province. This interesting name actually comes from the Chinese name for the Amur River, which forms the border between China and Russia. As Heilongjiang is known for its bitter cold winters and Russian influence, you might want to bundle up and pour a glass of vodka before reading further…

An introductory video from CCTV about Heilongjiang.

The area currently known as Heilongjiang has a long history going back thousands of years. Even before the Qin Dynasty (221-206 BC), various ethnic groups inhabited the land. Beginning in 698, much of the land was part of a Korean empire called Bohai (渤海 – bó hǎi). In 907, a nomadic group known as the Khitan (契丹 – qì dān) established the Liao Dynasty (辽朝 – liáo cháo) here, and they soon overtook Bohai. It wouldn’t last long, though, as the Jin Dynasty (金朝 – jīn cháo) came to power in 1125. The Jin would go on to rule much of north China, and it all began in modern day Heilongjiang.

Fast forward a few hundred years, and the Manchu Qing Dynasty is in power. At this time, Heilongjiang was split between east and west, and it was also closed to Han Chinese migration. In 1858 and 1860, the government gave up part of Heilongjiang to Russia, creating its present northern border. Around this time, the doors were opened to Han people, and they soon became the majority. This mass migration was known as “crashing into guandong” (闯关东 – chuǎng guān dōng), with “guan dong” being the old name for Manchuria.

In 1931, the area came under Japanese control, and it remained so until 1945 when the Japanese were defeated by the Soviet Army. At this time, five provinces were converted into two – Heilongjiang and Songjiang. Eventually, these two would be merged into one, with Harbin designated as the capital. During the Chinese Civil War, Heilongjiang was the first province to come under complete control of the Communists, with Harbin as their first major city. 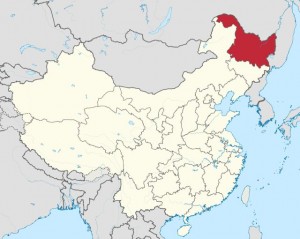 Heilongjiang on the map.

Located in the region of Chia simply referred to as “Northeast” (东北 – dōng běi), Heilongjiang is in fact as far northeast as you can get without leaving China. To both the north and the east, you’ll find Russia; to the south, you’ll find Jilin province, and to the west you’ll find Inner Mongolia. The province itself covers an area of 460,000 square km, and it is split up into 13 prefecture-level divisions. There are several big cities throughout the province, including the capital of Harbin (哈尔滨 – hā ěr bīn). In terms of the landscape, Heilongjiang is dominated by mountains and rivers, and it also features a lot of forests. 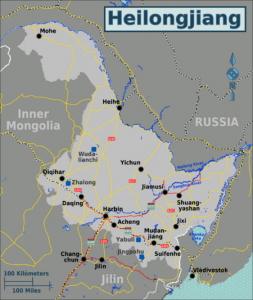 A closer look at the province itself.

Although Heilongjiang is thought by many to be a frozen abyss year round, most of the province actually experiences all four seasons. Most of it is considered a humid continental climate, while the areas in the far north are labeled subarctic. Summers are short and comfortably warm, whereas the winters are long, dry, and painfully cold. If you can stand the cold and are a fan of snow and ice, winter is a perfect time to visit Heilongjiang. More on that to come… 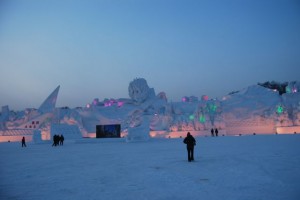 As of the most recent census in 2010, the population of Heilongjiang exceeds 38 million. As with most other places in China, Han Chinese dominate in the demographic category, making up over 95% of the population. In terms of ethic minorities, Manchus (满族 –  mǎn zú) come in first with around 3%, followed by Koreans and Mongols. Although Heilongjiang is known for its Russian influence, there actually aren’t that many Ruskies currently living there. 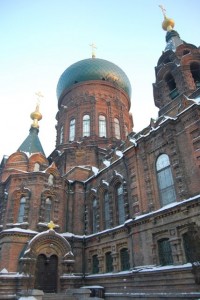 Heilongjiang, Jilin, and Liaoning make up the northeast region of China, and the culture throughout these provinces is fairly similar. People speak pretty standard Mandarin, so it’s a good place to study the language or put it to good use. In the capital of Harbin, you’ll find plenty of Russian influences in both the food and architecture of the city. Due to the incredibly cold winters, the people of Heilongjiang are thought to be quite resilient and tough. Another aspect of the culture related to the bitter weather is the widespread use of pickled vegetables (酸菜 – suān cài) in the cooking. It should come as no surprise that two of the biggest cultural activities of Heilongjiang are skiing and ice and snow sculpting. 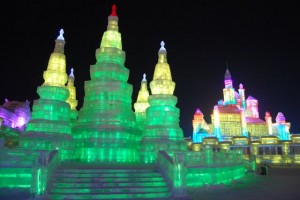 Perhaps the most popular place for people to visit is Harbin in the winter. During this time, you can enjoy the Ice and Snow Festival (冰雪节 – bīng xuě  jié), which lasts from around Christmastime until the snow melts. People come from all over the world to build elaborate sculptures from snow and ice. At night, the gigantic ice castles are illuminated in a sea of neon lights, creating a stunningly beautiful scene. Just make sure you wear a few extra pairs of socks, because temperatures drop well below zero. In Harbin, you’ll also find the Tiger Park (老虎公园 – lǎo hǔ gōng yuán), where you can feed a live cow to the hungry kitties for the sum of 2,500 RMB. If that’s not your thing, then you can catch a train out of the city to Yabuli (亚布力 – yà bù lì), the largest ski resort in China. 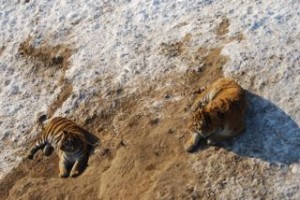 A video I made about a trip to Harbin last year.
There’s more to Heilongjiang than just ice and snow, though, so it’s definitely worth visiting in the warmer months as well. Winter or summer, this corner of China is a fascinating place with a long history, a rich culture, and plenty to see.