In Part One of our new series, we explored China’s capital city – Beijing. Today, we’re heading a little bit south to take a closer look at Beijing’s biggest rival – Shanghai (上海 – shàng hǎi). The biggest city proper in the entire world, Shanghai is a bustling metropolis full of history, culture, and exciting new opportunities. Nicknamed the “Pearl of the Orient,” Shanghai is without a doubt one of the most famous cities on Earth.

A short video I compiled about my trip to Shanghai last October. 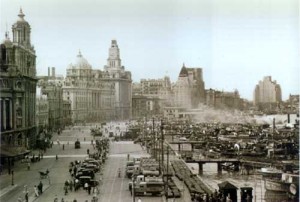 A view of Old Shanghai.

As such a big and influential city today, it’s hard to imagine that Shanghai only actually became a city in 1927. In fact, up until 1074 during the Song Dynasty (960-1279) it was only just a village; in that year, it was upgraded to a market town. Later on during the Ming Dynasty (1368-1644), a city wall was built in Shanghai to protect against Japanese raids. Then, thanks to a few important decisions during the Qing Dynasty (1644-1912), it became a major trade port in the Yangtze region. After China’s defeat in the First Opium War (第一次鸦片战争 – dì yī cì yā piàn zhàn zhēng) in 1842, eight nations were granted concessions in Shanghai. In these foreign controlled areas, Chinese law did not apply. Strolling around Shanghai today, you’ll still see plenty of European and American style architecture that dates back to this time. During the 1920s and 1930s, Shanghai experienced a boom, as trading and banking firms set up shop along the Bund. During this time, many Russians and European Jews fled to Shanghai, creating a massive population of foreigners. Then, during World War II, the Japanese bombed and occupied Shanghai, resulting in most foreigners fleeing. In 1949, with the Communists in control and the PRC having been established, many people from the business and entertainment world fled Shanghai in favor of Hong Kong and Taiwan; perhaps that’s they are both still the main source of music and film stars in China. After a few decades of hardships, Deng Xiaoping’s Open Door Policy (门户开放政策 – mén hù kāi fàng zhèng cè) of 1976 started what has been an incredible revival in Shanghai, which continues to this day as the city pushes forward as an economic and financial center. 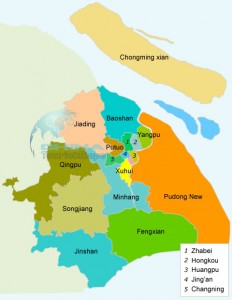 A map of Shanghai's many districts.

Shanghai is located in the Yangtze River Delta (长江三角洲 – cháng jiāng sān jiǎo zhōu), and it borders Jiangsu province to the north and west, Zhejiang province to the south, and the East China Sea (东海 – dōng hǎi) to the east. The city is basically split by the Huangpu River (黄浦江 – huáng pǔ jiāng) – on the western side lies the historic city center of Puxi (浦西 – pǔ xi), and on the eastern side lies the newly developed area known as Pudong (浦东 – pǔ dōng). Most of the metropolis is flat, so you won’t find many hills or mountains here. You will, however, find plenty of water – streams, canals, rivers, and lakes. As far as the division of the municipality goes, it’s composed of 16 districts and one county.

The climate of Shanghai is classified as humid subtropical, and the city experiences four distinct seasons. Although it doesn’t snow much in the winter, the wind chill factor can be quite brutal. Spring is nice temperature wise, but often cloudy and rainy. Summer is quite hot and humid, and freak thunderstorms coupled with the risk of typhoons make for rather unpredictable weather. The best season is fall, when it’s cool, sunny, and dry. 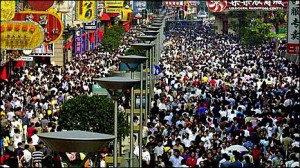 Don't be surprised when you see crowds like this.

As I mentioned earlier, Shanghai is the most populous city proper in the entire world. This figure takes into account only the urban area, which in Shanghai includes nearly 18 million people; add in the surrounding areas and you’ve got a population of over 23 million. From the 2000 to 2010 census counts, the city’s population rose by about 38%. Nearly 99% of the residents of Shanghai are Han Chinese, but the minority population is growing at an alarming rate. As far as foreigners go, the three largest groups are: Japanese (31,000+), American (21,000+), and Korean (20,000+). 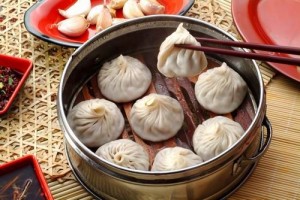 As with many other places in China, the language is a big part of the culture in Shanghai. If you should find yourself traveling here and feeling bummed because you can’t quite understand the people next to you on the subway, even though you’ve studied Mandarin extensively, don’t be worried – people speak Shanghainese (上海话 – shàng hǎi huà), which sounds absolutely nothing like standard Mandarin. Most people can speak Mandarin just fine, though, and quite a few people also speak English. There are plenty of museums, gardens, and temples to explore in the city, which also help give you a feel for the local culture. Of course, in a place that has had so much outside influence, you really feel the east meets west vibe come out in Shanghai. When it comes to food, Shanghai cuisine is known to be sweet and oily. Some of the most famous dishes include hairy crab (毛蟹 – máo xiè) and steamed dumplings (小笼包 – xiǎo lóng bāo). The Shanghai xiaolongbao are quite different from the dumplings up north, as they are full of steaming hot soup. The way to eat them is to take a small bite, suck out the soup, and then dip the dumpling in vinegar, soy sauce, chili, or all three. 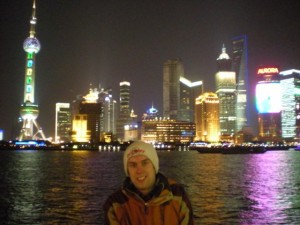 Yours truly enjoying the Bund on a winter evening. 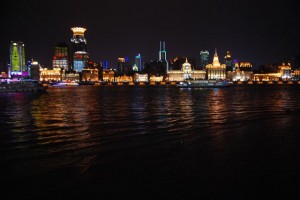 A view of the other side.

Of course, no visit to Shanghai is complete without the obligatory trip to the Bund (外滩 – wài tān), a waterfront area along the western bank of the river. Here you can enjoy the view of the river and Pudong on the other side, as well as the incredible architecture – 52 buildings of various architectural styles are located here. If the classical architecture isn’t your thing, you can always head to the other side of the river on a boat and check out the modern buildings. From the Oriental Pearl TV Tower, to the Jinmao Tower, to the Shanghai World Financial Center, there are some massive and visually stunning buildings to see. If you’re looking to relax and get away from the skyscrapers, a good stop is the Yuyuan Garden (豫园 – yù yuán) in the Old City. Alternatively, you can get out of the city entirely and visit one of the many water towns nearby, such as the Zhujiajiao water town (朱家角镇 – zhū jiā jiǎo zhèn). Here, you can float through the town’s various canals on a hired boat and enjoy the views of this peaceful village. 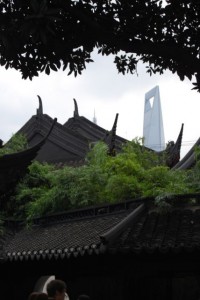 Well now we’ve covered two of China’s most famous places and two of the four municipalities. Next time, we’ll jump into one of the many provinces as we continue our journey around the Middle Kingdom.