Better Know a… Municipality (Tianjin) Posted by sasha on Mar 30, 2017 in Culture

China is a massive country composed of provinces, autonomous regions, Special Administrative Regions, and municipalities. If that sounds confusing, that’s because it is. We’ve been working our way around the country one area at a time here, introducing each and every single one. There are four municipalities in China, and we’ve already covered the two biggest ones – Beijing and Shanghai. Next up, we head a little south of the capital to Tianjin (天津 – tiān jīn). 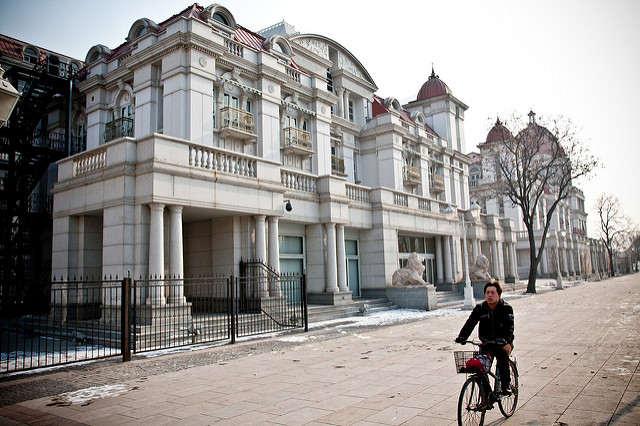 Image by Alex Keene from flickr.com.

In ancient times, the area that is now Tianjin was open sea. The land was created by the sedimentation of rivers entering the sea at the Bohai Gulf. During the Sui Dynasty, the opening of the Grand Canal (大运河 – dà yùn hé) turned the area into a center of trade. It was known as Zhigu (直沽 – zhí gū) – “Straight Port” – until it was renamed Tianjin in 1404 by the Yongle Emperor. The name means “Heavenly Ford,” to indicate that it was he who forded the river. It was promoted to a prefecture in 1725 and Tianjin County was established a few years later in 1731.

During the Second Opium War, the British and French sent ships to Tianjin in response to the capture and imprisonment of men aboard a ship called The Arrow. They prevailed, which led to the signing of the Treaty of Tianjin (天津条约 – tiān jīn tiáo yuē) in 1858. This very unequal treaty opened Chinese ports, including Tianjin, to foreign trade. They each established concessions in the city, and would eventually be joined by several other countries.

During the Boxer Rebellion (义和团运动 – yì hé tuán yùn dòng), the rebels seized control of much of Tianjin. The Eight-Nation Alliance was able to recapture the city, and they established a provisional government. This governed the city for a few years until control was returned to the Qing Dynasty.

Tianjin grew rapidly thanks to industry, commerce, and finance and was established as a municipality in 1927. Ten years later, the city fell to Japan during the Second Sino-Japanese War. At first, the Japanese respected foreign concessions. This changed with the Tianjin Incident (天津事件 – tiān jīn shì jiàn) when they surrounded and blockaded the British concession due to their refusal to hand over six Chinese people who had assassinated a Japanese collaborator. The British eventually gave them up, and they were all executed. Japanese occupation lasted right up until the end of WWII after their surrender.

More recently, Tianjin was in the news for a huge explosion that rocked the city in 2015. A series of explosions hit a storage container station, killing 173 and wounding several hundred others. 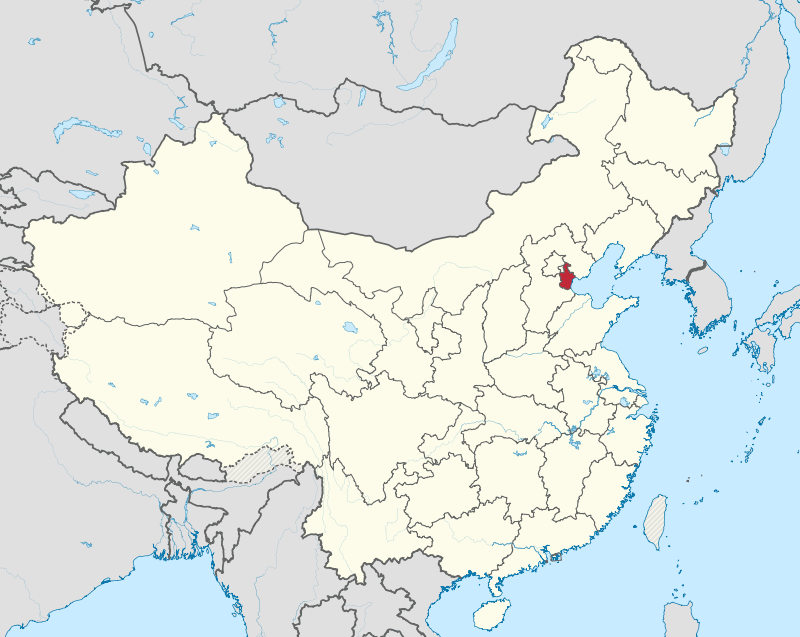 Tianjin on the map.

Tianjin is located in northern China on the west coast of the Bohai Gulf. It’s bordered by Beijing to the northwest and is surrounded by Hebei province. It’s at the northern end of the Grand Canal, which connects the Yellow and Yangtze Rivers. Tianjin is mostly flat, but it does get hilly in the north with the Yan Mountains (燕山 – yàn shān). The Hai River (海河- hǎi hé) is formed here by the confluence of five other rivers and it connects the city to Beijing. It’s divided into 16 county-level divisions, which are all districts.

Tianjin has four distinct seasons. Winters are cold, windy, and dry, while summers are hot and humid. Spring is also dry and windy, with the fun addition of sandstorms. Tianjin doesn’t get a lot of rain, with most of it coming in July and August. As with many massive metropolises in China, Tianjin is plagued by air pollution problems. 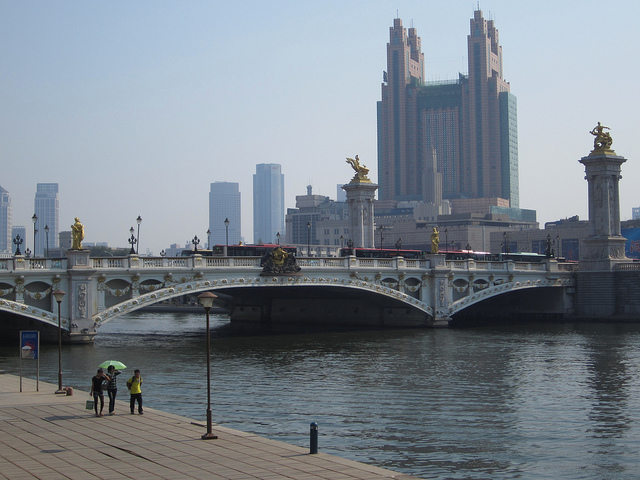 Image by Ken Marshall from flickr.com.

As of 2015, the population of Tianjin was estimated at just over 15 million. It has grown quite rapidly, with the population doubling since the mid ’80s. It’s the largest coastal city in the country, and its urban population is fourth behind Shanghai, Beijing, and Guangzhou. While Tianjin is around 97% Han, many of the country’s ethnic minority groups are represented here. The biggest is the Hui, of which there are over 170,000 calling the city home.

Check out this awesome time-lapse video of Tianjin. 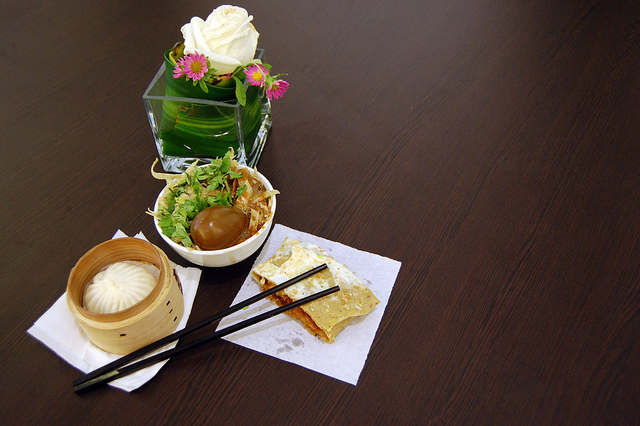 Image by Shubert Ciencia from flickr.com.

Thanks to its proximity to the capital, Tianjin is home to a thriving Beijing opera scene. Despite their geographical closeness, the Tianjin dialect of Mandarin is quite different from the one heard in Beijing. Tianjin is also famous for its comedy, especially the art of cross-talk (相声 – xiàng sheng). When it comes to cuisine, it should come as no surprise that seafood features heavily on menus here. The city is also home to a very famous brand of steamed stuffed buns, Goubuli (狗不理 – gǒu bù lǐ. Another famous local snack is a fried dough twist (麻花 – má huā).

While Tianjin is ofter overlooked and overshadowed thanks to its location so close to Beijing, there’s still plenty to see and do here. Take a stroll on the city’s Ancient Culture Street (古文化街 – gǔ wén huà jiē), which features a variety of shops and restaurants in the architectural style of the Qing Dynasty.

Take a walk on the Ancient Culture Street.

Another popular activity in Tianjin is visiting the city’s former concession areas. This part of the city is known as the Five Avenues (五大道 – wǔ dà dào), and here you can see a wide array of architectural styles from the many countries who had concessions here. 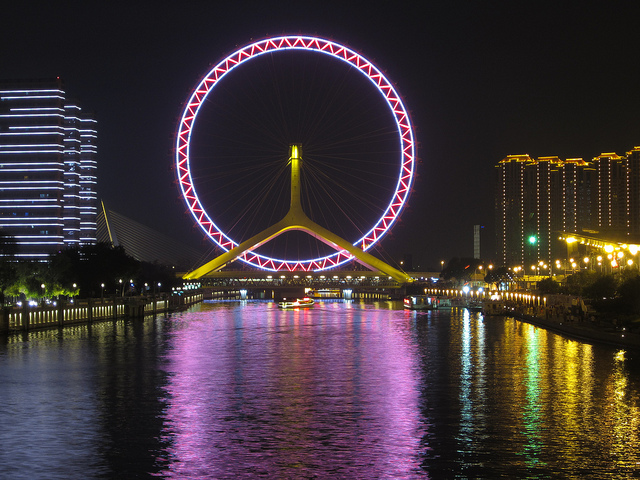 Image by Ken Marshall from flickr.com.

You can also take a spin on the massive Tianjin Eye (天津眼 – tiān jīn yǎn) ferris wheel overlooking the Hai River. Speaking of the river, why not take a river cruise while you’re here?

Although it’s not nearly as famous as the other, bigger municipalities in China, Tianjin has plenty to offer. Plus, it’s only a 30-minute ride on the high-speed train from Beijing. Come check it out for at least a day and explore this historical city.

你去过天津吗?
nǐ qù guò tiān jīn ma
Have you been to Tianjin?