Today is National Day (国庆节 – guó qìng jié) in China, commemorating the day Mao Zedong established the People’s Republic of China back in 1949. On this day, thousands upon thousands of patriotic Chinese gather in Tiananmen Square to celebrate this important holiday. Those who are very dedicated make it to the square at sunrise to take in the flag raising ceremony. And what better way to show off your true patriotism than singing along to the national anthem (国歌 – guó gē)? For a little lesson in Chinese language and culture, let’s take a closer look at the song. 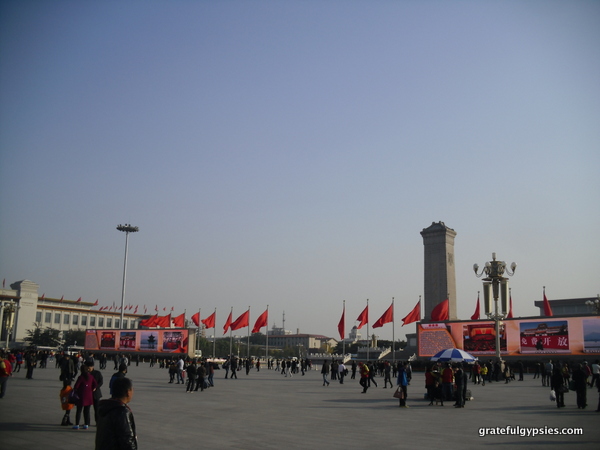 Tiananmen Square – the heart of China.

China’s national anthem is called “March of the Volunteers” (义勇军进行曲 – yì yǒng jūn jìn xíng qǔ). The lyrics were written by Tian Han (田汉), a poet and playwright. Originally, they were part of his poem called “The Great Wall” (万里长城 – wàn lǐ cháng chéng) and were intended for use in a play or film. Composer Nie Er (聂耳) set the words to music while in Japan, where he would die an untimely death while swimming at the age of just 23. In June of 1949, a committee was established to choose a national anthem for the soon-to-be-formed PRC. Out of nearly 700 entries, “The March of the Volunteers” was chosen. It became the provisional anthem just days before Mao established a new China, and it would eventually become the official anthem in 1982. Interestingly enough, there was a time in between when Tian Han’s words were forbidden to be sung, as he was imprisoned during the Cultural Revolution. At that time, “The East is Red” served as the country’s unofficial anthem. The song’s status as the anthem was even enshrined as an amendment to the constitution in 2004.

Although the lyrics have undergone some slight alterations throughout the years, they are now back to the original version. Here they are in Chinese, pinyin, and English:

Now that you’ve got the backstory and the lyrics, follow along with the video. You can even try to sing it in Chinese!

For a full-blown nationalist display, check out this video from a military parade capped off with an epic flag raising ceremony:

To all 1.4 billion people in China, we’d like to wish you a…