Chinese Public Holidays Posted by sasha on Dec 7, 2012 in Culture 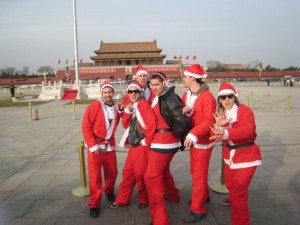 As an American living and working in China, now is the time of the year that I get the most homesick. On Thanksgiving, I miss Grandma’s cooking, the big family dinner, and of course, American football. While Christmas in Beijing isn’t so bad – thanks mostly in part to the drunken shenanigans of the annual Santa Con event – I’d still rather be at home spending the holidays with family. Although many Chinese people (especially my students) are very interested in learning more about traditional American holidays, the fact that they aren’t recognized as holidays in China simply means I end up working on those days. This is a reality us expats here in China must learn to accept. Thankfully, there are numerous Chinese holidays where we all get a break. Today, I’m going to introduce the various Chinese holidays and give a short background on each one:

Every year, China celebrates two long holidays, known as Golden Weeks (黄金周 – huáng jīn zhōu). By combining a 3-day public holiday with two weekends, many people enjoy a whole week off of work. Of course, these are the busiest travel times of the year, so good luck getting a train or bus ticket. Bus and train stations, airports, and roads are heavily congested, as migrant workers in the big cities make the trek back to their hometowns and more and more well-off Chinese people get out of dodge and head abroad. So, which holidays are worthy of Golden Week status?

The granddaddy of them all, the Spring Festival is far and away the most important holiday celebrated in China. Commonly referred to in the West as “Chinese New Year,” this traditional Chinese festival actually lasts for 15 days, although most people are back to work about halfway through it. It begins on the first day of the first lunar month (正月 – zhēng yuè), and ends with a bang (literally, thanks to thousands of fireworks) with the Lantern Festival (元宵节 – yuán xiāo jié) on the 15th day. Before all of the festivities begin, families get together for a big dinner on New Year’s Eve (除夕 – chú xì). This holiday always falls in either January or February, and in 2013 the New Year will begin on February 10th. For more on the history, traditions, and customs of this holiday, check out some past posts from the blog: “Superstitions and Traditions“, and “History of the Spring Festival.”

The second Golden Week comes in the fall to celebrate the founding of the PRC with National Day. On October 1, 1949, Mao Zedong stood in Tiananmen Square and proclaimed the birth of a new China. These days, you’ll still find Chairman Mao in the Square, as his preserved body rests (maybe not in peace) in a glass case in his own mausoleum; you’ll also find thousands of patriotic Chinese, waving their flags and posing for countless cell phone photos. One year, I headed down to Tiananmen to take in the nationalistic fervor, and I brought my video camera along. Check out the resulting YouTube video below:

While the Spring Festival and National Day holidays are by far the biggest and most important here, there are a few other public holidays where mostly everyone gets a few days off:

In Chinese, 元 can be translated as “the beginning” and 旦 as “day.” Therefore, this festival marks the first day of the year. This used to be celebrated according to the lunar calendar, but at some point in time it was moved to January 1st and the Spring Festival took over as the Chinese New Year celebration. While you won’t find throngs of Chinese people gathered in the streets wearing silly hats, waving noisemakers, drinking champagne, and singing “Auld Lang Syne,” Western style New Year’s Eve parties are becoming more and more popular here, and obviously everyone loves the extra day off of work!

This traditional Chinese festival has a history going back thousands of years, but it has only been an official public holiday since 2008. With the harsh and bitter winter gone, people head outside to enjoy the greenery of springtime. They also visit the graves of their ancestors to do a bit of spring cleaning and make offerings. Traditionally, people would burn paper money which is meant to be used in the afterlife. The times they are a changing, however, so don’t be surprised to see a few paper iPads and sports cars being burned as well. You know, because your great-great Chinese grandfather would totally love playing Fruit Ninja. For more on this festival, check out a post from this past year.

A short news clip on the Tomb Sweeping Day.

Often referred to in Chinese simply as “5/1” (五一 – wǔ yī), this holiday meant to celebrate workers was once a Golden Week. The powers that be in China decided to go a different route, though, as it was demoted to a one-day holiday in 2008. To make up for it, the Tomb Sweeping, Dragon Boat, and Mid-Autumn festivals were all added as additional days off. It’s still a big travel weekend, though, with many people taking quick getaways. Back in 2010, I had one of my most ridiculous China adventures ever over this long weekend. Read about it here and here.

This ancient holiday celebrates a famous Chinese poet named Qu Yuan (屈原) who committed suicide by jumping off a bridge into a river with rocks tied to his legs. Modern traditions include eating rice dumplings (粽子 – zòng zi) and racing dragon boats (龙舟 – lóng zhōu). To learn more, you might as well go back and read this post.

A video from Taiwan talking about the history and traditions.

Always falling on a full moon, this traditional holiday celebrates the fall harvest. That and the fact that Chinese families get together for a big dinner liken it to the North American Thanksgiving. There’s an interesting story behind this holiday involving a goddess living in the moon, so you should read about it in one of my old posts. These days, the most important custom is scarfing down a bunch of moon cakes (月饼 – yuè bǐng).

Improve your Chinese with this short animated video talking about Mid-Autumn Festival.

Well, there you have it – all of the major public holidays in China. With so many fascinating stories behind these festivals, so many great traditions, and a whole lot of great food, these Chinese holidays are a critical aspect of the culture. In my years as an English teacher here in the capital, one of my favorite experiences has without a doubt been teaching students about my country’s various holidays while at the same time learning about and taking part in all of theirs. Plus, it’s hard to complain when you just double the amount of holidays you get to celebrate each year by living in another part of the world!