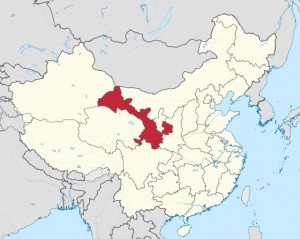 Gansu on the map.

We’re going around this massive country little by little here at Transparent Chinese in this series inspired by one of my heroes, Stephen Colbert. So far, we’ve covered the two most famous cities in China – which are actually municipalities – Beijing and Shanghai. We’ve also explored two provinces famed for their heat – Sichuan and its famously spicy food, and cold – Heilongjiang with its Ice and Snow Festival. Today, we’re cruising over to northwest China, where we’ll dive into Gansu province (甘肃省 – gān sù shěng). Part of the ancient Silk Road, this province has played an important role throughout China’s history.

A number of artifacts that have been excavated in Gansu show that Neolithic cultures lived here during prehistoric times, such as the Dadiwan culture (大地湾文化 – dà dì wān wén huà), which dates way back to 6,000 BC. In fact, a variety of ancient cultures flourished here. Fast forward many years, and the state of Qin (秦 – qín), which went on to unify much of China under the Qin Dynasty and begin imperial China, began in Gansu. This province was critical for successive Chinese dynasties, especially because of the Hexi corridor (河西走廊 – hé xī zǒu láng). Along this route, the Han Dynasty extended the Great Wall and also built up other strategic forts.

During the Tang Dynasty, a treaty was signed with the Tibetan Empire in 823, causing China to lose control of Gansu. From 848 to 1036, an Uyghur state was established in Gansu, resulting in a majority of the population converting to Islam. Many centuries later, Gansu would be a crucial part in the Dungan revolt, which began in 1862. The “Dungans” are now referred to as Hui people (回族 – huí zú) – a Chinese muslim ethnic minority group. This spread throughout much of China and resulted in the deaths of millions of Chinese muslims. 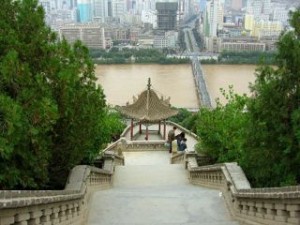 The Yellow River in Lanzhou.

Thanks to its funny shape and the fact that it stretches from the northwest to central China, Gansu actually includes the geographical center of the country. Neighboring provinces include Xinjiang and Qinghai to the west, Inner Mongolia and Ningxia to the north, Shaanxi to the east, and Sichuan to the south. A small portion actually borders Mongolia as well. The southern part of the province is rather mountainous, while the north is primarily flat. In Gansu, you’ll find the Yellow River (黄河 – huáng hé), and you’ll also find plenty of deserts (including part of the Gobi) and mountains. The provincial capital is Lanzhou (兰州 – lán zhōu), a city of over 3 million people.

In general, the summers are hot and the winters are cold in Gansu. The province has a continental climate with land that is semi-arid or arid. January is the coldest month of the year, with temperatures dropping well below zero; July is the hottest, with temperatures between 22

C. Gansu also sees plenty of rain, with most of it coming in the summer months.

Nearly 31 million people call Gansu home, with a solid majority of the population living in rural areas. Not surprisingly, Han Chinese dominate here, making up over 90% of the population. That being said, there are plenty of ethnic minorities living here as well, including: Kazak, Mongolian, Tibetan, Hui, Dongxiang, Tu and Manchu. These days, you’ll find plenty of Hui people from Gansu living all around China running restaurants. In almost every city I’ve traveled to in China, I’ve come across the familiar restaurant sign for “Lanzhou Beef Noodles” (兰州牛肉拉面 – lán zhōu niú ròu lā miàn). Inside, waiters in white caps whip up delicious dishes free of pork. In fact, one of my favorite restaurants in Beijing is a Lanzhou place. 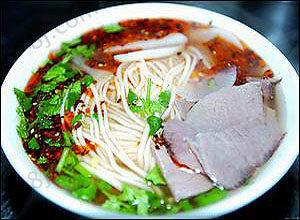 A hot bowl of Lanzhou noodles.

As you may have guessed, the food of Gansu is an important part of the culture. Indeed, most people from other areas of China will associate the province first and foremost with its delicious pulled noodles. Its Muslim (清真 – qīng zhēn) restaurants, which are a staple all throughout the country, serve up tasty dishes of beef and lamb. Despite the previously discussed Dungan revolt, there’s still a heavy Muslim presence here, and it’s reflected in the culture. Gansu is also full of Tibetan Buddhism and Buddhist art, which brings us to some of the provinces most famous places.

The Mogao Grottoes (莫高窟 – Mò gāo kū) contain a variety of Buddhist art spanning over 1,000 years. Along with the Longmen and Yungang Grottoes, these are the most famous ancient Buddhist sculptural sites of China. While there were originally over a thousand grottoes, 492 remain today.

A video from UNESCO about the Mogao Grottoes.

Another place of interest is Dunhuang (敦煌 – dūn huáng), a city that once was an important spot on the Silk Road. A few kilometers south of the city, you’ll find the incredible Crescent Lake (月牙泉 – yuè yá quán). An oasis in the middle of the desert, this crescent-shaped lake certainly seems like a mirage to tourists who come in on camel to marvel at its natural beauty.

Built in the Ming Dynasty, the Jiayuguan (嘉峪关 – jiā yù guān) section of the Great Wall is the first pass at the west end of China’s most famous landmark. As the most intact ancient military building, it’s often referred to as the “First and Greatest Pass Under Heaven” (天下第一雄关 – tiān xià dì yī xióng guān). 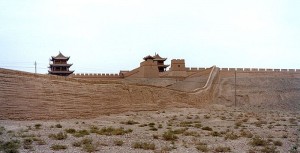 The western end of the Great Wall.

With a long history, varied landscapes, fascinating culture, and countless places of interest, Gansu is definitely a place worth visiting. Plus, if you can’t make it there in person, you can at least drop by a Lanzhou Beef Noodle restaurant just about anywhere in China and practice some Chinese with the workers there and ask them what it’s like! Stay tuned to the blog as we continue our journey around every single province, municipality, autonomous region, and special administrative region in China. It may be confusing, but it sure is fun!