Before coming to China on the day of my 23rd birthday, I had lived my entire life in the US. I had traveled to a few other countries in my youth – Italy, Greece, and Canada with my cello group, Mexico with a friend, and both the Netherlands and Jamaica to attend music festivals – however, I had never lived abroad. The decision to move to China and work as an English teacher was kind of random, to be honest. I wasn’t having any luck finding jobs in the states, I didn’t want to get stuck moving back to my hometown, and I wanted to try something different. Plus, Beijing had the 2008 Summer Olympics (夏季奥运会 – xià jì ào yùn huì) coming up, and I had a friend living there already; it seemed like an easy choice. Of course, making such a big move brought along with it quite a bit of culture shock (文化冲击 – wén huà chōng jí). Although by now I’ve grown accustomed to life here, there are still a myriad of things that I just don’t (and probably never will) understand. As an English teacher here, some of my most entertaining and enlightening conversations with students are about culture shock. They are always so interested to hear about my experiences as a foreigner living in China and what things I am/am not used to about life here. On the flip side, I also enjoy hearing stories from my students about their thoughts on my country and the Western world in general. It is the bridging of our cultural gaps that has been the most rewarding part of my time working here, both as a teacher and as a writer/videographer for this site. To give you all a better idea of what my experience has been like living here, I’m going to share some of my China culture shock experiences. In this first addition, we’ll look at something about China that always gives people culture shock… 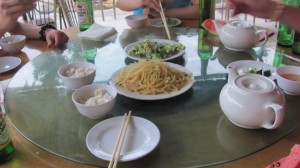 Prior to coming to China, I thought of Chinese food as General Tso’s chicken, egg rolls, crab rangoons, and fortune cookies. After arriving here, I quickly found out that not a single one of those things is served in China. In my first few weeks here, the group I was working with went out to dozens of group dinners. We were introduced to the Chinese way of dining out, and there was quite a bit of culture shock involved. For one, the community style of dining was new to me. Sure, I did that at family dinners growing up, but never really out in restaurants. In America, I was used to maybe sharing an appetizer with someone and then everyone ordering their own main course. In China, many dishes are ordered and placed on a lazy Susan. The table is spun around and you grab what you like. And we’re not just talking a starter, a main, and dessert here; a Chinese dinner is a marathon of food. Usually it starts out with some cold dishes (凉菜 – liáng cài), and then moves into a wide variety of main courses. Of course, there are always some staple foods around – rice, dumplings, or noodles. Soup comes last in a Chinese dinner instead of first, and dessert usually consists of a massive fruit plate. 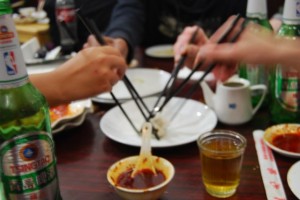 Using chopsticks (筷子 – kuài zi) was also new to me and took quite some time to get used to. It was always embarrassing at first when I couldn’t grab something tasty from the moving table and had to wait until the next time around. After years of practice, I can now confidently snatch a peanut as it’s flying by me on a lazy Susan – practice really does make perfect! In the first few months, I was laughed at so many times by Chinese people while they watched me struggle with my chopsticks. That probably explains why one of my favorite things to do while dining out in the many Western restaurants in town is watching young, trendy Chinese people struggle with their forks and knives. One time at a music festival, I even saw a Chinese guy eating his pizza and French fries with chopsticks. 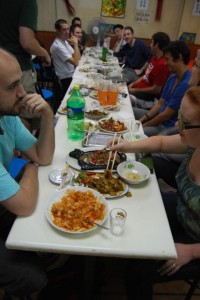 Dinner is always an occasion in China.

Dining out is also a very social experience in China, and by that I mean it’s hella noisy. Back at home, I was taught to politely and quietly eat in a restaurant, and say things like, “Excuse me, waiter. Could I have a glass of water?” I quickly realized that in China, however, you can just yell out, “Waiter! Bring a glass of water!”  (服务员！来一杯水！- fú wù yuán! lái yī bēi shuǐ!). Chinese restaurants are usually crowded, noisy, and smoky. There are “no smoking” signs posted everywhere in Beijing, but no one seems to pay them any mind. I was always taught that it was rude to noisily eat my food, but here in China slurping your noodles is a sign that you enjoy them. A dinner out in China is usually quite raucous, and more often than not it involves heavy drinking. The booze related culture shock will be discussed at a later date, as that is definitely its own beast. 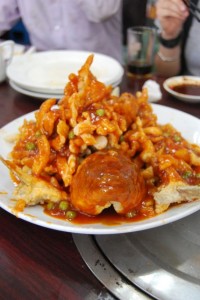 Fried fish heads may give you a little culture shock. 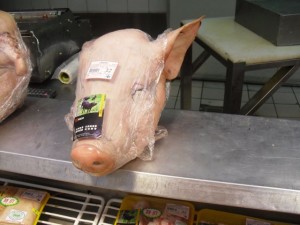 Yes, that is a pig's head for sale, to cook. Gross.

I had eaten chow mein (炒面 – chǎo miàn) before, as well as egg fried rice (蛋炒饭 – dàn chǎo fàn) and Kung Pao chicken (宫保鸡丁 – gōng bǎo jī dīng), but there were plenty of Chinese dishes that gave me a jolt of culture shock in my first few months here (and continue to do so). For example, Chinese people enjoy eating just about any part of an animal. Whereas Americans basically only eat chicken breasts, wings, and thighs, Chinese will also dig into the liver, heart, and especially the feet. There’s an old Chinese belief that eating an animal organ will benefit your corresponding organ – eating a heart is good for your heart, eating a brain will make you smart, and eating an animal’s penis will, well you get the idea. Think I’m joking? There’s an entire restaurant dedicated to serving up animal penis in Beijing, and it’s extremely popular and expensive. I remember at one lunch during my first month in China, I tried a dish called “thousand year old eggs” (皮蛋 – pí dàn – lit. “leather skin egg”). The eggs were black and very gelatinous, and they looked disgusting, to be honest.  I didn’t want to be rude and turn down one of the dishes, and I wanted to immerse myself in the local culture, so I went ahead and tried one. It took everything to keep that egg down and not send it flying back onto the table. On another afternoon out, I decided to sample a stick of fried silk worm larvae – not a good decision. That time, I wasn’t able to keep it down. Thankfully I had a cold Tsingtao beer to help me forget the hot mess I had just attempted to eat.

Watch the silkworm disaster and other strange snacks in this video I made back in 2010. 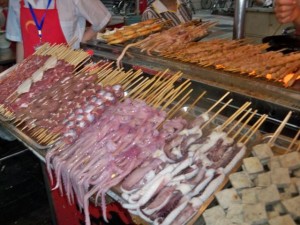 One of the greatest things ever made - 串.

Despite all of this food related culture shock, I can honestly say that one of the best things about living here is the food and dining out. Chinese cuisine is so complex and varied that you could spend an entire lifetime here and not sample it all. As a child, I was an incredibly picky eater; I even went so far as to pull the cheese off of my pizza. Living in China has opened my eyes and peaked my culinary interest. I’ve tried more new things here in 4 years than I had in the previous 23, and things I once hated are now huge parts of my diet, most notably spicy food and seafood. Going out to eat in Chinese restaurants back home usually meant my roommates and I were just super hungover and wanted to gorge on a Chinese buffet, but eating out in real Chinese restaurants in China is always an exciting experience. People often ask me what food I miss the most from back home. To be honest, now when I go home to visit I actually end up missing Chinese food more. Leaving the bar at 2 AM with friends back in the US, I long for the spicy, meaty goodness of a big piece of 串 (chuàn), a stick of grilled meat. Sometimes, culture shock is a good thing!

Keep an eye on the blog in the weeks to come for more culture shock stories about drinking habits, transportation, communication, and much, much more!