Eastern Chinese Cuisine Posted by sasha on May 8, 2019 in Culture

We’ve been all over China in the last few months, sampling some of the many delicious flavors that are unique to Chinese cuisine. From the imperial bird that is Beijing roast duck, (北京烤鸭 – běi jīng kǎo yā), to the numbing sensation induced by the Sichuan peppercorns (四川胡椒 – sì chuān hú jiāo), to the world famous Cantonese snacks known as dim sum (点心 – diǎn xīn), we’ve already covered north, west, and south Chinese cuisine. Of course, that means we still must head east! In this post, we’ll take a closer look at Eastern Chinese cuisine.

In the east of China, we’ll find some of the country’s best cuisine in the provinces of Anhui, Fujian, Jiangsu, and Zhejiang, as well as the bustling metropolis that is Shanghai. Although the food from this region may not be as famous as the cuisine from other parts of the country, four of them make the cut in the Eight Great Culinary Traditions of China (中国的八大菜系 – zhōng guó de bā dà cài xì), so they must be doing something right! In case you were wondering which styles make up the list of eight, here they are:

One famous quote about Chinese cuisine, which gives you a basic look at the different styles, goes, “South is sweet, North is salty, East is spicy, and West is sour” (南甜, 北咸, 东辣, 西酸 – nán tián, běi xián, dōng là, xī suān). It’s a bit more complex than that, but it’s a fun little line to remember. Now let’s find out what’s cooking over in the east as we check out some common dishes in Eastern Chinese cuisine. 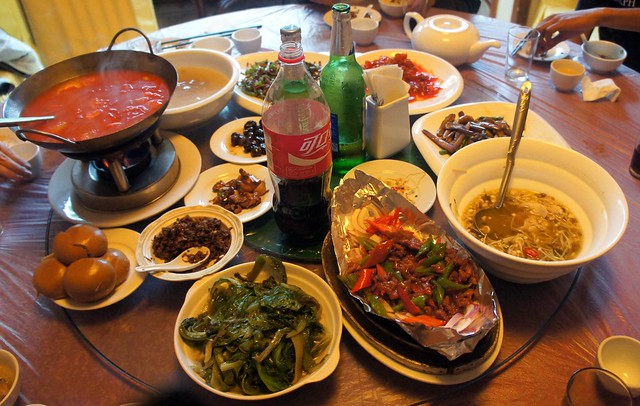 The style of Anhui cuisine comes from the Yellow Mountain (黄山 – huáng shān) region, and it’s known for its use of wild herbs and spices, as well as simple preparation methods. Chefs in Anhui pay close attention to the temperature of dishes. As such, unlike most other areas of China, frying and stir-frying are not very common cooking techniques here; rather, stewing and braising are more popular. Some common ingredients that are found in the mountainous region include bamboo shoots and a type of mushroom known as xiang gu (香菇 – xiāng gū). Here are a few of Anhui’s finest dishes:

Li Hongzhang was a top official during the late Qing Dynasty. As the story goes, Li was on a trip to the US once and was hosting a banquet for American friends. The chefs, however, were worried that they would run out of food. Li insisted that they dump the remaining ingredients in the kitchen into the pot to make a giant stew, and they obliged. Of course, many different ingredients can be used, but a few common ones include: squid, bamboo, bean curd, sea cucumber, ham, and assorted vegetables.

This type of frog can be found in caves near the Yellow Mountain, and it is rich in both protein and calcium. Apparently, “it has medical effects of nourishing Yin and treating lung deficiency.”

We all know about the Beijing roast duck, but that wasn’t the only imperial bird landing on dinner plates of emperors. This one dates way back to the Tang Dynasty, is light in color, and is both fragrant and salty. 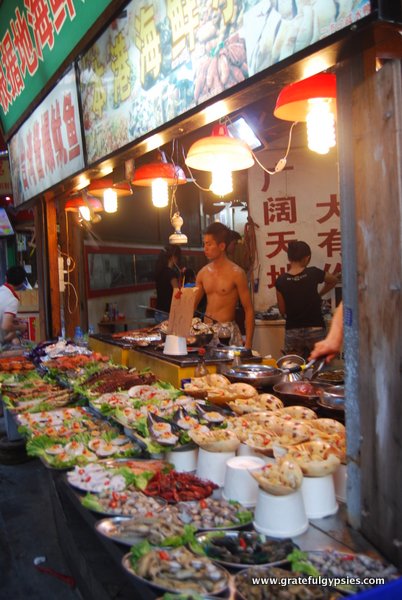 Also known simply as Min Cuisine (闽菜 – mǐn cài), this style of Chinese cuisine is known for its seafood, soups, stews, and visual presentation of its dishes. The food is known to be flavorful, light, and tender, with emphasis on the umami taste (鲜味 – xiān wèi). Braising, stewing, steaming, and boiling are all common cooking techniques in this region. The use of broths and soups is very important as well, and there’s even a saying that goes, “it’s unacceptable for a meal not to have soup” (不湯不行 – bù tāng bù xíng). Here are a few dishes you’ll find in this area:

This complex dish contains over 30 ingredients, including: sharks’s fin, abalone, dried scallops, mushrooms, and pigeon eggs. According to legend, a monk once breathed in the fantastic aroma of this dish and at once forgot his vegetarian vows; thus, he leaped over the wall to get a taste, and the fancy name for this dish was born.

As is common with a lot of Fujian dishes, wine lees that results from the production of rice wine is used to cook this one. This province is famous for its “drunken” dishes that are cooked with the actual rice wine or the wine lees. This brings us to…

These ribs are hammered, and absolutely delicious. For best results, marinade the ribs in a mixture or wine, garlic, salt, lemon juice, and chili for at least a day.

The cuisine in this region is known to be soft, but not to the point of being mushy. Ingredients are selected according to the season, and great attention is paid to matching the color and flavor of each dish. As with other regions, the cuisine here can be broken up into several sub-categories, the most notable of which is Huaiyang cuisine (淮扬菜 – huái yáng cài). It’s actually considered one of the Four Great Culinary Traditions (四大菜系 – sì dà cài xì), along with Cantonese, Sichuan, and Shandong cuisine.

As far as cooking techniques go, stewing, braising, roasting, and simmering are all popular. The dishes are typically light, fresh, and sweet. Here are a few that you might encounter:

This is one of my personal favorite Chinese dishes, although it threw me off a bit the first time I saw it. As legend has is, Emperor Qianlong was in a restaurant when he saw a tasty looking fish on an altar. He ordered it be cooked for him at once, but as the fish was meant for a sacrifice to the Gods and ancestors, the restaurant owner was unsure of what to do. 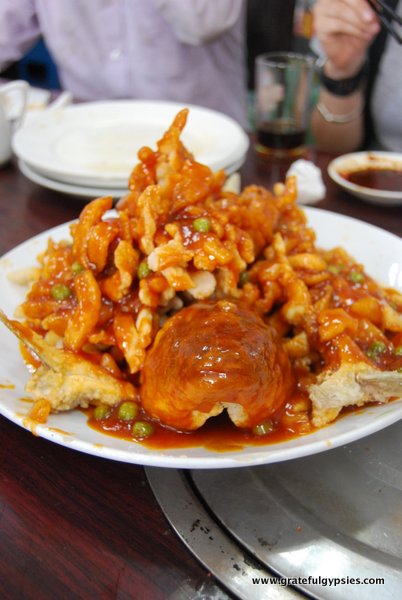 He decided to cook the fish in the shape of a squirrel instead, so he could feed the hungry Emperor and not upset the Gods. This dish has been popular ever since, and can be found all over China.

Much better than your standard and plain bowl of white rice, this dish incorporates tofu, ham, peas, and other ingredients to make it a perfect side dish for your meal. A good recipe can be found here.

One of the best Chinglish names out there for any dish, this one is actually made of pork meatballs and not lion’s heads. The meatballs are stewed with vegetables, and can be cooked in either a white (plain) or red (with soy sauce) style.

Food from this area is known to have a fresh and soft flavor. There are three main styles of Zhejiang cuisine, each deriving from a different city in the province: Hangzhou, Ningbo, and Shaoxing. The Hangzhou style makes liberal use of bamboo shoots, the Ningo style is known to be salty, and the Shaoxing style specializes in poultry and freshwater fish. Some famous dishes from this region follow: 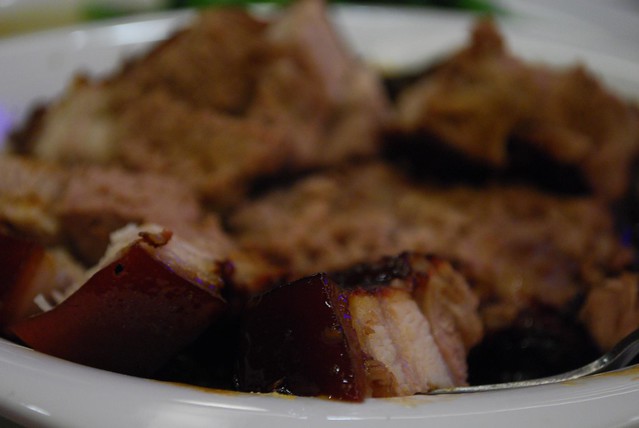 This Hangzhou dish is famous all throughout China, and it consists of fried pork belly stewed in soy sauce and wine.

As with many Chinese dishes, this one comes with an interesting story. I’ve found a few different versions online, but I liked this one:

“Long long ago, there was a beggar. One day he stole a chicken and was pursued by the owner. When he was almost caught and no place to hide, he suddenly hit upon a good idea. He smeared the chicken all over with clay and threw it into the fire. After a long while the beggar removed the mud-coated chicken from the fire. When he cracked open the clay he found, to his astonishment, that the clay together with the feathers had formed a hard shell in which the chicken had been baked into a delicious dish with wonderful flavor. That night he had a very enjoyable meal. Hence the name of the dish.”

Named after the scenic West Lake in Hangzhou, this dish is prepared by first keeping a live grass carp alive in clear water for one to two days to rinse it well and get rid of the smell. It’s then cooked in a tasty marinade composed of rice wine, ginger, soy sauce, sugar, and of course, vinegar.

That concludes our tour of the different regional cuisines of China. Now that we’ve gone south, west, north, and east, I’m curious to know…

为什么？
wèi shén me
Why?