We’re making our way all around China here, one province, municipality, autonomous region, and special administrative region at a time. So far, we’ve been to both Beijing and Shanghai, as well as Heilongjiang, Sichuan and Gansu provinces. Today, we’re heading to the east coast, to Zhejiang province (浙江省 – zhè jiāng shěng).

A CCTV Travelogue piece on Zhejiang.

Zhejiang has an incredibly long history, going back thousands and thousands of years. During the Spring and Autumn Period (春秋时代 – chūn qiū shí dài) (771-403 BC), there were various states thriving in what is today known as Zhejiang. There was the State of Wu (吴国 – wú guó), which was at one point the most powerful. However, they were eventually defeated by the State of Yue (越国 – yuè guó). Things didn’t quite work out for the Yue, either, as they were conquered by the State of Chu (楚国 – chu guó). Are you noticing a trend here? Maybe you can guess what happened next. In 221 BC, the State of Qin (秦国 – qín guó) took over, thus unifying China and ushering in the Imperial era as the country’s first dynasty. Some centuries later, with nomadic peoples invading the north, tons of northerners fled south. This aided in the sinicization of China (汉化 – hàn huà). During this time, Hangzhou became a thriving city. It became the capital of the Southern Song Dynasty (南宋 – nán sòng) (1127-1279), and may have been the biggest city in the world at that time. During the Ming Dynasty, the province of Zhejiang was officially created, and its borders have changed little since. 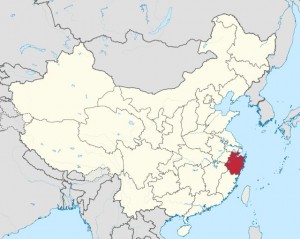 Zhejiang can be found on China’s southeastern coast. It’s to the south of the Yangtze, and to its northeast you’ll find Shanghai. It also borders Jiangsu, Anhui, Jiangxi, and Fujian provinces. It has a total area of 101,800 sq km, most of which is mountainous. The highest peak is Huangmaojian Peak, clocking in at 1,929 meters. Zhejiang province is home to the most islands in China, with more than 3,000. There are also various lakes and rivers in this province. The name Zhejiang actually means “crooked river”; this used to be the name for the Qiantang River (钱塘江 － qián táng jiāng). 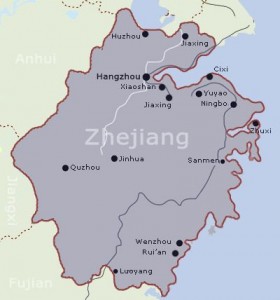 A map of Zhejiang province.

There are four distinct seasons in Zhejiang, which has a humid subtropical climate. The average annual temperature here is 15 to 19 degrees Celsius (59 to 66°F). Spring is warm and a little rainy. Summer is hot, rainy, and humid. Fall is dry, warm, and sunny, and winter gets pretty cold, but at least it’s short. The area is actually threatened by typhoons in the late summer. If you’re planning a trip there, spring is probably the best time to visit.

More than 47 million people call Zhejiang home. As is the case most places in China, Han Chinese people make up a vast majority of the population. There are many Wuyue people (吴越人 – wú yuè rén) here – a subgroup of Han people who speak a different dialect of Chinese. There are also some 400,000 ethnic minorities living here, including She (畲 – shē) and Hui people (回族 – huí zú). 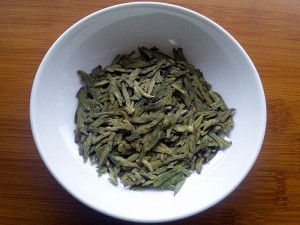 One of China's best teas.

As previously mentioned, Zhejiang is home to many Wu speaking people. On the whole, the province is very linguistically diverse. As it is very mountainous, different villages speak dialects that are completely unintelligible to one another; it must have something to do with all those mountains in between them. These local dialects are a very important part of the culturally identity of the province.

It is also famous for music, as it’s the home to Yueju (越剧 – yuè jù), a form of Chinese opera. This style of opera is elegant and soft, as it is only performed by actresses, who take on both male and female roles. It’s second only to Peking opera in terms of popularity. In addition to music, Zhejiang is famed for its tea, the most famous of which is Longjing tea (龍井茶 – lóng jǐng chá). The cuisine of Zhejiang is renowned throughout the country as well, as it is one of China’s Eight Great Culinary Traditions. Finally, this province is also commonly referenced in poetry, leading to a popular saying that “Above there is heaven; below there is Suzhou and Hangzhou” (上有天堂，下有苏杭 – shàng yǒu tiān táng, xià yǒu sū háng).

A video I made at the West Lake.

Of course, Hangzhou is the most famous place to visit in Zhejiang. This is thanks to its beautiful West Lake (西湖 – xī hú), a UNESCO World Heritage site that is praised as “an idealized fusion between humans and nature.” It’s even on the back of the 1 RMB note here in China. Speaking of lakes, Zhejiang is also home to Qiandao Lake (千島湖 – qiān dǎo hú – lit. “thousand island lake”). There are plenty of water towns to visit, such as Wuzhen (乌镇 – wū zhèn) If you’d prefer mountain climbing to hanging out around water, you can visit Mount Tiantai (天台山 – tiān tái shān), which is important to Zen Buddhism.

With a long history, a rich culture, stunning lakes and mountains, delicious food, and some of the best tea in the world, Zhejiang definitely makes a strong case for “best province in China.” Stay tuned to the blog in the future, as we continue our journey through this massive country that is China.