Exploring the Ancient Capital of Luoyang Posted by sasha on Sep 7, 2016 in Uncategorized

Everyone knows that Beijing is the current capital of China, but that hasn’t always been the case. Many different locations have served as the capital of the Middle Kingdom through the centuries. In addition to Beijing, three other cities make up the Four Ancient Capitals of China (中国四大古都 – zhōng guó sì dà gǔ dū) – Nanjing, Xi’an, and Luoyang. We’re going to take a closer look at each of these historical cities, starting with Luoyang (洛阳 – luò yáng) in Henan province. Home to one of the best examples of Chinese Buddhist art as well as the country’s first Buddhist temple, this is a fascinating city to explore. 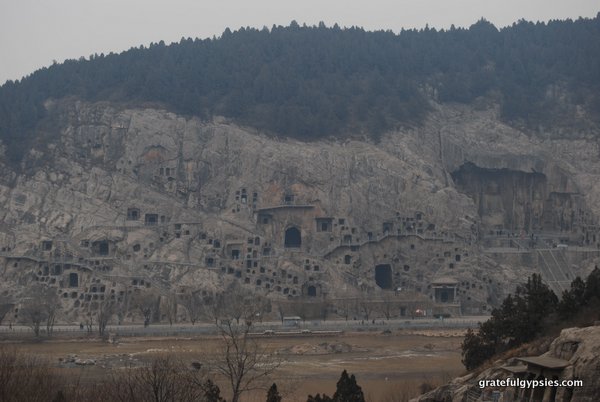 The Longmen Grottoes viewed from across the river.

After Buddhism spread to China from India, the practice of building grottoes in remote mountains also caught on. There are three major Buddhist grottoes in China, one of which is located just a few miles outside of Luoyang. 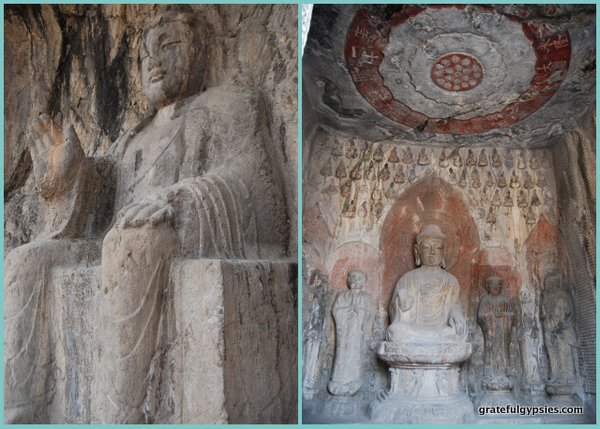 In 493 AD, Emperor Xiaowen of the Northern Wei Dynasty moved the capital from Datong to Luoyang and began constructing the Longmen Grottoes (龙门石窟 – lóng mén shí kū). Work continued on the grottoes through subsequent dynasties for a few centuries, showing a change in the artistic styles of each era. In total, they comprise over 2,000 caves and niches carved into limestone cliffs and are home to over 100,000 Buddhist stone statues. 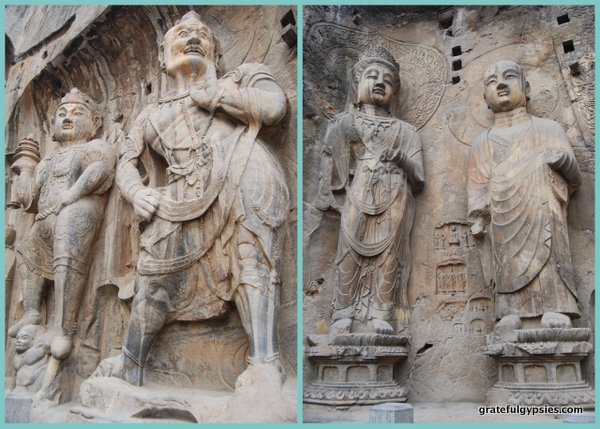 Some of the more impressive statues up close.

The Longmen Grottoes were awarded UNESCO World Heritage Status in 2000, being described as “an outstanding manifestation of human artistic creativity.” Exploring the many caves and admiring the intricate statues makes for an excellent day trip out of the city, and is definitely the highlight of traveling to Luoyang. 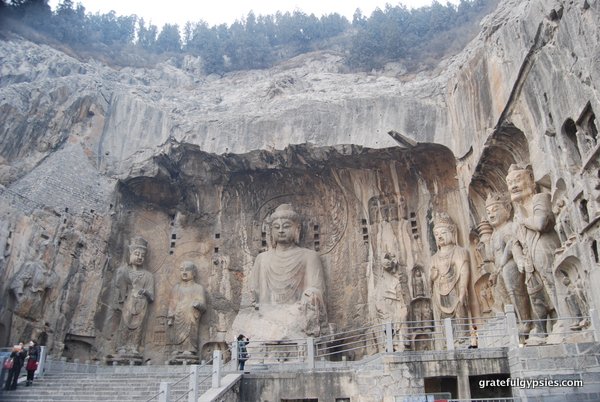 The biggest and most impressive statues.

Fengxian Temple is the largest and most impressive area of the grottoes. Built during the Tang Dynasty, this section contains a massive statue of the Vairocana Buddha sitting cross-legged upon a lotus throne. Towering at just over 17 meters (56 feet), it’s an amazing sight to behold. 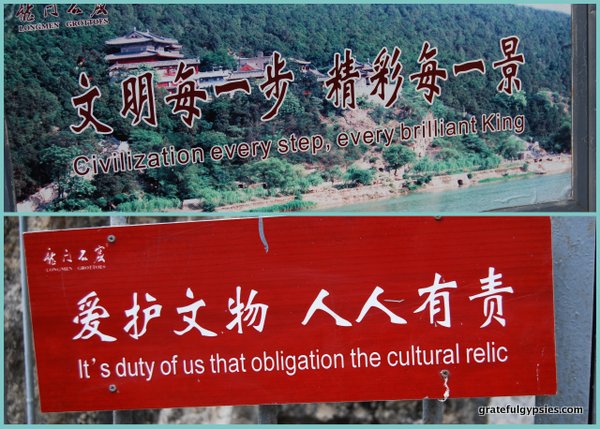 Chinglish is the best.

In addition to the countless carvings and statues, there are also a few funny Chinglish signs scattered around the sight. Be sure to follow the advice of “civilization every step” while exploring the grounds, whatever that means. 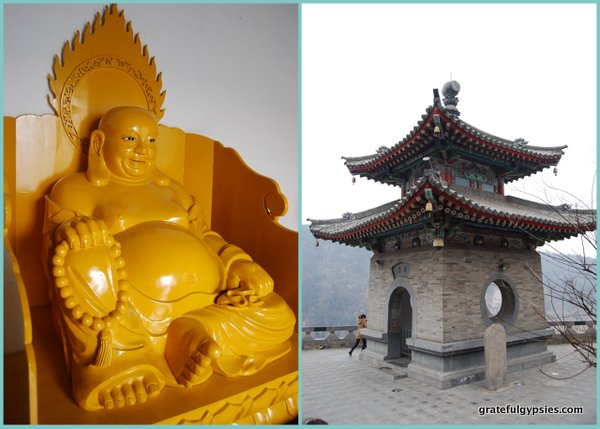 Most of the carvings can be found on the western side of the river. Over on the other side you’ll find the Xiangshan Temple (香山寺 – xiāng shān sì). While the temple isn’t that impressive, it’s worth the walk over there to take in the panoramic view of the grottoes. 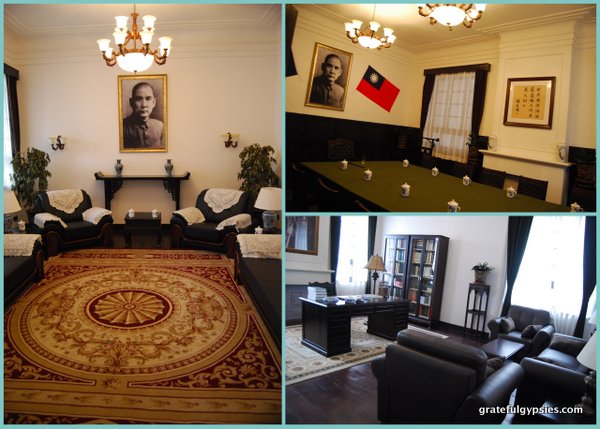 In addition to the temple, you can check out the Jiang Song Villa (蒋宋别墅 – jiǎng sòng bié shù). This was once the summer home of Kuomintang president Chiang Kai-shek and his wife Song Meiling. 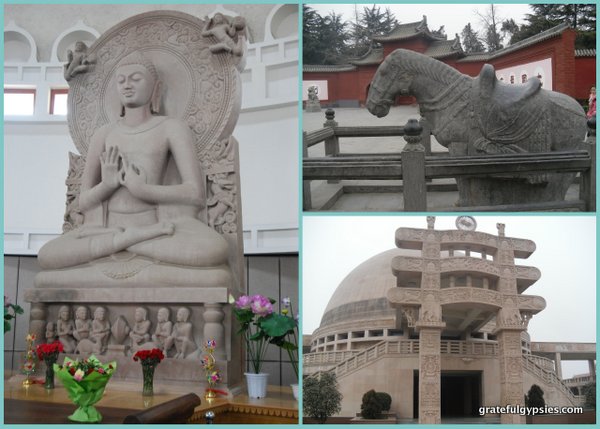 The first in China.

After visiting the grottoes, why not go back even further in time? Built all the way back in 68 AD, the White Horse Temple (白马寺 – bái mǎ sì) is regarded as the first Buddhist temple in China. 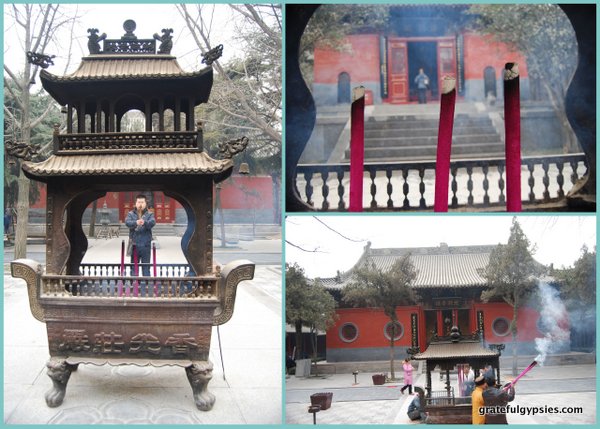 According to the legend, Emperor Ming of the Eastern Han Dynasty sent a delegation of his men to study Buddhism. They encountered two Buddhist monks who returned with them to China riding white horses and carrying Buddhist scriptures and statues. The emperor built a temple in their honor, where the monks lived and translated the scriptures into Chinese. 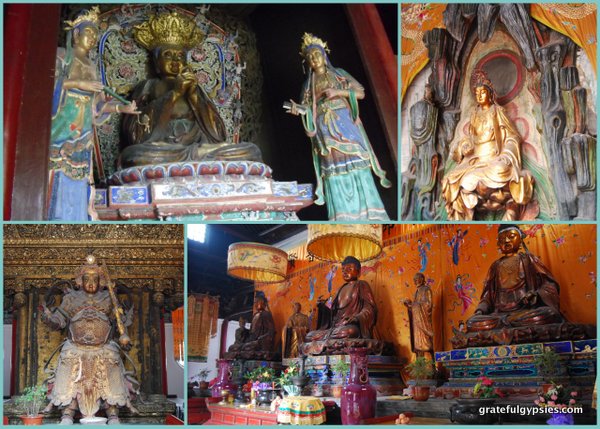 Some of the many statues.

Whether or not that story is actually true, the temple has undergone many renovations and changes over the years. As with many other places of worship in China, the White Horse Temple suffered tremendous damage during the Cultural Revolution. It has since been restored and renovated, most recently with the addition of an Indian style temple in 2008 to enhance the Buddhist cultural links between the two countries. 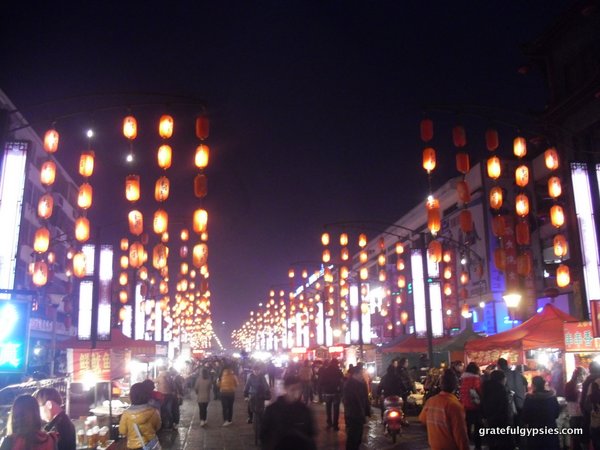 While there is an airport with flights to a few cities in China, the best way to reach Luoyang is by train. One great option for traveling here is taking a little historical tour of China, coming to Luoyang by overnight train from Beijing and heading out on a high-speed line to Xi’an. Getting around to the famous sights is easy by public bus or cab. There are a few hostels in the city which are great for budget travelers. As far as eating goes, if you’re not up for the massive water banquet (水席 – shuǐ xí) that’s famous here, just hit the night market and fill up on a bunch of cheap and tasty snacks. To see both the grottoes and the temple, you’ll probably want to spend two nights in Luoyang.