Geography in Chinese Posted by sasha on Jan 4, 2013 in Culture, Vocabulary

For some it comes easy, but for many people geography is a difficult subject in school. It’s even more complicated when you try it in another language. As an English teacher in China, I find that my students are often confused when it comes to talking about geography in English. Of course, I face the same problem in Chinese. With so many continents, mountains, countries, rivers, and so on, it’s hard to remember the words. While it may be difficult, it is still an important part of life. As such, I’m going to introduce some words and phrases in Chinese related to geography (地理 – dì lǐ). It’s a big world out there, so let’s start out with your basic directions, so grab your…

It should be noted that directions such as “northwest” and “southeast” are actually pronounced “west north” (西北 – xī běi) and “east south” (东南 – dōng nán) in Chinese. In China, you’ll often hear people grouped as “northerners” (北方人 – běi fāng rén) or “southerners” (南方人 – nán fāng rén). Remember these characters, as they’re used in the names of continents, oceans, cities, roads, and much more in Chinese. Take, for example, the place where I call home – the “Northern Capital” (北京 – běi jīng), or Beijing as it’s better known to most.

While there’s no universal agreement on the exact total number of countries in the world, we all know that it’s a lot. I’m not going to try to teach you all of the Chinese words for the various countries around the world, because I don’t know them all and, well, that would be boring and tedious. Instead, here are some things to remember: 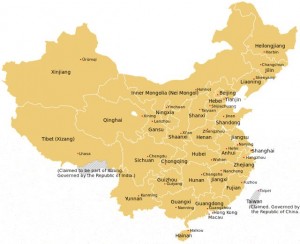 China kind of looks like a chicken on the map, doesn't it?

There are 22 provinces in China; 23 if you count Taiwan as a province, but I’m not here to start any territorial disputes. There are also four municipalities (直辖市 – zhí xiá shì), five autonomous regions (自治区 – zì zhì qū), and two special administrative regions (特别行政区 – tè bié xíng zhèng qū). Hey, I didn’t say this lesson was going to be easy. For more detailed descriptions of these, keep an eye on the blog and follow our ongoing “Better Know A…” series, where I cover one of the regions of China in more depth.

A quick tour around the map of China.

The Talking Heads once wrote a song that goes, “Find your city. Find yourself a city to live in.”  More than half of the world’s population have done just that, and nowhere is this mass urban migration more obvious than right here in the Middle Kingdom. Between the years 1950 and 2005, the percentage of Chinese people living in cities rose from 13% to over 40%, and it’s going up every day. Some have the high honor of being the capital city (首都 – shǒu dū), while others are simply provincial capitals (省会 – shěng huì). There are far too many cities and no real rules for translating the names into Chinese. Just check yours out in a dictionary; mine is Detroit (底特律 – dǐ tè lǜ).

There’s a lot more to learn when it comes to geography, but I think that’s enough for one day here. Here’s a short YouTube video to help you learn a few more useful words and practice your reading, listening, and pronunciation: 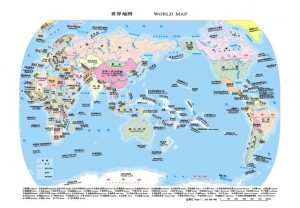 Another good idea is to get yourself a world map (世界地图 – shì jiè dì tú) in Chinese. Mark the places you have been and the places you want to go, and then start learning the Chinese names. As always, we’ve got plenty of other resources here to help you learn Chinese.