Shangri-La Posted by sasha on Dec 17, 2015 in Uncategorized

After exploring the old town of Lijiang, trekking Tiger Leaping Gorge, and chilling in Haba Village, our Yunnan trip rolls on. Shangri-la (香格里拉 – xiāng gé lǐ lā) is a small town nestled in Yunnan Province’s north west corner. It was originally named Zhongdian, but they officially changed the name in December 2001 in an effort to increase tourism to the area. Most people know Shangri-la as the mythical place described in James Hilton’s novel “Lost Horizon.” There has been much debate over the true location with Tibet, Sichuan and Yunnan all laying claim. Whether or not it is really the place that inspired Hilton’s novel, it is a worthy of a visit. 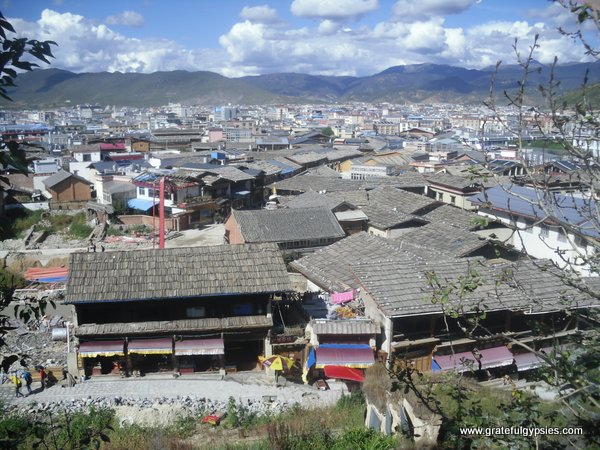 The old town of Shagri-La

Unfortunately half of the old town burned down in early 2014. Efforts to rebuild it have been going on ever since. It is still possible to visit and see the remaining half, and hopefully it will be totally rebuilt within a year or two. There are two temples in the town that were untouched by the fire – the Golden Temple (金庙 – jīn miào) and the Baiji Temple (百鸡寺 – bǎi jī sì). 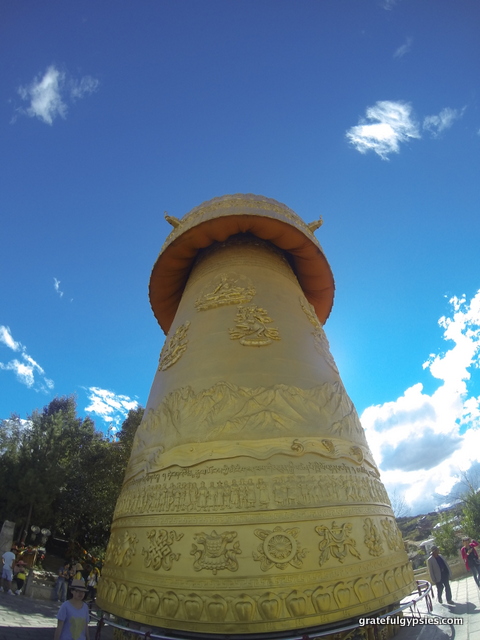 Hard to miss the Golden Temple. 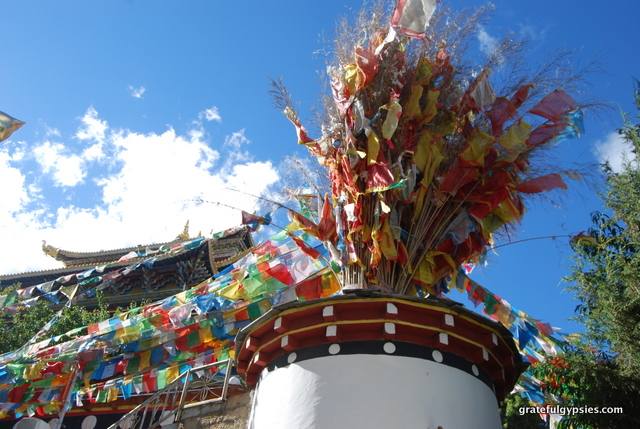 The Golden Temple has the world’s largest prayer drum and it takes at least six people to spin it around. It has three different buildings with the main building displaying a large Buddhist statue. Baiji Temple is translated to 100 chickens temple as there are many chickens running around the temple grounds. It is just up the hill from the Golden Temple. It also offers great views of the town and surrounding mountains. 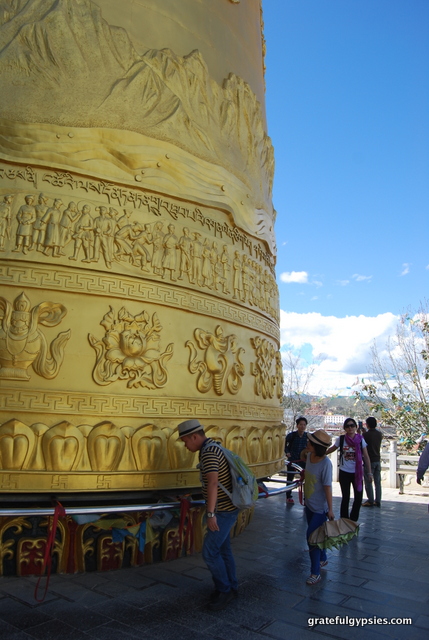 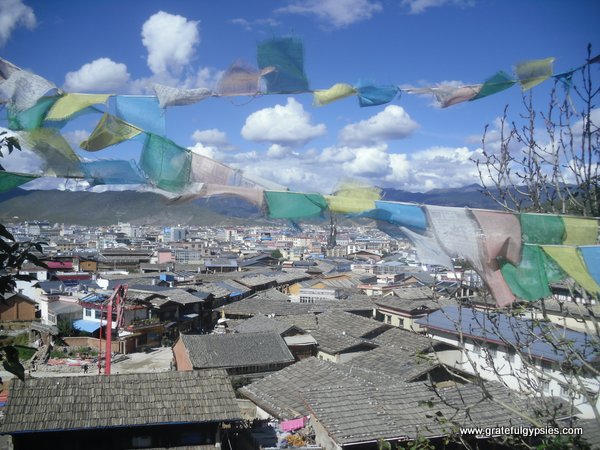 Beautiful views all around.

Both temples offer some aspects of the Songzanlin Monastery (松赞林寺 – sōng ​zàn ​lín ​sì​) for free. The Monastery is probably the biggest attraction in the town, but we decided not to visit because of the high ticket price and we had read that it was more of a tourist trap than an actual monastery. 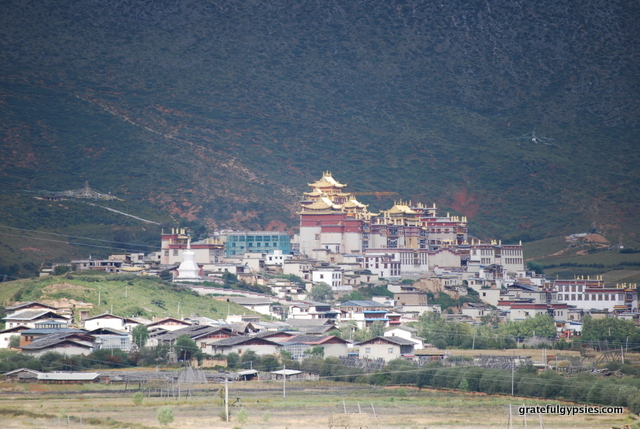 Songzanlin Monastery in the distance.

Many of the attractions lie outside the town in the surrounding area. One such place is Napa Lake (纳帕海 – nà pà hǎi). Located 5 kilometers from the town, it’s possible to rent a bicycle and visit on your own two wheels.

The circumference of the lake is 23 kilometers but the entire loop from the town, around the lake and back to the town is more than 40 kilometers. It’s a great way to get some exercise and get up close with nature and animals. The water level is lower in the fall and winter so it’s possible to see sheep and cows grazing in the lake bed. 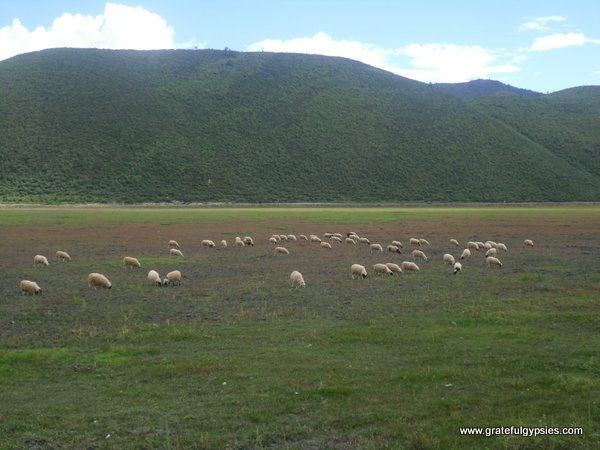 Grazing sheep in the lake bed.

Many other types of wildlife can be seen here such as different bird species. Tibetan style houses dot the perimeter of the lake housing all the Tibetan people living in the area. The admission is free, however some people have started to make checkpoints where they stop visitors and ask for a 60 yuan fee. On the other side of the town is Pudacuo National Park (普达措国家公园 – pǔ dá cuò guó jiā gōng yuán), the first national park in China. After doing a bit of research we opted out of this attraction also because of the inflated entrance ticket. Other reviews say that it’s not really possible to really get out there and enjoy nature, as in typical China style it’s forbidden to stray from the path. 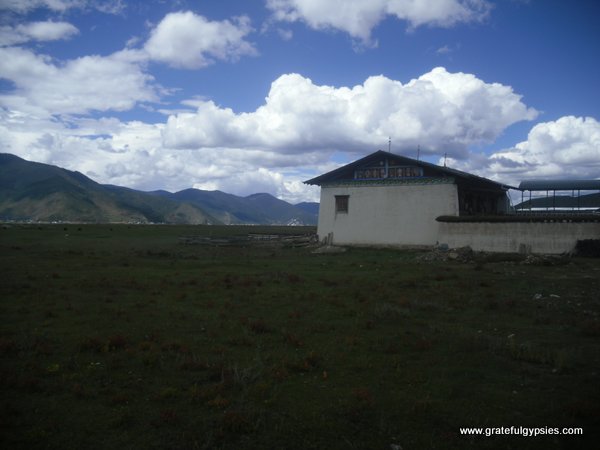 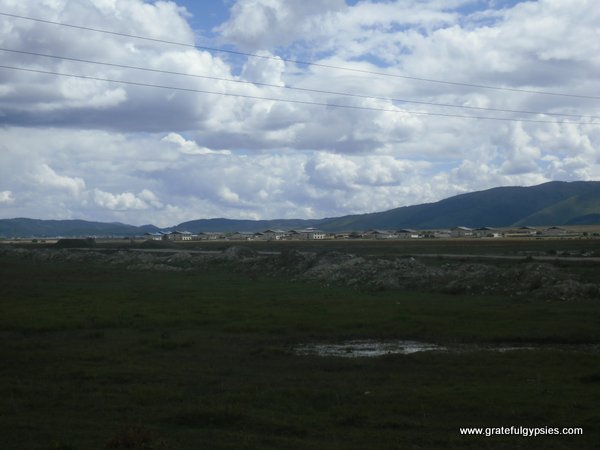 One of the many Tibetan villages around the lake.

In the evenings many local people converge on the town square for dancing and socializing. Anyone is allowed to join and most of the dances are traditional Tibetan style. Despite the tragedy of the fire in the old town, Shangri-la is still a great place to visit and experience true Tibetan culture, without the hassle of added permits and required tour guides that entail an actual trip to Tibet. 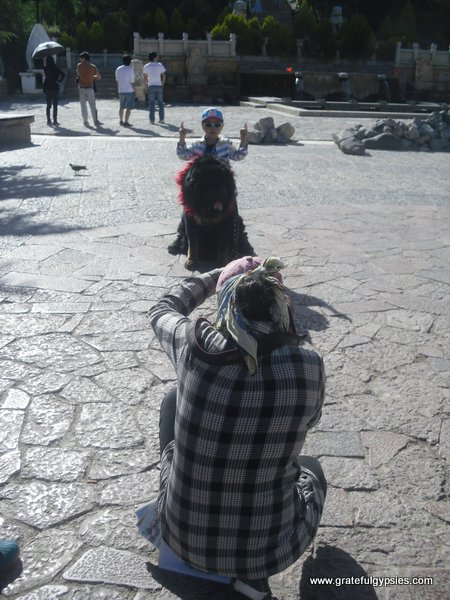 Silly tourists in the town square. 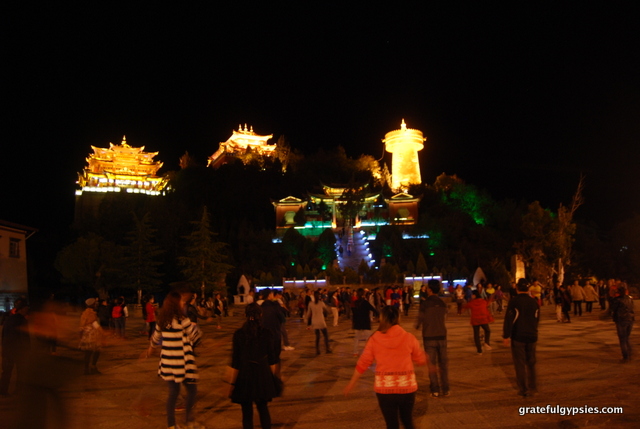 Dancing in the square.