Better Know a… Province (Yunnan) Posted by sasha on May 5, 2013 in Culture

Yunnan on the map.

We’re making our way all around the massive country of China bit by bit here in this ongoing series. Last time, we visited Shaanxi province, the home of the legendary Terracotta Army in Xi’an. The next stop is a place that I will most likely call home come next year – Yunnan (云南 – yún nán). With diverse scenery, wildlife, and people, Yunnan is a remarkable place. Its name can be translated roughly as “south of the clouds”, and you’ll realize it’s a very apropos name if you should get the chance to visit.

A nice introduction to Yunnan from CCTV’s “Beautiful China.”

In the 1960s, geologists in Yunnan discovered fossils of the Yuanmou Man (元谋人 – yuán móu rén), the oldest known hominid fossil in China, and all of East Asia for that matter (1.75-2.5 million years old). Human settlements also existed around the area of Lake Dian during the Neolithic period. Around the 4th century BC, the Dian Kingdom (滇国 – diān guó) would be established. By the time of the Han Dynasty in the year 109 BC, Emperor Wu established Yizhou province in the area, along with 24 regions. A little later on in 109 AD, a county named Yunnan was set up – the name came from the fact that it was south of Mt. Yun (云山 – yún shān).

Many years later the Kingdom of Nanzhao (南诏 – nán zhào) came to power. Made up of many ethnic groups – most notably the Bai people – this kingdom rebelled against the Tang Dynasty in 750 AD. The rebellion was successful, and as a result the kingdom quickly expanded throughout Yunnan and even into Burma, Thailand, Laos, and neighboring Sichuan province. After taking the city of Chengdu, however, their power began to decline, and they were eventually overthrown in 902. 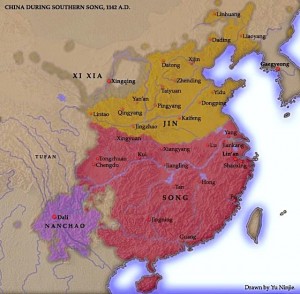 Next to power was the Kingdom of Dali (大理国 – dà lǐ guó), established in 937. Duan Siping was the founder, and he was succeeded by 22 kings during a span of over 300 years. In 1253, the invading Mongol Empire took over, and a few years later in 1274, the province of Yunnan was established. Chaos enveloped Yunnan when the Mongols were overthrown up until the Ming Dynasty came in 1381. During the rule of the Ming, there was a war with Burma. Eventually, the Qing Dynasty would take over in 1681.

With the end of Imperial China at the fall of the Qing Dynasty, Yunnan was ruled by local warlords and financed by opium harvesting. In modern times, the border of Yunnan experienced the Sino-Vietnamese War (中越战 – zhōng yuè zhàn zhēng), launched in 1979 by China due to Vietnam’s invasion and occupation of Cambodia. 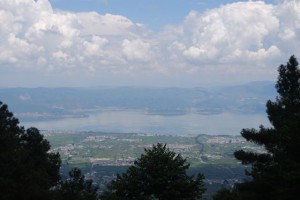 View of a lake from a mountain - pretty standard in Yunnan.

You’ll find Yunnan in the southwest corner of China, where it shares a border in China with Guangxi, Guizhou, Sichuan, and Tibet in China, as well as with Myanmar, Laos, and Vietnam. The province is situated in a mountainous area, and it can basically be split into an east and west region. The northwest features high elevations, with many mountain ranges and rivers running north and south, including the mighty Mekong River (湄公河 – méi gōng hé). Also, the west is known for its canyons while the east is known for its plateaus. Most people live in the southeast part of the province, which has a lower elevation. A wide variety of flora and fauna can also be found in Yunnan. The province is split in 16 prefecture level divisions, and its capital is Kunming (昆明 – kūn míng), commonly referred to as the “Spring City” (春城 – chūn chéng) in China.

As you can imagine from Kunming’s nickname, the climate of Yunnan is generally very pleasant and moderate. Most of the province is considered to be in either the subtropical highland or humid subtropical zone. In Kunming, homes come without central heating and it’s rare when you need to turn on the A/C in the summer. Of course, temperatures can get below freezing on mountaintops and can also be incredibly hot in the far south parts of the province. Most of the rain falls between June and August in Yunnan. 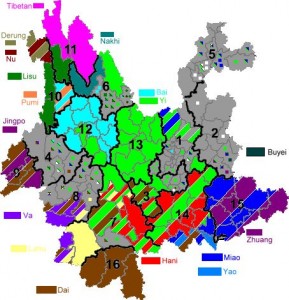 As of 2009, the population of Yunnan province is about 46 million. The area has always been known for its diversity in terms of people, however, thanks to the Japanese invasion during WWII, a huge migration of Han Chinese into the area occurred. Still, nearly 34% of the population of Yunnan is composed of ethnic minorities. Apparently, of the 56 recognized ethnic groups in China, you’ll find 25 in Yunnan. These groups are widely spread throughout the province, as you can see in the figure below.

Of course, with such a varied landscape and a diverse population, Yunnan is full of culture. Most ethnic groups have their own distinct dialect, fashion, and customs. In fact, the Naxi people are the only ones in the world to still use a pictographic writing system. Each ethnic group also has its own distinct festivals, including the Torch Festival of the Yi people and the Water-Splashing Festival of the Dai. Yunnan cuisine is also varied, and includes the famous “Under the Bridge Rice Noodles” (过桥米 – guò qiáo mǐ xiàn) that are slurped up all over the country. This province is also very famous for its tea, most notably the Pu’er tea (普洱茶 – pǔ’ěr chá). For some interesting cultural quirks, check out the article on the “Eighteen Oddities of Yunnan.” 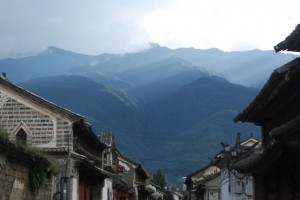 One of the most famous places in Yunnan is without a doubt the city of Dali, home to both the Nanzhao and Dali Kingdoms of years past. Most visitors head to Dali Old City (大理古城 – dà lǐ gǔ chéng) to enjoy walking on the cobblestone streets, cycling around Erhai Lake, or hiking along the pathway atop Mt. Cang. Speaking of old towns, the Old Town of Lijiang (丽江古城 – lì jiāng gǔ chéng) is an UNESCO site with a history going back 800 years. Located in the northwest part of Yunnan, this town is one of the most popular domestic destinations for Chinese tourists, so beware of traveling here during holidays. Not far from Lijiang, you’ll also find the Tiger Leaping Gorge (虎跳峡 – hǔ tiào xiá), a scenic canyon and epic place for a multi-day hike.

Swimming and cycling around Dali.

I’ve been enchanted with Yunnan province since I first moved to China back in 2008, and while I finally got the chance to visit in 2011, one week was far too short. The laid-back style of Kunming, the hippie vibe of Dali, the mouth-numbingly spicy Dai food, the awe-inspiring scenery, and the friendly nature of the people have had me wanting to go back ever since. I look forward to exploring more of the natural beauty of Yunnan and learning as much as possible about the varied culture of its many ethnic groups in the years to come, and I’m especially excited about sharing those experiences with all of you fine people here! 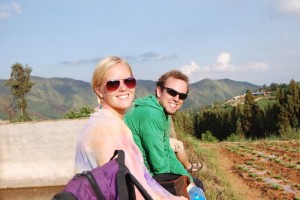 All smiles hiking outside of Kunming, my soon-to-be home.