A Psy-Trance Festival in China – Spirit Tribe Posted by sasha on Apr 13, 2015 in Culture

We came. We saw. We got our bodies painted, tried spinning poi, and danced the night away under a lunar eclipse. 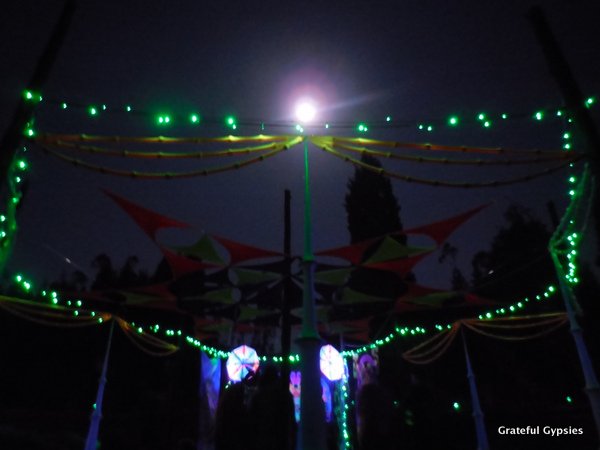 Dancing under the full moon.

Over the Tomb Sweeping/Easter weekend, a group of 250 revelers descended on a small village outside of Kunming for the inaugural Spirit Tribe festival. Thrown by Beijing’s Goa Productions, this two-day psytrance party attracted a solid mix of locals, expats, and travelers drawn by the idyllic location and intimate vibe. We didn’t sweep any tombs or paint any eggs, but we sure had a good time. 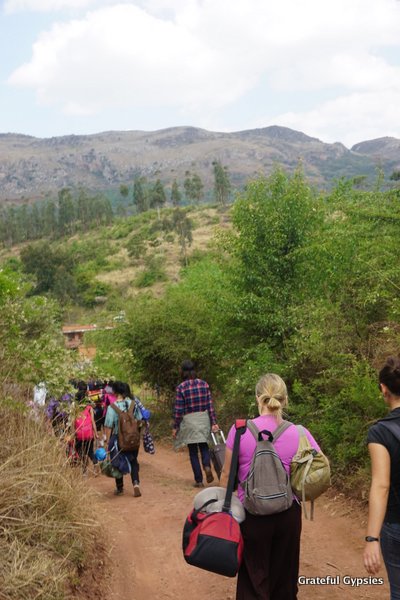 Hiking into the festival.

It being the first time, no one quite knew what to expect. A crowd gathered in Kunming’s city center to board the buses that festival organizers provided. With tents, sleeping bags, and perhaps a few tucked away bottles of liquor in tow, we got dropped off on the side of the road and hiked into the festival site.

Great place for a small festival.

Surrounded by mountains with a natural lake, this proved to be the perfect setting for a weekend of music, art, and so much more. There was plenty of space to set up camp; most pitched a tent while some chose simply to hang a hammock. With music scheduled to go on for nearly 48 hours straight, no one planned to do much sleeping anyways. 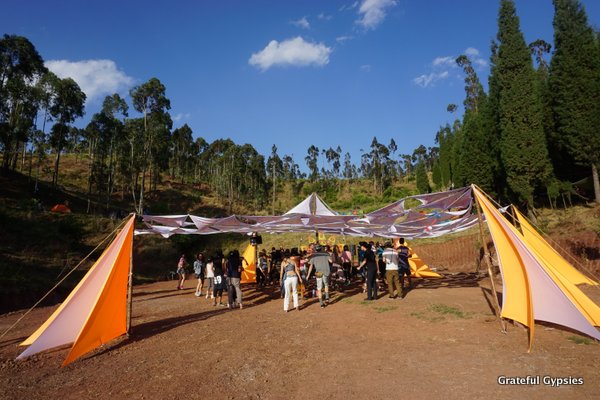 With just two stages – Dance and Chill – moving around the festival was a piece of cake. Both stages were decorated in a colorful mix of tapestries and string art, adding a bit of eye candy to the continuous beats. 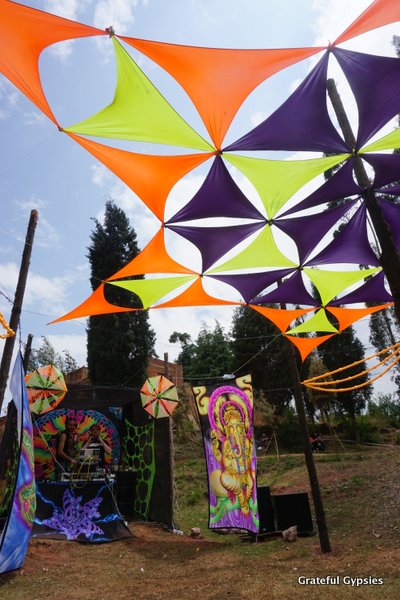 Kickin’ back at the Chill Stage.

The festival was about more than just the music, as there were also daily yoga sessions and workshops on topics ranging from Tibetan Buddhism to improv comedy. This already sets Spirit Tribe apart from other festivals in China, which rarely feature anything other than music. Also making this festival unique was the fact that the local farmers and goat herders went about their business just like it was any other day. 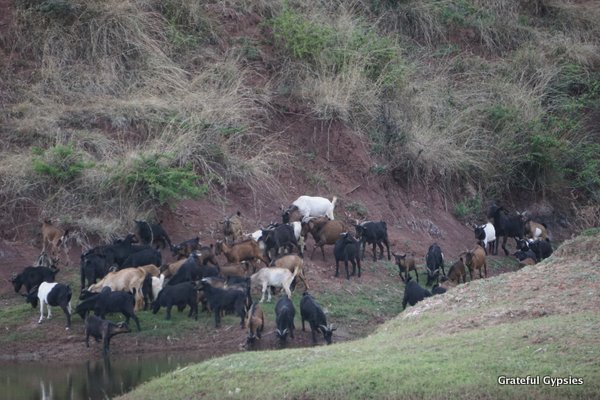 Even the goats were gettin’ down!

All in all, it was an incredibly successful event. Aside from some light showers early on the last morning, we were blessed with perfect Yunnan weather. The small size made it easy to move around and make new friends, who came from all over China and the world to be a part of this special event. 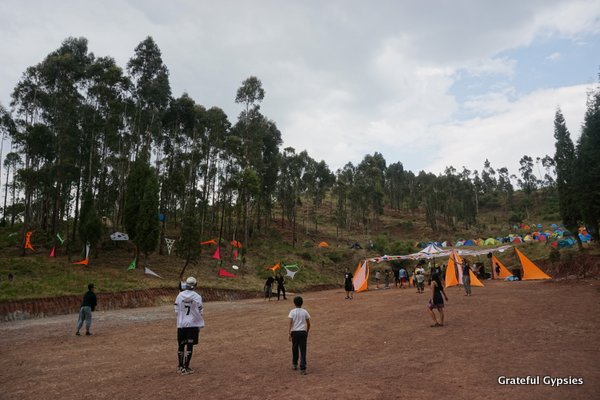 Nothing like a game of frisbee in the afternoon.

Days were spent tossing around the frisbee, playing hackey sack or jian zi (毽子), practicing poi spinning, hiking in the surrounding area, or just lounging by the lake in a bean bag. 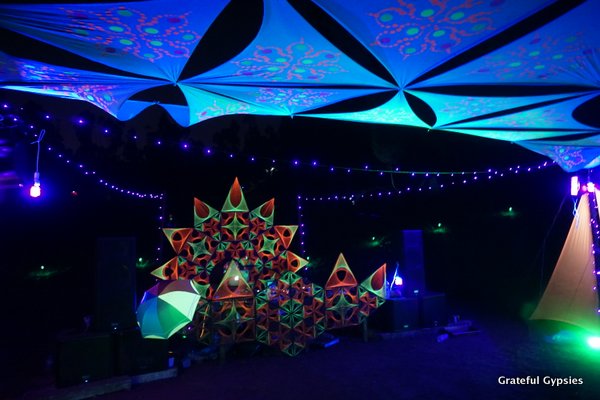 The many colors of a psytrance party.

The place lit up in a sea of neon and came to life at night, with a mass of bodies grooving as one under the colorful canopy of the main stage. The sun went down behind the trees, the stars and the moon filled the night sky, and the party continued until the sun peaked its head over the hills again. 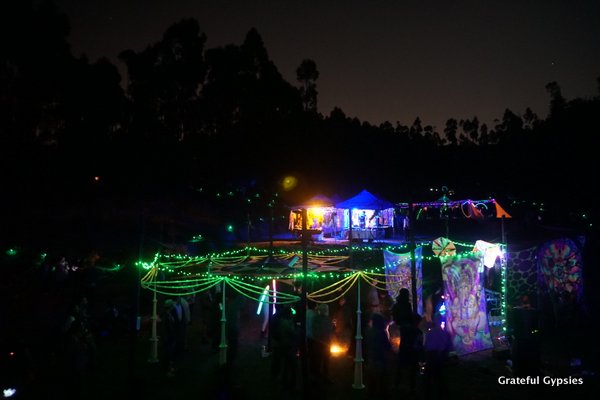 The night time is the right time.

Day turned into night and then back again, and all of a sudden it was time to go. They say time flies when you’re having fun, and that old adage sure rang true at this festival. In just two days, a small community was formed, came together, and then had to dissipate; such is the fleeting nature of music festivals. Here’s to hoping that the first incarnation of this one was exactly that – the first one – and that there will be more of its kind in the years to come. 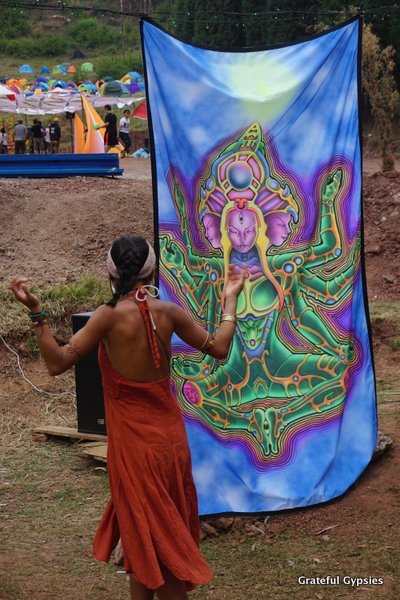 A festival-goer letting loose and feeling the music.

Music festivals are a passion of mine and I’ve been to dozens of them back home in the US as well as others in the Netherlands, Mexico, Jamaica, and China. Even though I’m admittedly not the biggest psytrance fan – I’d rather see a band than a DJ – this was one of my most enjoyable festivals in years. It was by far the best I’ve experienced in China for a variety of reasons. The location was perfect, they did a great job decorating and with the sound, and it was for the most part very well run. It was amazing to be at a show in China with no curfew and no police presence – two things every other festival I’ve been to has had. 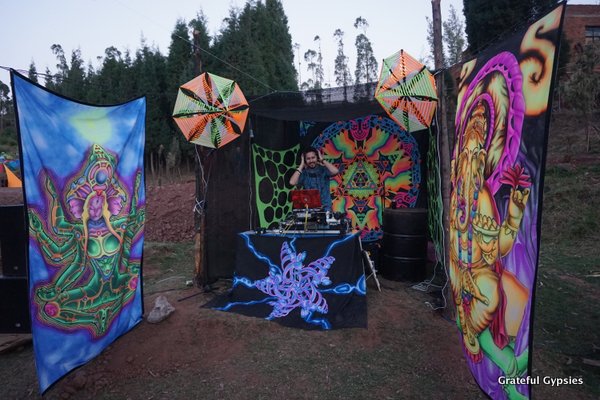 Thanks for a good time, Goa Productions!

That being said, there were of course a few things that a first-time festival could improve on in its sequel. Namely, the issue of food and drink. Attendees were told not to bring any of their own, but then the small kitchen and overworked staff had a hard time keeping up with orders. On the last morning, they were completely out of food and drinking water. This is just not acceptable for a music festival that told people not to bring any food or water. Also, while there were indeed some people who wanted to party all night, not everyone was thrilled about the loud and high energy music blasting from the Dance stage at all hours. It would have been much nicer to have the Chill stage closer to the tents so that those who wanted to at least try to get a few hours of sleep could do so. 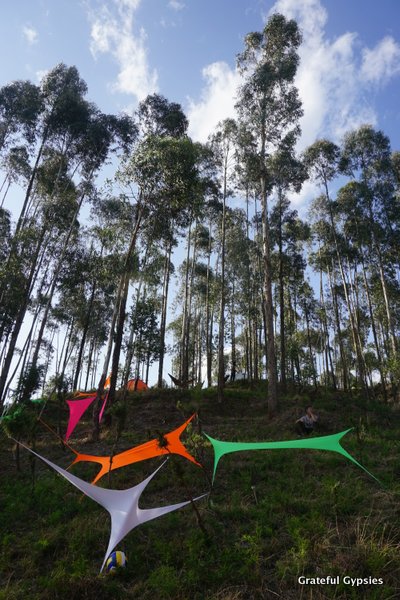 A few slip-ups, but a great festival for the most part.

All in all, though, Spirit Tribe was an awesome experience. I’ve never seen such a like-minded community of art and music lovers get together at the same place in the same time here, and it was a magical thing to be a part of. Here’s to hoping for more gatherings at this beautiful site in the province I now call home.