Water Splashing Festival in Yunnan Posted by sasha on Apr 16, 2015 in Culture

Yunnan province is one of the most ethnically diverse places in China – among the country’s 56 ethnic groups, 25 reside here. One such group is the Dai (傣族 – dǎi zú), who live primarily in the southern region of Yunnan known as Xishuangbanna (西双版纳 – xī shuāng bǎn nà) and are also in neighboring Laos, Thailand, Vietnam, and Myanmar. As with other ethnic minority groups in China, the Dai have their own unique culture – clothing, language, cuisine, and festivals. As they’re closely related to Thai people, they also celebrate the New Year from April 13th-15th. Known as the Water Splashing Festival (泼水节 – pō shuǐ jié), this is a fun-filled three days with dragon boat races, temple visits, parades, and an epic water fight on the last day. Here are some highlights from this year’s celebration in the city of Jinghong (景洪 – jǐng hóng), capital of Xishuangbanna. 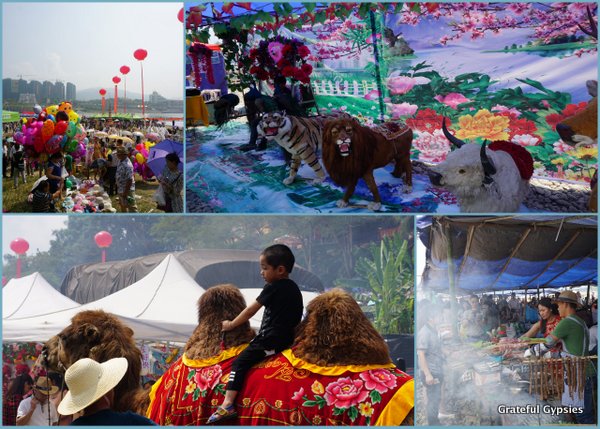 Hot and noisy on the Mekong River.

On the first day, the festivities are centered around the Mekong River, known as the Lancang (澜沧江lán cāng jiāng) in Chinese. Along the riverbank, there are various BBQ stalls, make-shift photo studios, carnival games, and souvenir shops. Massive crowds of tourists flock here to take part in the festival, which is one of the most famous celebrations in China. 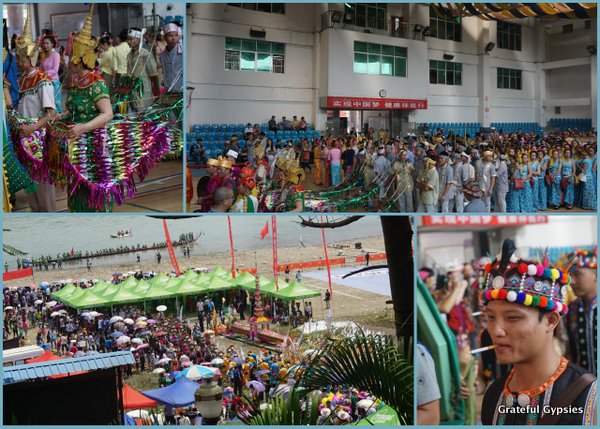 A parade to welcome in the new year.

In the nearby gymnasium, Dai people gather in their most colorful clothing for a performance and parade. Singing, chanting, and playing drums, they march through the streets and down to the river for a large ceremony. A group of monks lead the group in prayer and give blessings to the festival before bamboo fireworks are set off, one of which explodes into a colorful sea of streamers. 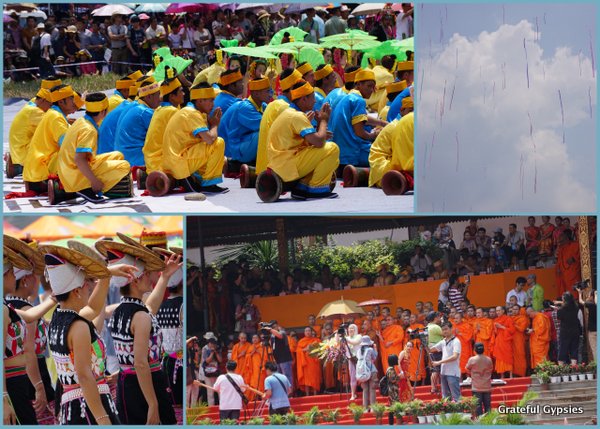 The ceremony kicking off the celebration. 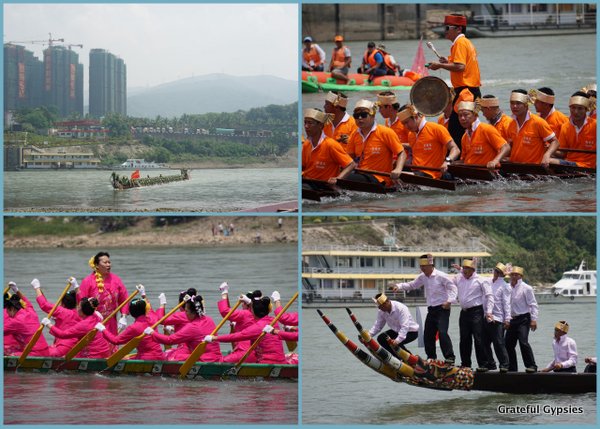 Next up are the dragon boat races (龙舟竞渡 – lóng zhōu jìng dù). Huge teams dressed identically in traditional clothing paddle massive wooden boats up the river racing two at a time. A few people stand on the back, most sit in the middle and furiously row, and a few dance at the front. In the middle, a leader guides the rowers with a drum or gong. The races can be quite intense, not only on but off the water as well – huge crowds jockey for position with selfie-sticks raised high to get that perfect WeChat picture. 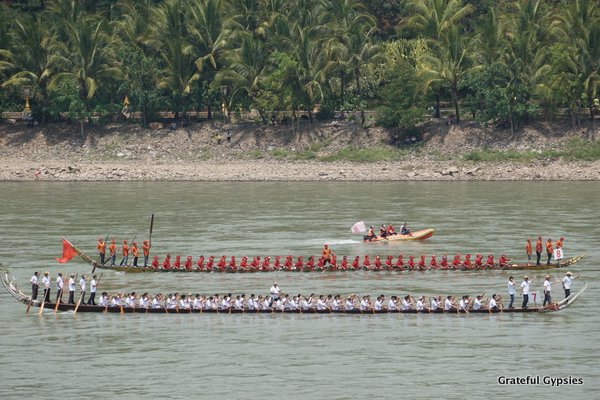 In the middle of an intense race. 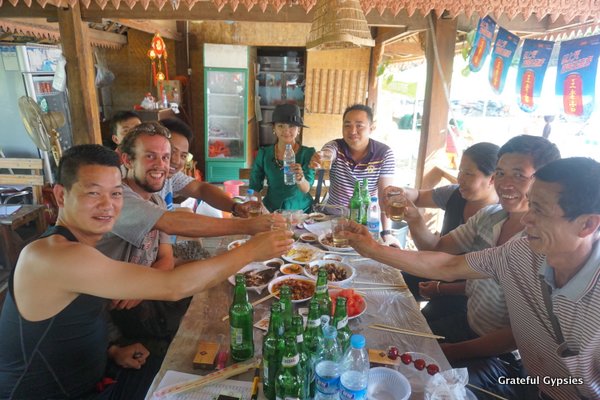 When the races finish up, most seek shelter from the intense heat and punishing sun in the many restaurants/bars along the river. Not many foreigners seem to make it here, so I was even more of a novelty than usual and was invited a few different times to sit down to eat and drink with complete strangers. You gotta love the hospitality in China, especially during traditional festivals. 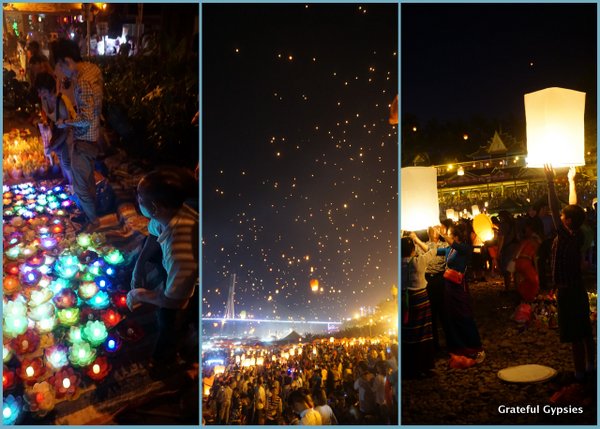 Thousands of lanterns fly up in the night sky.

At night, the crowds descend on the banks of the mighty Mekong yet again, this time to release hundreds of lanterns into the sky. This is thought to drive away bad luck and bring in the good, and it’s quite the sight to behold. While I’ve seen plenty of lanterns sent off traveling in SE Asia and even at American music festivals, nobody can top China when it comes to sheer numbers.

A panorama of the lanterns being sent off. 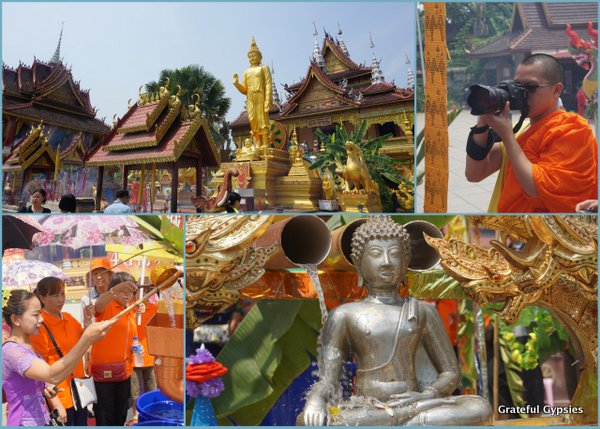 The second day is primarily a religious one. As with Thais, Laotians, and their Shan brethren in Myanmar, the Dai people are Buddhist. Generally, high ranking monks will lead a special ceremony in a local temple in the morning. Throughout the day, people come to the temple to wash the Buddha image, often with scented water. Performing this cleansing ritual ensures good luck and prosperity in the new year.

A local temple in Jinghong. 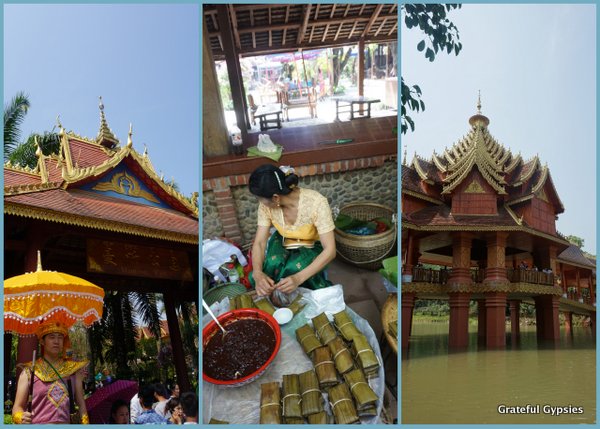 The park, which looks far more Thai than Chinese.

You’ll also see parades both large and small as the Dai people proudly march through town, singing, banging on drums, and enjoying their most important festival of the year. As for the tourists, the streets are clogged with people heading to the park, window shopping, or going for a meal. 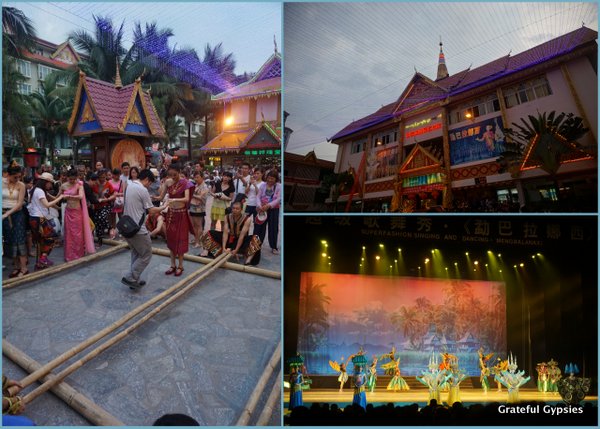 Song and dance performance in the town.

Every evening in Jinghong, you can also catch a performance full of traditional minority clothing, songs, dance, and more. Before the show, Han Chinese tourists are led through a variety of games where they attempt to speak the local Dai language, sing their songs, and pull off their dance moves. It’s quite hilarious, and a good reminder of the many differences across China’s ethnic groups. 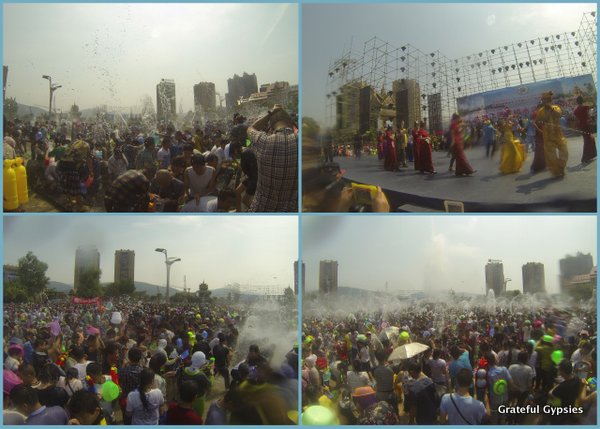 Time to get soaked!

On the final day of the festivities, everyone hits the streets armed with buckets, squirt guns, and water balloons in what just might be the biggest water fight on Earth. No one is safe on the road, and you can even be hit from above by locals hanging out their window. In Jinghong, revelers gather by the thousands at the Water Splashing Square to get soaking wet. There’s also a bit of a song and dance show going on up front, and even the host, dancers, and police on the stage are all targets for splashing. 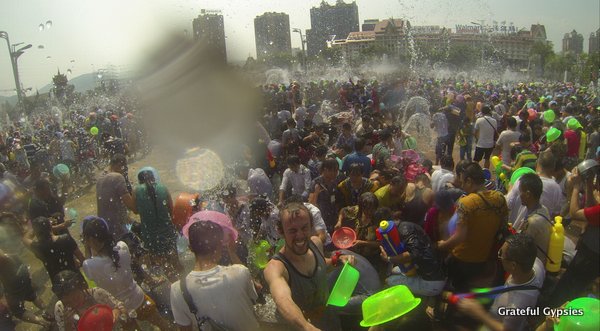 Having celebrated Songkran in Thailand last year on the island of Koh Pha Ngan, I thought I knew what to expect heading to Jinghong. Nothing could have prepared me for the madness of this festival in China, though. Once again, the sheer number of people here is just overwhelming. Whereas the water fight was mostly between those on the side of the road and those driving by in Thailand, this was a free-for-all of everyone for themselves. On Koh Pha Ngan, the water fighting is just a part of the party, as there’s also a parade, a DJ, and people selling drinks. In Jinghong, however, the entire focus is on the splashing. It was fun for a while, but after two hours I was drenched, had ears and eyes full of water, and a vicious sunburn. I’m glad I went and got to experience this festive celebration in my new home of Yunnan, but I think I’ll head back to Thailand for it next year.