Summer Fun in And Around Beijing Posted by sasha on Jun 14, 2022 in Culture, Vocabulary

Summer is right around the corner (夏天就在拐角处 xiàtiān jiù zài guǎijiǎo chù). It’s definietly my favorite season (季节 jìjié). Get ready for it by brushing up on your Chinese summer vocabulary. In this post, we’ll dive into all the options for summer fun in and around Beijing (北京 běijīng). 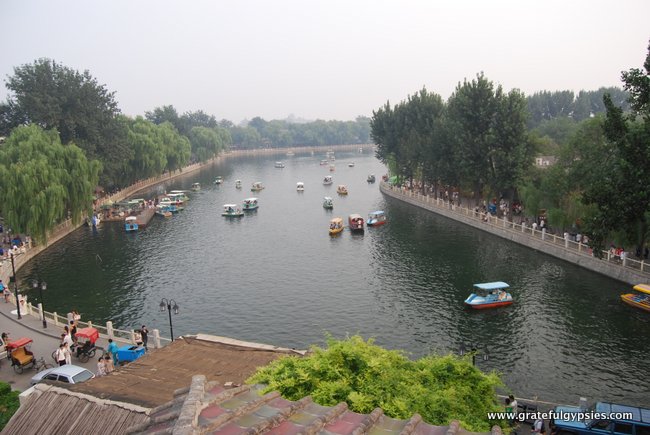 Summer Fun in the City

The winter (冬天 dōngtiān) months in Beijing are brutal, so people like to get out and enjoy the warm weather while it lasts. There are tons of things to do in the city that are more fun in the summer, so get out there and take advantage of it!

Check out some of the parks and temples, play games in the street, or take a boat out on Houhai (后海 hòuhǎi). Wander through the maze of hutong (胡同 hútòng) – Beijing’s traditional alleways – and take in the local culture (地方文化 dìfāng wénhuà). You’ll find men playing chess or elders practicing water calligraphy.

In the evenings, it’s all about the music, as people congregate in local parks to boogie down. Square dancing (广场舞 guǎngchǎng wǔ) is definitely a favorite summer pastime across the country. You’ll see a clip at the end of this very old school video from our YouTube channel:

Go For a Hike

There are many great hiking opportunities in the Beijing area, as the city is actually surrounded by mountains. For many city-dwellers, a popular summer activity is heading out of the city to hike/climb (爬山 páshān). While the heat of summer in the concrete jungle (混凝土丛林 hùnníngtǔ cónglín) can be a bit intense, it’s usually much cooler up in the mountains.

If you’ve got the initiative and can surf the ‘net in Chinese, it’s possible to plan hiking trips on your own, as public buses will take you just about anywhere. However, if you’d rather just join a group and have all of the tedious planning work taken care of, you’ve got lots of choices. There are hiking groups that head out on trips 3-4 times a week from the city in the summer months. Escaping the traffic jams and crowds for at least a few hours is great, and it’s good exercise (锻炼 duànliàn) as well. 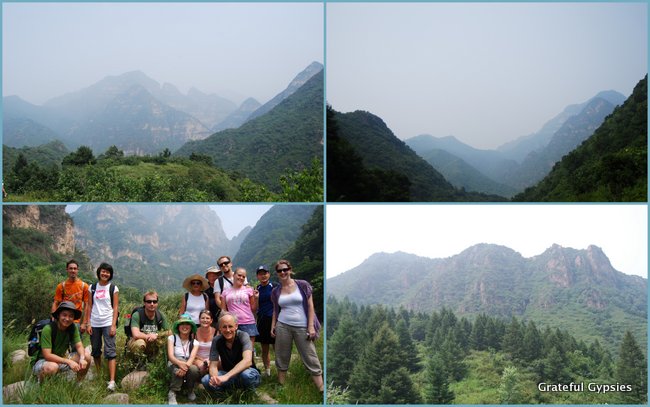 Nature and new friends on a summer hike.

Head to the Beach

Beijing really isn’t that far from the coast, so you can get to the beach (海滩 hǎitān) in a matter of hours. The fastest and easiest option is to head to either Beidaihe (北戴河 běidàihé) or Nandaihe (南戴河 nándàihé) in Hebei province. Once a popular retreat for Communist party leaders, this area makes for a nice weekend escape.

Don’t expect the nicest beaches in the world, but it’s fun to hang out here for a few days and much cheaper than flying to Thailand. While laying on the beach, drinking Yanjing beer, and having seafood BBQs are great, make sure you take at least one day to visit Shanhaiguan (山海关 shānhǎiguān). This is the part of the Great Wall (长城 chángchéng) that meets the sea and is a cool place to visit.

Camp on the Great Wall

Speaking of the Great Wall, why not just go have a camping (野营 yěyíng) trip on it? Many people are surprised to find out that this is actually allowed on a few sections. Pack up your tent, sleeping bag, and a little picnic, and head out for an adventure.

Based on my two experiences, I’d recommend the Gubeikou (古北口 gǔběikǒu) section. It’s a bit tricky to get out there, but all of the hard work pays off when you get to watch the sunset over one of the Seven Wonders of the World and then retreat to your tent in a watchtower to gaze at the stars. Check out some highlights in this video, which is one of my favorites I’ve made for the TL Chinese channel:

Lots of cities in China now host beer festivals (啤酒节 píjiǔ jié) in the summer months, but the biggest and most famous one is definitely in Qingdao. Home to China’s first beer – Tsingtao (the old Wade-Giles format of spelling Chinese characters is still used) – this seaside city in Shandong province gets wild for a few weeks every summer as thousands of people pack into tents to sing along to pop music, munch on kebabs, and drink absurd amounts of beer.

After attempting to swim through the literal sea of people on the beaches here, you’ll probably need a few beers anyway. Not many foreigners make it here, so it’s easy to make friends (who will most likely give you lots and lots of free beer). Just make sure you book an extra day to recover because the hangover (宿醉 sù zuì) will be brutal. For a more detailed account of the Qingdao Beer Festival, click here.

Summer music festivals (音乐节 yīnyuè jié) are all the rage in China now, so why not check one out? From folk to heavy metal to drum & bass, just about every style of music is represented in the Middle Kingdom these days.

Some festivals go on in the city, while others take place in more remote locations where camping is available. I’ve had some wild times going to Chinese music festivals over the past few years – from getting lost and sleeping in a KTV, to sharing french fries with an Aussie metal band, to getting wild near the Great Wall with some international DJs. You can see what that experience was like by checking out this video:

That does it for our look at summer fun in and around Beijing. As you can see, there’s plenty to do to keep you busy for a few months! Let’s finish up with a practice question: