When we last saw our 老外 heroes, they had just set up camp and were ready to rock and roll at the 2nd Annual In Music Festival.  Having met some super cool next door neighbors (隔壁邻居 – gé bì lín jū) at their campsite, our heroes embark on an epic weekend of music and fun.  What shenanigans will they get themselves into this time?  Read on to find out!

Not more than 5 minutes after setting up camp, our neighbors were already calling us over to share their ample supply of snacks (小吃 – xiǎo chī) and 啤酒.  Although my previous Chinese music festival experience had been incredibly different from my many American festival experiences, our overly hospitable neighbors showering us in beer struck a chord of familiarity.  As opposed to the Yi Xian Festival, whose audience was mostly composed of families that seemed to have gotten lost and accidentally drifted into a rock festival, the Zhang Bei Festival was full of energetic Chinese music fans who clearly came for the music, and, of course, the party (晚会 – wǎn huì).  This much was clear from the binge drinking that was going on at 1 o’clock in the afternoon.  I thank our neighbors for making me feel like I was in college at a football tailgate, or at a huge American festival, albeit for only a few minutes. 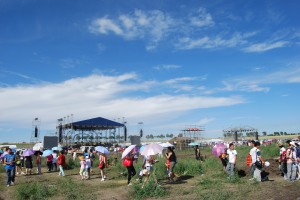 The main concert area... Not great planning, but what scenery!

After hanging out with our new 朋友 for a short while, we headed into the concert area to see some music and scope out the set-up.  Having been to and  worked at many festivals back home, Rachel and I were both a bit surprised to see three stages set up in a straight line, facing the same direction.  Even though this festival was in its second year, it was clear that there was still some work to be done in terms of the logistics.  Hopefully, by year three, they get the idea.  After a short laugh (笑 – xiào), we reminded ourselves that China is still very, very new at this, and we thanked our lucky stars that we were even able to enjoy such an event in the PRC.  I couldn’t help but imagine Mao himself enjoying this atmosphere by throwing up the rock hands to some raging heavy metal.

Speaking of heavy metal music (重金属音乐 – zhòng jīn shǔ yīn yuè), a majority of the bands at the InMusic Festival were just that.  Even though it was a stark contrast to the hippie-jam bands I had grown accustomed to at home, my roots in music lie with heavy metal, so I channeled my inner 8-year old and rocked the F out like I was listening to my first Metallica CD in 1996. 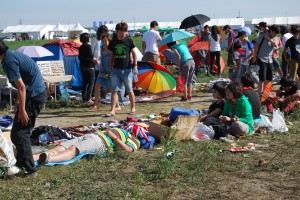 Taking a nap in between selling silly toys.

To take a break from the insane guitar solos and screaming vocals, we wandered around the concert grounds to see what was available for sale.  One notable difference between Chinese festivals and American festivals was the blatant presence of black-market activity within the concert area.  At American festivals (and I’m sure at European festivals, too), there is plenty of off-the-radar wheelings and dealings out in the campsite, but rarely is it present inside of the concert field.  Not the case at a Chinese festival.  People had blankets and stands set up all over the field, selling everything from shoes to glowsticks to silly masks to cowboy hats. 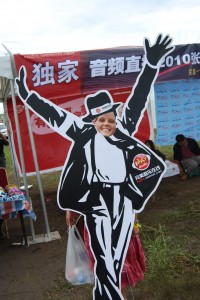 While perusing the selection of albums and magazines for sale, we couldn’t help but take advantage of a photo opp. with a cut out of Michael Jackson (迈克尔杰克逊 – Mài kè ěr jié kè xùn).  You know, it’s funny… I don’t remember ever hearing his name or his music once while I was here last year, but upon returning after his death, I swear that MJ is EVERYWHERE in China.  All of a sudden, he is the favorite artist of 80% of my students, there are MJ impersonators out in the bar areas every weekend, and his songs follow you everywhere you go. One thing is clear – the man may be gone, but his music will never die.

To no surprise, we were asked to pose for pictures on numerous occasions that day, as is the ritual when you travel in China outside of the big cities.  Of course, at an event such as this, there were also plenty of stealth photographers, and we often caught people with huge zoom in lenses snapping our pictures from a distance.  I didn’t mind so much, but seeing as how Rachel was sporting her bikini top for most of the weekend, she obviously wasn’t such a big fan.  This brings me to another funny point from the weekend…

As a foreigner living in China, you notice cultural differences (文化差异 – wén huà chā yì) on a daily basis.  At this particular festival, one such difference was very clear – while Rachel soaked up the sun in her bathing suit, our Chinese neighbors chose instead to hide under umbrellas, fully clothed.  In fact, they starred at her as if she were completely naked.  In the US, many people enjoy sun-bathing in order to tan, whereas in most Asian countries people prefer to hide from the sun in order to maintain a pale complexion.  It was a funny sight, indeed – Rachel laughing at our neighbors as they hid under umbrellas in pants and coats while they laughed at her as she laid out in the sun in nothing but her bathing suit.

Having arrived at the festival with nothing but instant noodles and soju (Korean rice wine), we spent a great deal of time at the tent of a local restaurant.  These folks were clearly savvy business people, as they had both Chinese food (中餐 – zhōng cān) and Western food (西餐 – xī cān) on hand to please the masses.  Extension cords hung across the tent to set up hot pot (火锅 – huǒ guō), while deep fryers were on hand cooking up chicken nuggets (鸡块 – jī kuài).  While enjoying a snack and a brew at this tent, we ran into an Australian metal band named Psycroptic.  I’m not sure if it was the long hair, their ripped jeans, or their Iron Maiden tank tops that gave them away, but either way, people just KNEW they were a band.  Three or four Chinese guys came over to their table to present a gift of 4-12 free beers, all the while speaking zero English (the band spoke zero Chinese).  Eventually, we joined them, as we just had to get their story.  Over a table full of french fries (炸薯条 – zhà shǔ tiáo) and beer, they told us about their first (and only) few days in China, and we all shared a few funny stories.  Later on, as their speaker-shattering metal music pumped out of the sound system while Chinese fans went ape-shit, I couldn’t help but laugh while thinking about our pleasant afternoon brunch of fried potatoes and crappy Chinese beer. 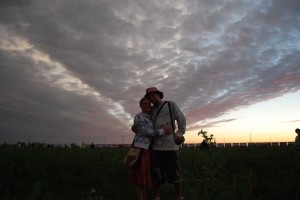 Beautiful people and a beautiful sunset.

While they were very nice guys (don’t let the metal band get-up fool you), we just couldn’t get into the hardcore music, so we opted for a stroll around the concert grounds.  Everywhere I looked, I saw people letting loose, dancing, and acting a fool, which was very refreshing to me.  In a culture that is so concerned with not losing face and looking stupid in front of peers, it was nice to see a huge group of people in China just let the old worries go in favor of celebrating the beauty of rock and roll.  Being a part of the Zhang Bei Festival once again reminded me of how rapidly things are changing in China.  A country that was practically under a rock just 50 years ago is now completely ready to rock, and one need look no further than the ever expanding music festival scene in China to see this change in action. 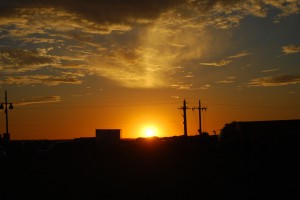 The sun sets on old China, as music festivals begin to conquer the summer weekends, and usher in the new China.