Zhang Bei Grasslands Music Festival (张北草原音乐节) Part One – Getting Out of the Smog and Into the Countryside Posted by sasha on Sep 6, 2010 in Culture, Uncategorized

After our ridiculously difficult journey to the Yi Xian Festival in May, you’d think we would have been turned off by the prospect of once again heading out into the middle of nowhere China for a music festival.  Well, you’d be wrong, because one late July weekend, we decided to do just that.  As is usually the case with concerts and music festivals here in China, little is done to advertise (做广告 – zuò guǎng gào) such events.  At least, if there is some sort of promotional campaign going on for live music (现场的音乐 – xiàn chǎng de yīn yuè) here, it somehow always manages to elude me.  Whereas back at home I am inundated with fliers, e-mails, posters, and facebook invites for shows on a daily basis, I have to actually seek out live music here in Beijing.  Of course, back at home there are tons of people working in music promotion, from huge companies like Live Nation to small, grass-roots marketing businesses.  Here in the Middle Kingdom, the live music business is still in its infancy, and as such there aren’t a great deal of promoters out there.  As I mentioned in my first post about festivals, another problem is that many people who do decide to put on a show or festival don’t exactly know what they’re doing to begin with.  That being said, having been in China for a total of about 1.5 years now, I can say that things are quickly improving when it comes to concerts and music festivals.

Despite the lack of proper promotion, we still managed to find out about the Zhang Bei Grasslands Music Festival (张北草原音乐节 – Zhāng běi cǎo yuán yīn yuè jié), also known as the InMusic Festival.  After doing my best to dig up some information on the festival online, I found out that this was to be the second year (第二年 – dì èr nián) of the festival.  Most of what was posted online about the festival was in Chinese, and my Chinese reading abilities are not great (不太好 – bù tài hǎo), so it took a while to translate the details.  I was able to figure out that there was going to be a direct (直达的 – zhí dá de) bus heading there from Beijing.  After the trials and tribulations of the Yi Xian trip, you could imagine my excitement.  I called the phone number (电话号码 – diàn huà hào mǎ) listed on the festival’s website, and confirmed this to be true (I had to hear it to believe it).  Although we would have loved to spend the entire weekend out there, work on Friday made that impossible.  As such, we woke up early on Saturday morning and headed to the long-distance bus station with our camping gear, hoping to catch the first bus at 9 a.m.

Of course, it wouldn’t be a weekend trip in China without some sort of travel trouble.  Despite having the name of the bus station written down in characters, as well as the phone number I had called the day before, our cab driver couldn’t find the place for the life of him.  We drove around in circles a few times, stopped to ask directions twice, and I even had my friend who was at the bus station put a worker on the phone to direct him.  What should have been a simple 10 minute ride ended up taking well over 30.  Needless to say, we missed the first bus…

We got on the next bus, and after every seat was full, we were on our way.

The bus ride should have been about two hours or so, but the roads were packed with city-dwellers heading out to the countryside (郊外 – jiāo wài) and, as such, took six instead.  At least it was a scenic ride, and it didn’t involve switching taxis multiple times as our last journey did. 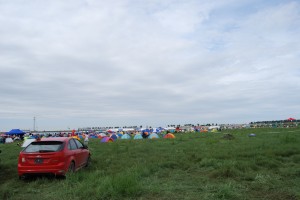 It was so nice to get out of the city… Not a high rise building in sight!

Upon arrival, we easily scored cheap tickets from a scalper (票贩子 – piào fàn zi) for 100 RMB per day.  At about $17 US for a full day of music and camping, that’s a pretty good deal.  Heading in to set up camp, I was immediately happy with our decision.  We were greeted with a big, open field (田 – tián) and a bright, blue sky (蓝天 – lán tiān).  Far out in the countryside, Zhang Bei is more or less free of the air pollution (空气污染 – kōng qì wū rǎn) that is such a big problem in Chinese cities.  It was a breath of fresh air to be out of the Beijing smog and to have a seemingly endless grassy field to run around in.  We set up our campsite and admired the setup of our neighbors, who had lawn chairs, a table, and a cooking stove.  Of course, back at home we would normally have all of the above and then some, but riding a public bus to a festival isn’t the best way to transport a luxury campsite.

Even with our minimalist setup, we were very excited about spending the weekend out of Beijing’s ring roads.  Stay tuned for the rest of the story about our adventure out in Zhang Bei.  In the meantime, enjoy this short video that I put together that shows some of the highlights of the weekend.