Summer Fun in and Around Beijing Posted by sasha on Aug 6, 2014 in Culture

August is upon is, which means the summer holiday for students is coming to a close. In just a few weeks, it’s back to school to hit the books and “good good study, day day up” (好好学习天天向上 – hǎo hào xué xí tiān tiān xiàng shàng) as they say in China. There’s still plenty of time left for some summer fun, though, so here are some ideas for how to spend your dwindling summer holiday:

Summer Fun in the City 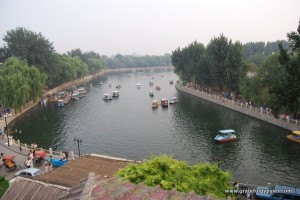 The winter months in Beijing are brutal, so people like to get out and enjoy the warm weather while it lasts. There are tons of things to do in the city that are more fun in the summer, so get out there and take advantage of it! Check out some of the parks and temples, play games in the street, or take a boat out on Houhai (后海 – hòu hǎi). Wander through the maze of hutongs and take in the local culture, such as men playing chess or elders practicing water calligraphy. In the evenings, it’s all about the music, as people congregate in local parks to boogie down.

Go For a Hike 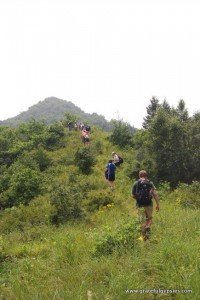 Hiking out in Yanqing county.

There are many great hiking opportunities in the Beijing area, as the city is actually surrounded by mountains. For many city-dwellers, a favorite pastime is heading out of the concrete jungle to hike/climb (爬山 – pá shān). While the heat of summer can be a bit intense, it’s usually cooler up in the mountains. If you’ve got the initiative and can surf the ‘net in Chinese, it’s possible to plan hiking trips on your own, as public buses will take you just about anywhere. However, if you’d rather just join in a group and have all of the tedious planning work taken care of, you’ve got lots of choices. There are hiking groups that head out on trips 3-4 times a week from the city in the summer months. Escaping the traffic jams and crowds for at least a few hours is great, and it’s good exercise as well. 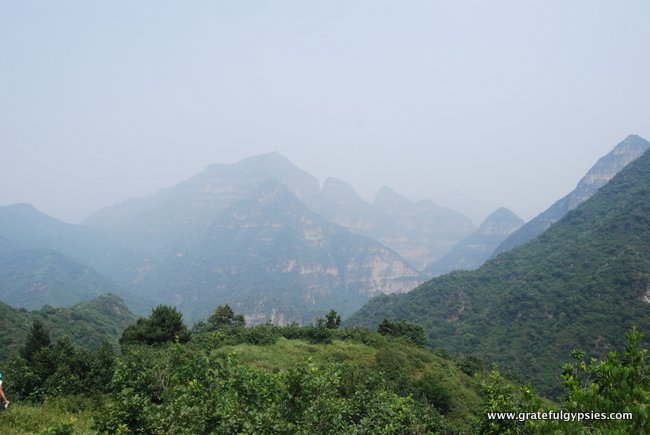 Head to the Beach 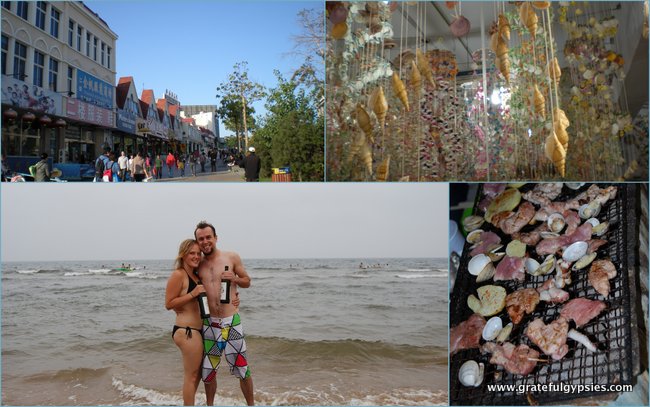 A collage of Beidaihe and Nandaihe.

Beijing really isn’t that far from the coast, so you can get to the beach (海滩 – hǎi tān) in a matter of hours. The fastest and easiest option is to head to either Beidaihe (北戴河 – běi dài hé) or Nandaihe (南戴河 – nán dài hé) in Hebei province. Once a popular retreat for Communist party leaders, this area makes for a nice weekend escape. Don’t expect the nicest beaches in the world, but it’s fun to hang out here for a few days and much cheaper than flying to Thailand. While laying on the beach, drinking Great Wall wine, and having seafood BBQs are great, make sure you take at least one day to visit Shanhaiguan (山海关 – shān hǎi guān), the part of the Great Wall that meets the sea. 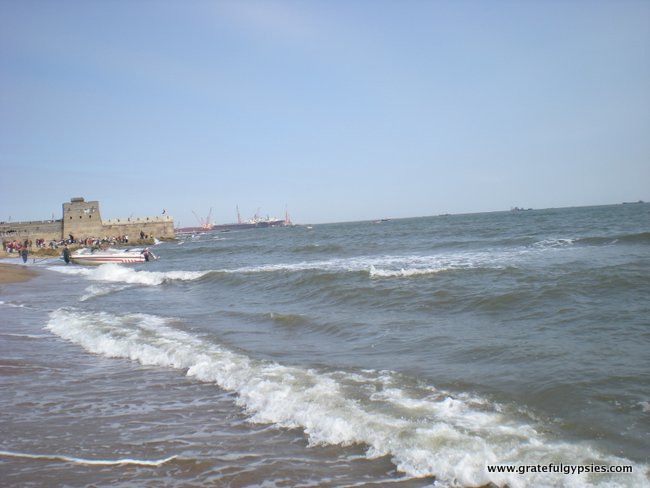 Where the Great Wall meets the sea.

Camp on the Great Wall 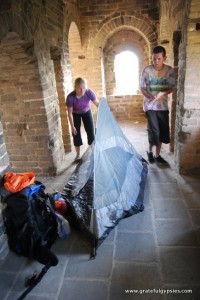 Setting up camp on the Wall.

Speaking of the Great Wall, why not just go have a camping trip on it? Many people are surprised to find out that this is actually allowed on a few sections. Pack up your tent, sleeping bag, and a little picnic, and head out for an adventure. Based on two experiences, I’d recommend the Gubeikou (古北口 – gǔ běi kǒu) section. It’s a bit tricky to get out there, but all of the hard work pays off when you get to watch the sunset over one of the Seven Wonders of the World and then retreat to your tent in a watchtower to gaze at the stars. 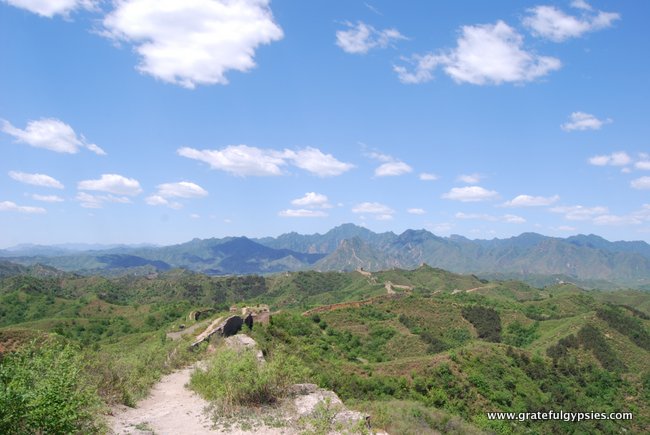 Not a bad way to wake up…

A video guide to camping on the wall. 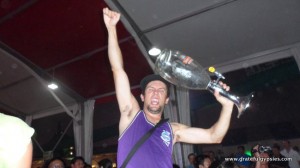 You’ll feel like a champion at the beer festival.

Lots of cities in China now host beer festivals (啤酒节 – pí jiǔ jié) in the summer months, but the biggest and most famous one is definitely in Qingdao. Home to China’s first beer – Tsingtao (the old Wade-Giles format of spelling Chinese characters is still used) – this seaside city in Shandong province gets wild for a few weeks every summer as thousands of people pack into tents to sing along to pop music, munch on kebabs, and drink absurd amounts of beer. After attempting to swim through the literal sea of people on the beaches here, you’ll probably need a few beers anyways. Not many foreigners make it here, so it’s easy to make friends (who will most likely give you lots and lots of free beer). Just make sure you book an extra day to recover, because the hangover will be brutal. For a more detailed account of the Qingdao Beer Festival, click here. 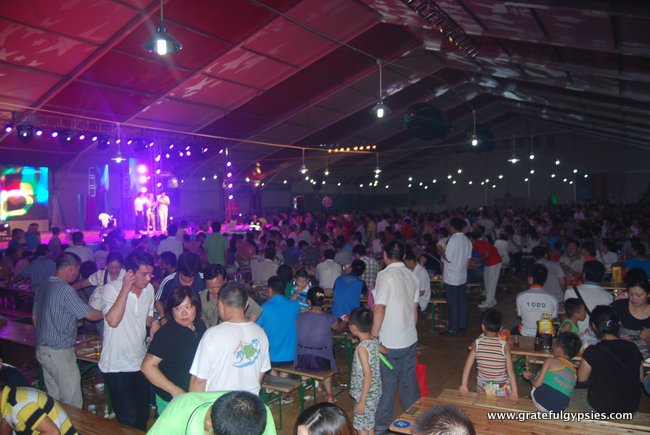 Get ready to say “Gan bei!” a lot at the beer fest… 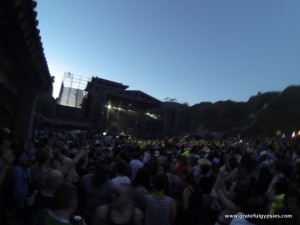 Summer music festivals are all the rage in China now, so why not check one out? From folk, to heavy metal, to drum & bass, just about every style of music is represented in the Middle Kingdom these days. Some festivals go on in the city, while others take place in more remote locations where camping is available. I’ve had some wild times going to Chinese music festivals over the past few years – from getting lost and sleeping in a KTV, to sharing french fries with an Aussie metal band, to getting wild near the Great Wall with some international DJs. While Chinese festivals have a long way to go, they can be a lot of fun – just don’t go expecting to see big names or Western-style organization. 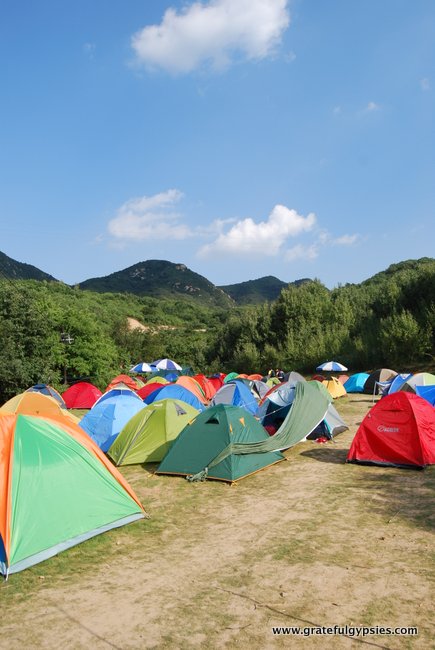 Camping out for a festy.

That should be enough to keep you busy for the rest of the summer. Don’t forget to keep learning a new Chinese word every day while you’re at it, because we all know that there’s nothing more fun than studying a language.