The Spring Festival Gala Posted by sasha on Jan 22, 2020 in Culture

There are a few things that are synonymous with the Chinese Spring Festival (春节 – chūn jié) – red couplets hanging on doors, dumplings boiling in a pot, firecrackers going off night and day, and families plopping down in front of the TV for 4+ hours. Indeed, the CCTV Spring Festival Gala is a huge part of the celebration. In this post I’ll introduce this marathon TV show to you just in time for the Year of the Rat (鼠年 – shǔ nián). 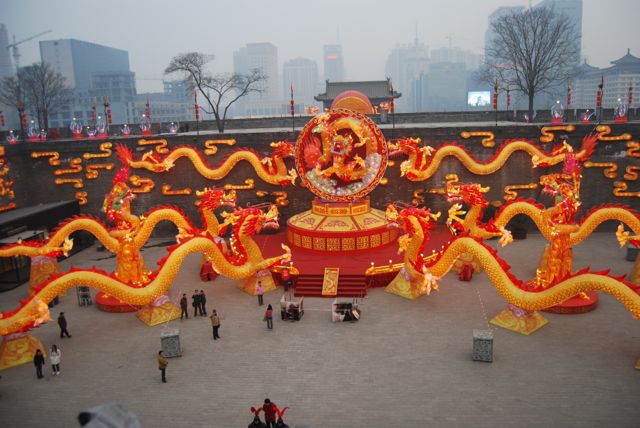 Lanterns are another big part of Spring Festival.

An Intro to the Gala

The CCTV Spring Festival Gala airs every year on the eve of the Chinese New Year. It has a pretty long name in Chinese. Here’s the whole thing:

That’s quite the mouthful, even for native speakers! That’s why most people just refer to it as “Chun Wan” (春晚 – chūn wǎn) for short.

It’s the most watched television show on the planet. Last year, over a billion people tuned in to watch – in China alone. That wasn’t a typo. Seriously – a BILLION people watched this show!

To put it into perspective, that’s more than ten times the amount of Americans who watched the Super Bowl.

The program is broadcast every year on the Lunar New Year’s Eve, and it is a variety show consisting of music, dance, comedy, drama, and more.

It has gone on every year since 1983, with four prominent hosts from CCTV who introduce the various acts and even perform in some of the sketches. Here’s what you can expect to see in any given year:

As the show goes on, viewers can call a hotline to cast their vote for their favorite sketch from the show. The top acts based on vote tallies then perform on the CCTV Lantern Gala, which airs on the Lantern Festival (元宵节 – yuán xiāo jié).

Criticism of the Gala

The vast popularity of the show mixed with the rising importance of social media in China has led to a lot of widespread criticism among Chinese netizens in recent years. After the show the past few years, many people jumped on Weibo (微博 – wēi bó) to express their disappointment in the line-up.

Back in 2016, the Gala was the laughing stock of the web because of its digital mascot. Named Kang Kang the Monkey, many people expressed their dislike for the show’s mascot. It was declared the “ugliest monkey” and compared to a traffic light.

Two years ago, there was a big controversy after a skit during the Gala featured a skit where an actress wore blackface and a prosthetic buttocks to represent an African woman.

Despite all of the negative comments online, the Chinese population will still tune in en-masse for the show when it airs this weekend, and it seems as if this is one Spring Festival tradition that will be around for a long time.

If you’ve got an extra four hours or so of free time, you can check out the entire show from 2019, which has even been posted to YouTube in a few parts:

Watching the CCTV Spring Festival Gala is definitely a great way to practice your Chinese listening skills! It’s also a fun way to learn more about the culture, as basically the entire country watches this show. I know I always enjoy talking to my students about the show after it airs, and it helps to have seen some of it myself.

There’s much more to the Spring Festival than a TV show. We have several posts about China’s most important holiday that you can check out:

Those posts should keep you busy for a while! Wherever in the world you’re celebrating the Chinese New Year, I just want to say…