Today is the most important holiday in China – the Spring Festival (春节 – chūn jié). Otherwise known as the Chinese New Year, it’s the start of a 15-day holiday full of interesting customs and traditions. According to the Chinese zodiac (生肖 – shēng xiào), we are now in the Year of the Pig (猪年 – zhū nián). In case you were wondering where the order of the animals in the zodiac comes from, there’s an interesting story behind that… 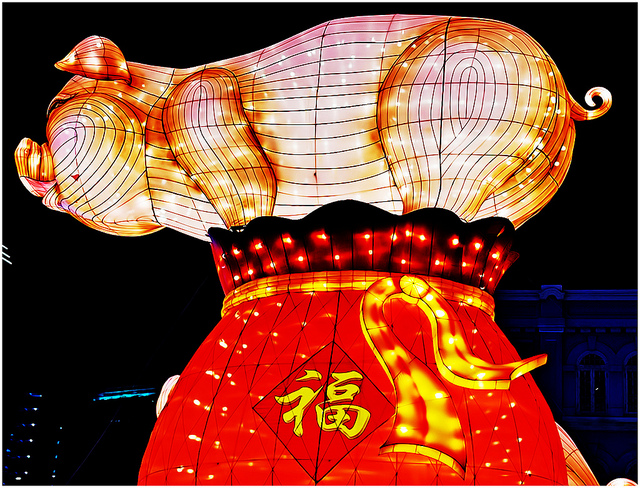 Image by Epic Fireworks from flickr.com. Attribution 2.0 Generic (CC BY 2.0)

As the legend goes, the gods decided to have a race to see which animal could cross a river first. There were twelve animals in the race of all different shapes and sizes. As it was the smallest in the group, many expected the rat to finish in last place. However, the clever rat jumped on the back of the ox at the beginning of the race. The ox raced ahead of the crowd, unaware of the rodent’s presence on its back. Just before crossing the finish line, the rat hopped off the ox’s back and stole the race!

As for the pig, it naturally got hungry and stopped for a snack halfway through the race. It then needed to take a nap, so by the time it got up all the other animals had crossed the finish line. As such, the lazy pig came in last place. Here’s the final order of the animals in the race, and thus their order in the Chinese zodiac:

There you have it, folks. Now you know why the Year of the Pig is the 12th and final year in the Chinese zodiac cycle!

Now let’s learn a little bit about the characteristics of those born in the Year of the Pig.

Characteristics of the Year of the Pig

People born in the Year of the Pig are known to be cool-headed. They are also known to be both compassionate and generous. Pigs rarely seek help, but are quick to offer it to others.

Pigs are known to be diligent. When they put their mind to something, they are able to achieve it. They have good taste, and tend to enjoy the finer things in life. That being said, they’re not snobby about it.

Unfortunately for pigs, they can also be quite naive and gullible. As a result, they’re often easily tricked or scammed. Since they love to eat and sleep, pigs can also come off as being a bit lazy.

As far as compatibility with the other animals goes, pigs are best paired with goats, rabbits, or tigers. They do not pair well with snakes or monkeys, however.

In case you were wondering, famous people born in the Year of the Pig include: Ernest Hemingway, Chiang Kai-shek, Lucille Ball, Magic Johnson, Hillary Clinton, Tupac Shakur, Arnold Schwarzenegger, and the Dalai Lama.

Chinese culture is obsessed with good and bad luck. It’s why people wear red for the Spring Festival and why no one gets a haircut in the first month of the New Year (hint – your uncle will die if you do so). Of course, there are things that are lucky and unlucky for each of the 12 animals in the Chinese zodiac.

For pigs, their lucky numbers are 2, 5 and 8, as well as any numbers containing those such as 18 or 25. Their unlucky numbers are 1, 3 and 9. Yellow, gray, brown and gold are the colors that will bring pigs good luck, while they’ll want to steer clear of red, blue and green.

Watch Chinese communities around the world celebrate the start of the Year of the Pig.

Wherever you’re celebrating today, and whatever animal you are on the Chinese zodiac, we’d like to wish you a very Happy Spring Festival (春节快乐 – chūn jié kuài lè)!

For more on the Spring Festival, be sure to go back and read some of our best posts on China’s most important holiday from the archives: