Can Danish hygge save the world? Posted by Bjørn A. Bojesen on Oct 16, 2015 in Uncategorized 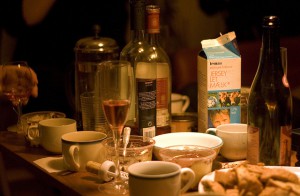 Did you know that a British college is teaching hygge? I’d highly recommend all fans of Danish culture to take a look at this article by the BBC! (Yes, it’s already been shared on our Facebook page.) The people interviewed really do their very best to explain the Danish ”core” concept of hygge:

Just like kærlighed (love), hygge is an atmosphere or vibe that is hard to define. It’s basically about having a good time and enjoying life in a low-key way. Maybe it’s you and a small group of venner sharing a cheap bottle of vin and playing a brætspil (board game) while the cold efterårsregn (autumn rain) is making people in the streets desperate for one-way tickets to any other country than Danmark… Or maybe it’s just you, a lit stearinlys (candle) and a god bog (good book). Add a strik(ke)trøje (woolly sweater) to go fully native! 😉

Could hygge possibly save the world? I’m sure many Danes would like to think that verden (the world) needs to calm down a little. Of course, that’s an easy thing to say when you live in verdens lykkeligste land (the world’s happiest country), as Denmark is often called – even by Oprah Winfrey. The world’s problemer maybe get a little surreal when you live in a velfærdsstat (Welfare State) with free uddannelse (education), free medical services and so on. In my own experience, though, people seem a lot happier in sunnier (but less safe) countries…

In 1864, Danish soldiers lost the southernmost parts of the realm to Germany (Prussia at the time). Nederlaget (the defeat) was really humiliating and many Danes felt bad. Denmark was shrinking, and it wasn’t the first time. (Skåne, the southernmost part of Sweden, had been a part of Denmark until 1658. And Norway had left the union with Denmark in 1814.) What to do?

The solution for many was to accept the defeat and change the to-do list. Instead of ”conquer a new territory” or ”train more soldiers” the tasks became ”educate yourself” and ”use your skills in your local community”. There’s a saying that is often linked to this time: Hvad udad tabes, skal indad vindes. (What is lost on the outside, shall be won on the inside.) Which really is another way of saying: Hyg dig! 🙂