150 Years of Fries in the Netherlands Posted by Karoly Molina on Oct 1, 2019 in Culture

This week marked 150 years of the delicious and crispy fries in the Netherlands. 150 years ago, a kermis or fair in Breda introduced the Dutch to fries and life was never the same! 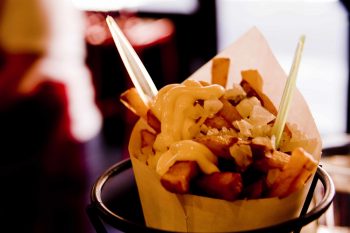 Photo taken by Charleston’s TheDigitel found on Flickr.com with license CC BY 2.0

There is an ongoing debate in the Netherlands as to what is the right name for fries. Boven de rivieren or the north part of the country calls this delicious snack patat while onder de rivieren or the south and parts of Belgium call it  friet or frieten (plural). Many many years ago, the Dutch used to call this snack patatfriet. Patat referred to the potato and friet described that it was fried. Eventually, people tried to shorten the word. In an interview with Linda.nl, a university professor from Amsterdam University specialised in language explained that the reason for the split was that in Limburg dialect, patat krijgen (literally getting a potato) means getting whacked in the head. Hence, the south opted for friet and the north opted for keeping just the first part of the word: patat. In Belgium, patat refers to a potato and using friet made more sense.

The video below explains more of the history of this dish and the patat/friet debate.

The ongoing discussion of whether to call it patat or friet has certainly reached Twitter, and this past Monday, it was a trending topic. You can follow the conversation by checking #teampatat and #teamfriet.

How do the Dutch eat fries?

Regardless of what you choose to call fries, eating them is an experience into itself. The most common way to eat patat is to buy a cone with your choice of sauce. For a good portion of the country, frietesaus or mayonaise is the way to go. The cone almost always comes accompanied by a cute little fork to help you reach the frieten inside.

If you stop by your closest snackbar or friture. You can order the friet/patat speciaal which is served with mayonaise, curry ketchup and chopped onion. Satésaus, which is a type of peanut sauce, is also another popular choice If you like spicy, samurai is the sauce of choice. 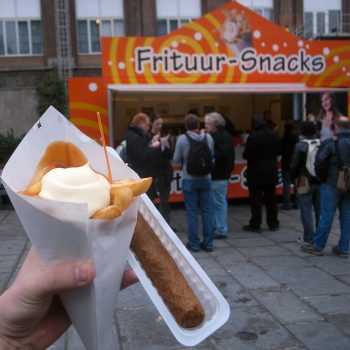 Photo taken by Jon Aslund found on Flickr.com with license CC BY 2.0

Frites or patat are normally served as side dishes for mussels or mosselen, which are very popular in both Belgium and the Netherlands. In Limburg, frieten often accompany zuurvlees which is a regional stew made with horse meat. If you are a fan of the Dutch fried snacks, the patat make a nice addition with your bitterballen, kroketten and frikandel.

You can, of course, make patat a meal of its own. The famous kapsalon is a tray with frieten topped with shawarma meat, and cheese. The tray is put in an oven to melt the cheese and then topped with lettuce, garlic sauce and sambal sauce. This interesting dish was created in Rotterdam in 2003 when the owner of a kapsalon or hairdresser went by his local kebab place and asked for this particular concoction. This became his regular order and the restaurant named it kapsalon in honor of its inventor. Every year, there is a contest in Rotterdam for the best kapsalon in the city.

A snackbar in Amsterdam recently claimed that the kapsalon is a typisch Amsterdamse snack which caused a lot of fury from Rotterdam. The video below tells more.

Are you team patat or team friet? Have you ever tried the famous Dutch kapsalon?