August: A Stressful Month For Students In The Netherlands Posted by Sten on Aug 19, 2019 in Culture, Dutch Vocabulary, News

It’s August. A month of sun and relaxation. It is a real komkommertijd. But for starting college studenten (students), it is quite a hectic time. They are often moving away from home, to another stad (city), since the next academic year is starting on September 1. De aankomende studenten gaan op kamers! 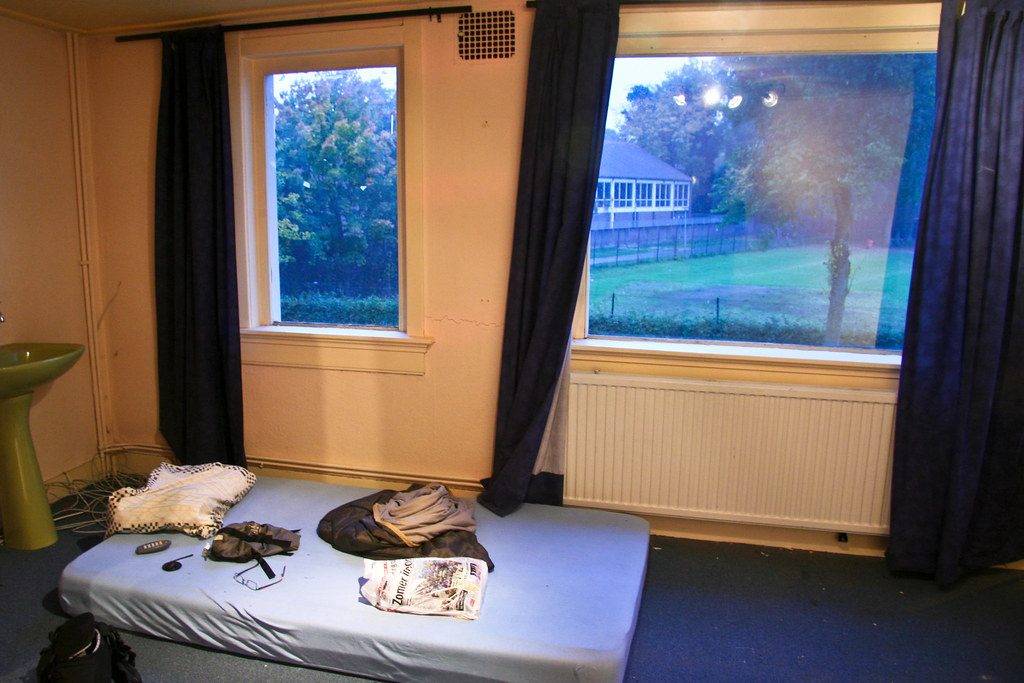 An (almost) empty studentenkamer. Notice the included wasbak at the left (Image by Guy Sie at Flickr.com under license CC BY SA 2.0)

Op kamers gaan (“to go on rooms”) means that you move into a kamer (room) in a studentenhuis (student house). Most studenten choose such a kamer instead of their own place because it is goedkoper (cheaper) and gezelliger (more… “fun” – read the post about gezellig! 🙂). These studentenhuizen often have separate studentenkamers (student rooms) and have gedeelde badkamers (shared bathrooms) and gedeelde keukens (shared kitchens). Sometimes, you will also find huizen with kamers that have a kitchen and/or bathroom built-in. While that is pretty rare, many rooms have at least a wasbak (sink) for fresh water.

In the studentensteden (student cities) of the Netherlands, people live quite densely together. Demand is high, which means that prices are high for pretty small rooms. In fact, many cities have a tekort (shortage) of available kamers (rooms)! It is a real struggle for studenten to get a kamer these days.

You can search a room at websites like kamernet.nl, university-supported housing websites (such as maastrichthousing.com) or realtor websites, though often not for free. There are also many Facebook groups for each stad that advertise kamers. Furthermore, outgoing students often offer their kamer via social media or contacts, since they also leave around the same time as new students come in.

If you don’t want the hassle of a studentenkamer, getting an apartement (apartment) or studio (studio – one room with kitchen and a bathroom, all just for you) is also an option. Though that’s of course going to cost you. Depending on where you look, you may quickly surpass 1000 euros a month. And sometimes huisbazen (landlords) of apartments and studios only allow or prefer couples or working singles, to specifically avoid studenten.

So. A kamer frees up in a studentenhuis because a student left. Who decides who gets this precious real estate?

Sometimes, the huisbaas (landlord) simply manages who gets a kamer. On first-come-first-serve basis, or simply personal preference. A lottery or ranking system might even be involved.

However, it often happens that the studenten that still live in the studentenhuis get to have this job and choose among themselves who joins their huis. So how do they choose?

During a kijkavond, upcoming studenten can have a look at the huis and the kamer. But really, it is for the residents to have a look at the potential new huisgenoten (housemates). The verb for going to such a kijkavond is hospiteren. The video above shows some tips on how to get in, and there are many more. As you can see: the student life in studentenhuizen often consists of gezellige avonden (fun evenings) with lekker eten (good food) and lekker drinken (good drinks). Especially the drinking part is often emphasized.

After you had a gesprek (talk) with the huisbewoners (it really is like an interview), you may have some time to talk to other huisbewoners and have a beer. After a day or two, or even on the same night, you will hear their reply. Did you get the kamer? Gefeliciteerd!

Are you looking for a kamer right now, and if so, where? Do you have housing situations like this in your country, or did you have a personal experience with this? Let me know in the comments below!