Dam Square, Amsterdam Posted by heather on Aug 2, 2011 in Uncategorized 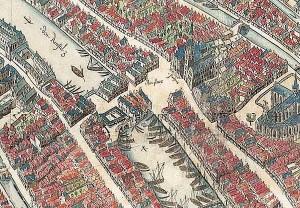 The Dam in 1544, as an actual dam in the river Amstel. View faces roughly southwest. On the right hand side are the old town hall and the Nieuwe Kerk. (Image from Wikipedia Commons)

As you exit Amsterdam Centraal station and are smacked in the face with the sights, sounds and smells of busyness you will probably find yourself following the natural flow of people heading off into the city of Amsterdam.  If you manage to navigate the bikes, tram tracks and traffic intersection successfully, then you will quite likely find yourself heading down Damrak.  What once was the city’s busiest canal has since been filled in and developed into a hectic and touristy shopping street.

If you continue down this street, you will find yourself in a big square (perhaps even standing next to a street performer or at least a pigeon or two) with Madame Tussauds and the Royal Palace on two sides.  This is Dam Square.

The history behind Dam Square is quite interesting and here are some things you might not have known about it:

The Square also has some negative history, perhaps the most well known is the Dam Square Shooting.  On May 7th 1945, large numbers of people were in the Square waiting for the Canadian liberators to arrive in the city.  Germany had surrendered two days prior but the city was still filled with many German soldiers.  In the Grote Club, members of the Kriegsmarine were watching the crowd.  They started shooting into the crowds, killing just over 20 people and injuring around 120 more.  You can view some footage of the incident in Amsterdam’s online city archive.