Dutch Commercials: Amstel and Coolblue Posted by Karoly Molina on Aug 26, 2020 in Culture

Recently, there have been a few commercials that have caught my attention because they are a quick way to learn a few new words. In this post, I want to focus on Amstel’s beer commercial titled Proostnamen and the series of commercials from the online electronic store Coolblue. 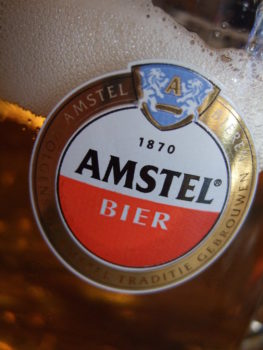 Photo taken by James Cridland found on Flickr.com with license CC BY 2.0

Amstel has been around since 1870 when two good friends, Charles de Pesters and Johannes van Marwijk Kooy began set on a quest to create the best beer. They started the brewery or brouwerij near the Amstel river, and were quickly selling the beer in Amsterdam. As the Nederlandse Spoorwegen or NS expanded, so did Amstel’s distribution, and eventually, the beer was also sold outside the Netherlands. In 1968, Heineken bought Amstel and is one of 165 breweries that the big Dutch brand owns. Nowadays, about 12.5 million hectoliters of Amstel beer are sold in 110 different countries.

Amstel Beer was founded on the idea of vriendschap or friendship and for the last few years, this has been the theme of the brand’s marketing campaign. Their current commercial on TV celebrates one aspect of friendship: giving nicknames or bijnamen when drinking beer together. Below is the video.

The campaign calls this commercial Proostnamen. Proost means ‘cheers.’ These are basically names for when you toast with your friends in good old friendly banter or plagen. Below I want to explore some of these nicknames.

The first nickname is Brulaap and it translate to something like howling monkey. Van Dale also defines it as a squealer.

Another nickname is prutser which means someone who can’t do anything.

Sukkel is someone who is dumb or not handy.

Snotneus literally means a stuffy nose, but it’s used as someone who is very young and doesn’t know anything.

Mafkees is a silly or foolish person.

My favorite, the last one, is uitslovers which means show offs.

The bantering in the commercial is meant to be friendly, and not in any way in a form of bullying or pesten.

Coolblue is a Dutch e-commerce company that sells electronics. It was founded in 1999 and is kind of like an online Best Buy. There are a few physical stores or winkels in the Netherlands, but the majority of their sales are online. Cool Blue provides service in the Netherlands, Belgium and Germany and has very competitive prices.

The most recent campaign from Cool Blue is full of play on words to get their message across. Take, for example, the commercial below for washing machines. In the commercial, they are telling you the service they offer. If you buy a new washing machine or wasmachine, because you ran out of clean underwear, they deliver it when it is most convenient giving you a 1-hour time frame and not interfering with your vacation. Their very strong delivery personnel carry it and install it and leave until it is installed properly. They also take the old washing machine.

But of course, saying all these things just plainly would be less fun and attractive.  The Coolblue commercials pull you in with their play on words and imagines as a type of deciphering game. Below are some of the combinations they make:

Every time they say net to mean just or so, they show a ping pong net. They also show a stapler with staples or nietjes for niet as in does not. For kies as in choose, they show a quiche and for jij wild as in you want, they show a bunch of wild pigs. In the end, they close off their service promise with netjes or nice or cool with an imagine of two small fishing nets…also called netjes. Literally netjes means properly as in he is dressed properly or behaves properly, but in this context I think it translates better as an emotive ‘nice!’ when someone told you something you approve of.

Which other funny combination did you find in the Coolblue commercial? What other nicknames would you add to the Amstel one?