Geld (money). It is the lifeblood of our economieën (economies) and we need it in our dagelijks leven (daily life) for everything from boodschappen (groceries) to treinkaartjes (train tickets) to buying a rijbewijs (driver’s license) once you get tired of all the vertragingen (delays) of the Dutch trains. But where did Dutch money begin? And what does the US dollar have to do with this? Here’s a look at the Dutch gulden!

Click here for other posts in the series on Dutch Money.

The Birth of the Gulden 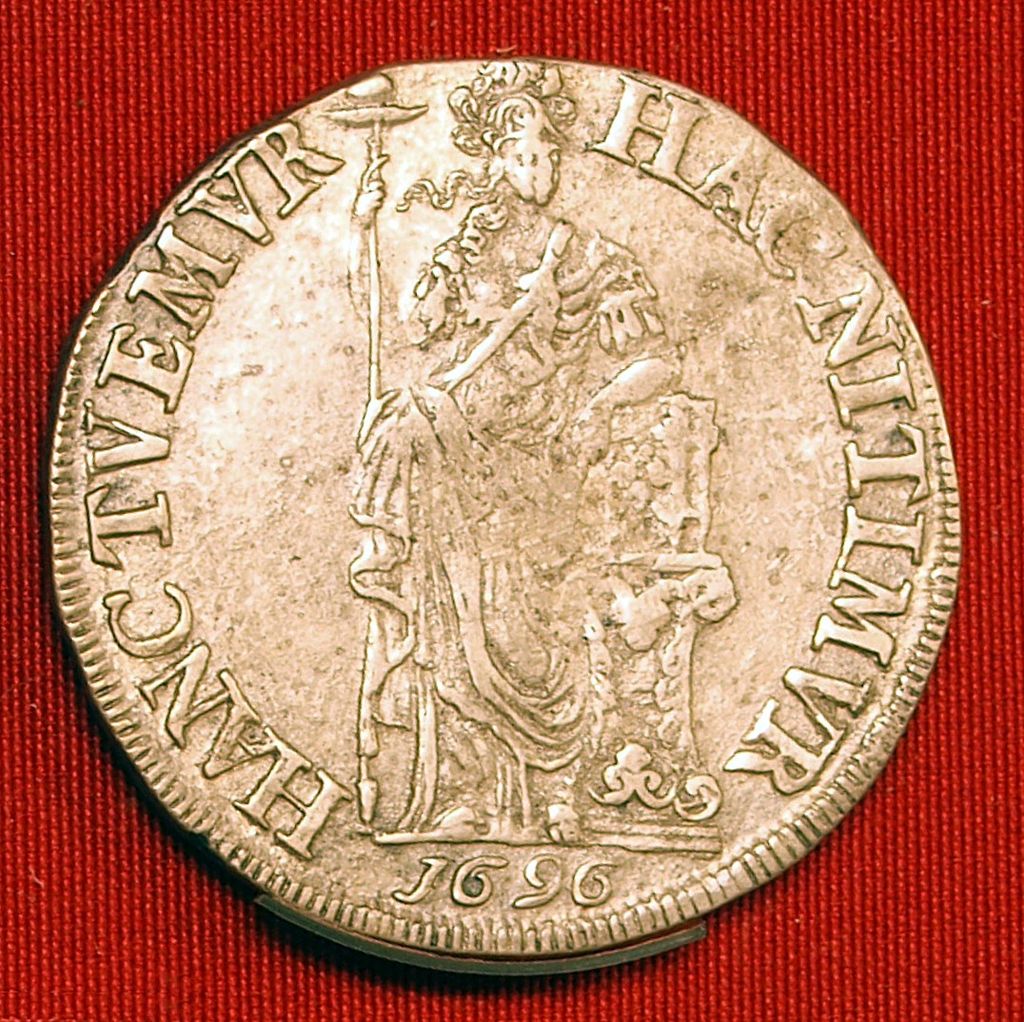 Depiction of the Dutch Maagd met een speer on a Dutch coin from 1694
(Image by AlfvanBeem at Commons.wikimedia.org under license CC0).

The Netherlands uses the European munteenheid (currency unit), the euro (euro). Before its introduction in January 2002, the Dutch used the gulden (guilder). The gulden had been in use for many centuries, actually. It was introduced in the Middeleeuwen (Middle Ages), so the replacement for the euro was a pretty big deal! In fact, the Koninklijke Nederlandse Munt (Royal Dutch Mint) made a real silver and gold 1 gulden to commemorate this munteenheid. You can still buy it here!

The name gulden refers to the fiorino d’oro (golden florentine), the florentines introduced as a munteenheid in Florence, Italy already in 1252. It spread throughout Europe quickly, and many regions began introducing their own versions of this coin, including the Dutch. The name gulden refers to the “golden” part in the name fiorino d’oro. So really, the money’s name is just Old Dutch for “golden”.

From 1526 onwards, the Dutch gewesten (provinces at the time) are using the Carolusgulden (Charles Guilder), after Charlemagne. It can be divided into 20 stuivers (pennies). So since then, there was a clearly divisible munteenheid in the Dutch lands. Around 1600, after the Tachtigjarige Oorlog (Eighty Years’ War), the provinces each have the muntrecht (coinage rights), and so can create their own munten. Some gewesten create larger silver pieces worth 28 stuivers. These are also known as achtentwintigstuiverstuk (twenty eight-penny piece) or florijn (florin).

At the end of the 17th century, the entire country goes back to the 20 stuivers for a gulden as standard coin. This 1694 gulden depicts the Dutch maagd met een speer (maiden with a spear). A gulden or even a euro is sometimes still referred to as a piek (pike, point), which refers to the spear on this munt.

In 1816, when the Dutch monarchy was just introduced, the gulden got a new division. It was now no longer divided into 20 stuivers, but 100 centen (cents), likening it to the most current currencies we have around the world. This gulden also introduced the head of the current vorst (monarch) onto the heads-side of the munt. See what that looked like in 1821 here, with Willem I.

A fun fact about these coins: with each troonwisseling (change of the crown), the vorst looks in the other direction than their predecessor. It was seen as onwaardig (unworthy) if the vorsten were to look at each others’ necks! Very thoughtful.

While all these coins were real silver, nikkel (nickel) was used since 1967, since the zilverprijzen (silver prices) went too high.

And then in 2002, the euro was introduced, marking the end of an era!

The gulden in the Dutch language

Because of how long the gulden was in circulation, many words that refer to money are still in use, even today. Though mostly older people are still accustomed to using these terms, they are fading away. Many are unique to the gulden, though some can be applied to the euro as well.

Until 1816, there were many terms for all the different divisions of a gulden. I won’t go into those here, since almost none of them are still in use.

After 1816, the following names were introduced:

What’s striking about the Dutch gulden is that it is divided into quarters, so 2.5 centen and 2.5 gulden are real coins.

The sign for the gulden is the ƒ or fl., which refers to its origin, the florijn. Pretty neat, right?

Also, the word rijksdaalder may look familiar to you. It is also known as a riks, which comes from the English term for this daalder, the Rixdollar.

The daalder was the little brother of the rijksdaalder, and was first minted in the 1500s in Bohemia, in the Joachimsthal. Coming from this thal (valley), it was known as a thaler (“valleyer”), which translated into Dutch as a daalder. Through its worldwide leading role in 17th century trade and through the Dutch colonies in America, the Dutch daalder made its rounds in world trade. And this is where the American dollar got its name! The mighty US currency got its name from a little Dutch 16th century coin. How about that!

The gulden is now gone, and was replaced by the euro in 2002. However, if you want to see the design of the Dutch banknotes and coins and reminisce a little, there is a great website that shows all of it. Click here!

Have you used guldens before? What do you think about these coins compared to the euro? How’s your currency? Let me know in the comments below!