The Gouden Eeuw: A Golden Time for the Dutch Posted by Sten on Jan 28, 2018 in Culture, Dutch Language

The 17th century does not spring to mind for many as a very prosperous and important time for the average person in the 21st century. After all, we now have the internet, electricity, good health care and we can travel all over the world in a matter of days. Despite that, the Dutch refer to the 17th century as their Gouden Eeuw (Golden Age). So what happened back then that made it so golden? 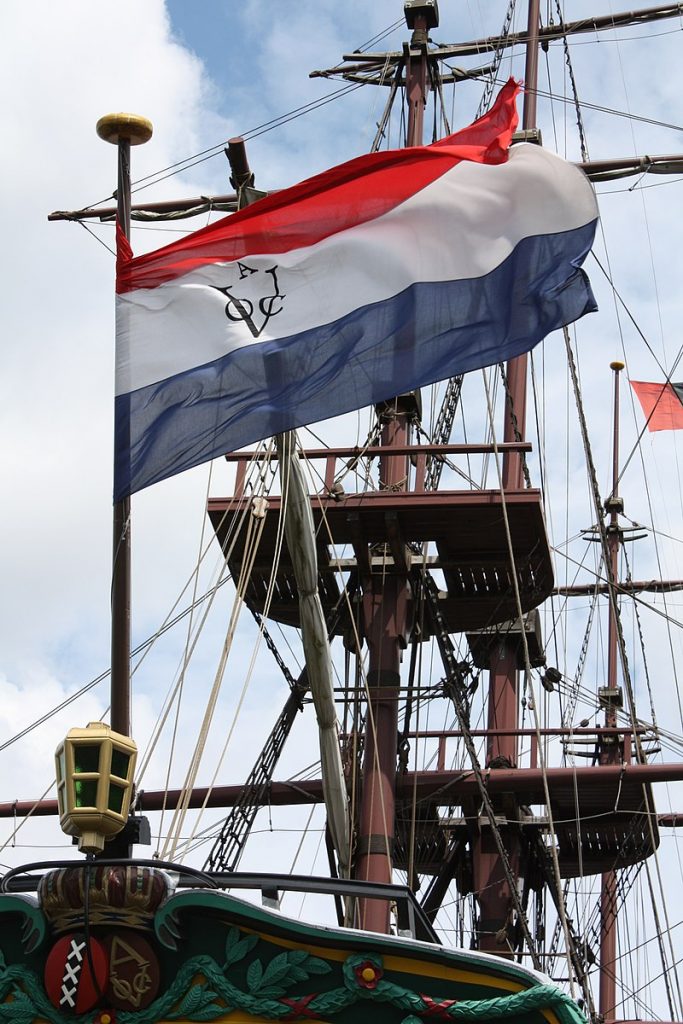 A ship with a VOC flag on it. The A above the VOC logo means that the ship is from Amsterdam. (Image by McKarri at Commons.wikimedia.org under license CC BY SA 3.0)

You may have heard of the VOC before. It is short for the Vereenigde Oostindische Compagnie (in modern Dutch: Verenigde Oost-Indische Compagnie (Dutch East India Company). It is considered the first true transnational corporation in the world. It also became the first company that was publicly traded and had aandeelhouders (shareholders). The main area of business was Asia. Kaap de Goede Hoop (Cape of Good Hope) was a frequent stop and refill point, and that left its traces. It explains why Afrikaans, the language spoken in South Africa, is related to Dutch so much.

The VOC was thriving, and brought a lot of wealth to the Netherlands with its specerijenhandel (spice trade). In fact, it is known to be the most profitable company ever. Apart from the fact that it was frequently given monopoly rights for spice trade in Asia, rules on fair competition and international trade rules were rudimentary or simply non-existent at the time, so the VOC could basically do what it wanted to.

And so the world’s oceans were the wild west of the 17th century. The VOC got more and more competition from companies from other countries. The worth of their cargo also became known, of course, and so the VOC employed its own army, with about 10,000 soldiers in 1700 – half of its staff.

So, the VOC and its international trade was a large reason why the Dutch became a rich nation in the 17th century. But there is more. 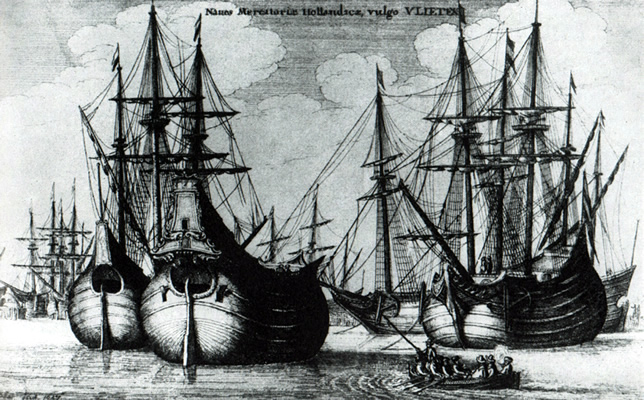 Fluitschepen (Flute ships), specifically developed by the Dutch for the Moedernegotie.

The Moedernegotie (Mother of all trades) was the most important source of income for the Dutch, even before the Gouden Eeuw. It consisted of the trade with countries around the Oostzee (Baltic Sea) in goods such as graan (grain) and hout (wood) – goederen (goods) that other traders did not invest in. They rather traded in luxury items. Due to this activity, Amsterdam – and the Netherlands in general – quickly grew to become the stapelplaats (staple) of Europe. You can still see the effect of this in Amsterdam today. The many pakhuizen (warehouses) in Amsterdam still used as places of business or housing are remnants of this time.

The term moedernegotie actually comes from the Gouden Eeuw, even though that trade had been going on for a lot longer than the 17th century. The reason is that the Gouden Eeuw spawned a lot of new areas of business for the Dutch Republic. With the term “Mother of all trades”, the Dutch state wanted to emphasize that the trade with the Baltic area was still the most important trade for the nation. 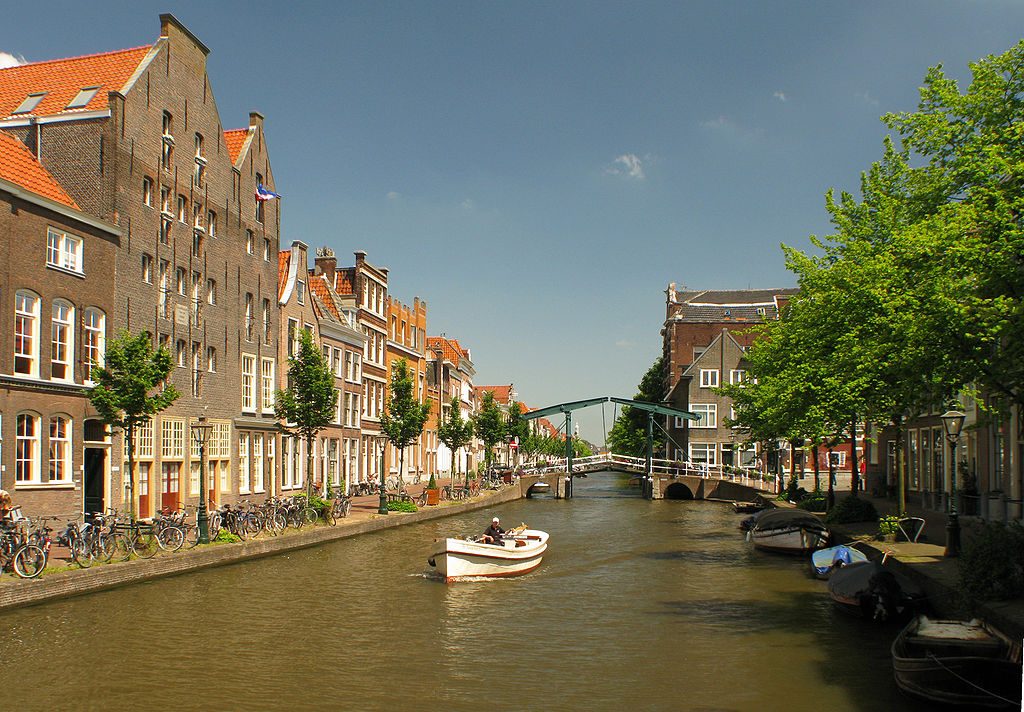 Koopmanshuizen (Trader’s houses) in Leiden (Image by Erik Zachte at Commons.wikimedia.org under license CC BY SA 3.0)

Despite the Tachtigjarige Oorlog (Eighty Years’ War), fought (from the Dutch perspective) between the Dutch and the Spanish from 1568-1648, the 17th century was a thriving time. The twaalfjarig bestand (twelve year truce), from 1609-1621, was a negotiated truce between the Spanish and the Dutch, which greatly helped the Dutch develop their economy and political situation further.

After 1648, the end of both the Dertigjarige Oorlog (Thirty Years’ War) and the Tachtigjarige Oorlog, the Dutch decided to move forward in the political form of a Republiek (Republic) with certain economic vrijheden (freedoms) for its citizens and a very open beleid (policy) towards buitenlanders (foreigners) and minderheden (minorities). Instead of actively persecuting them, they would allow andersdenkenden (dissidents) to live in the Netherlands. The Dutch also had a financial market where people could get loans to start a business and develop ideas. This gave the Dutch an important advantage over other countries at the time. Also, due to the small size of the Netherlands, a lot of the kennis (knowledge) and goederen were concentrated in a small area. After all, the important cities of the Netherlands at the time – Amsterdam, Leiden, ‘s-Gravenhage (The Hague) and Rotterdam – are very close together. And they grew. A lot. 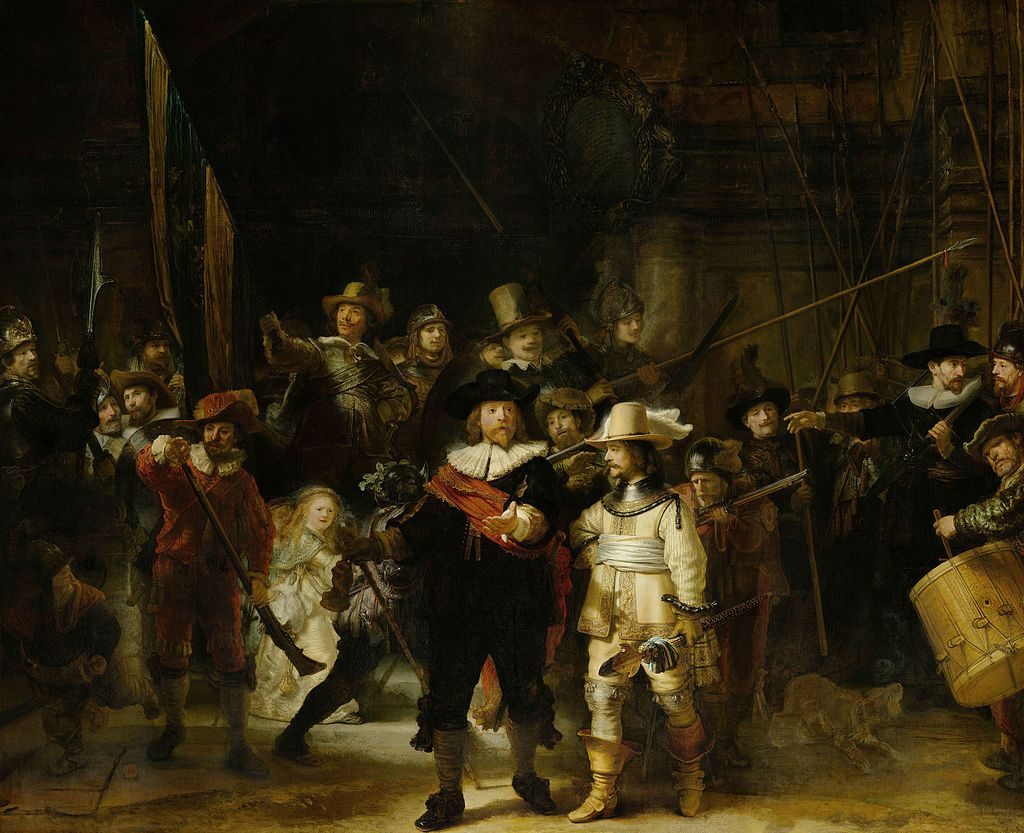 De Nachtwacht (The Nightwatch), Rembrandt’s world famous meesterwerk (masterpiece) from 1642, which is on display in the Rijksmuseum in Amsterdam. I will refrain from making any Game of Thrones jokes here.

Another booming sector in the Gouden Eeuw was kunst (art). Artists like Vermeer, Jan Steen, Frans Hals and Rembrandt were active in that century. De Nachtwacht is one of the most famous Dutch paintings by Rembrandt. It displays an important part of the Dutch Gouden Eeuw as well. Back in those days, schilderen (painting) was not seen as the artsy craft it is now. It was a regular beroep (job). After all, photographs could not be made, and so the only way to perpetuate yourself was through a schilderij (painting). Nonetheless, commissioning a painter was not that cheap. While Rembrandt never became a rich man, his Nachtwacht is now one of the most important Dutch schilderijen, period. It is a Schutterstuk, which depicts militia or city guards, quite common for the time. They were often rich handelaren (traders), who had money to pay for a schilderij (painting) like this. 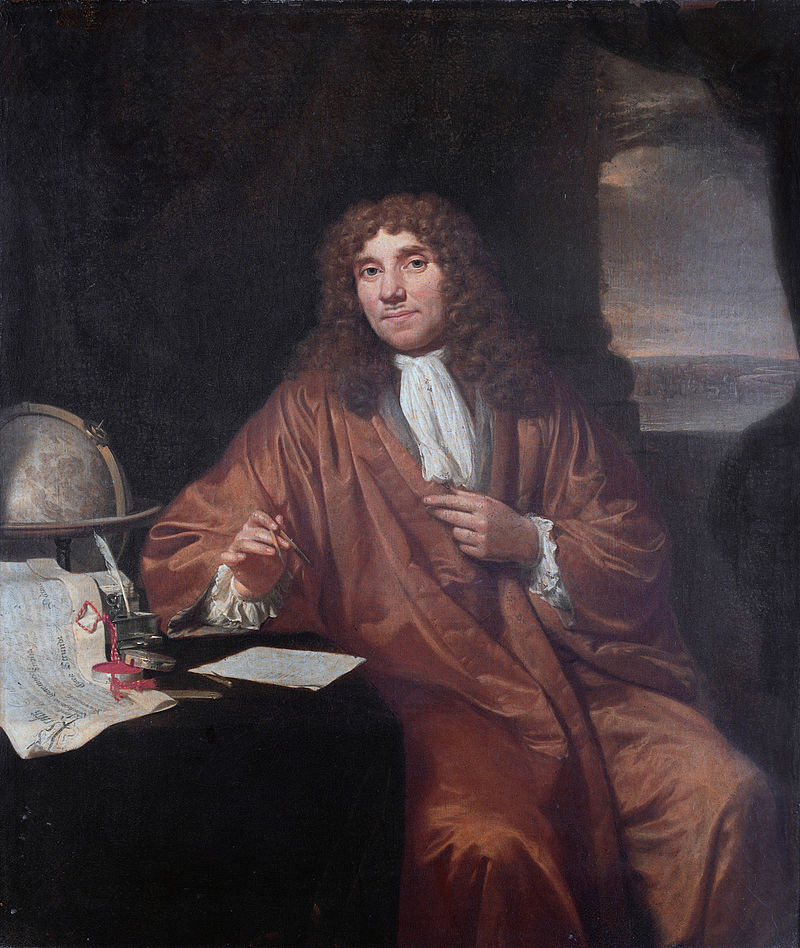 Important thinkers and people in the wetenschap (science) also came to and from the Netherlands. René Descartes, for example lived in the Netherlands from 1628 to 1649, during which he published his most important works.

Other important geleerden (scientists) from the time were Hugo de Groot (Hugo Grotius), who laid the fundament for the Law of the Sea and international trade laws.

Galileo found with his telescoop (telescope) in 1610 the first moons of Jupiter. A telescope that was based on a Dutch invention, the Hollandse Kijker (Dutch oculars), which was invented in Middelburg in 1609.

Another important wetenschapper (scientist) is Antoni van Leeuwenhoek, who was a pioneering microbiologist, who discovered rode bloedcellen (red blood cells) in 1674, for example. 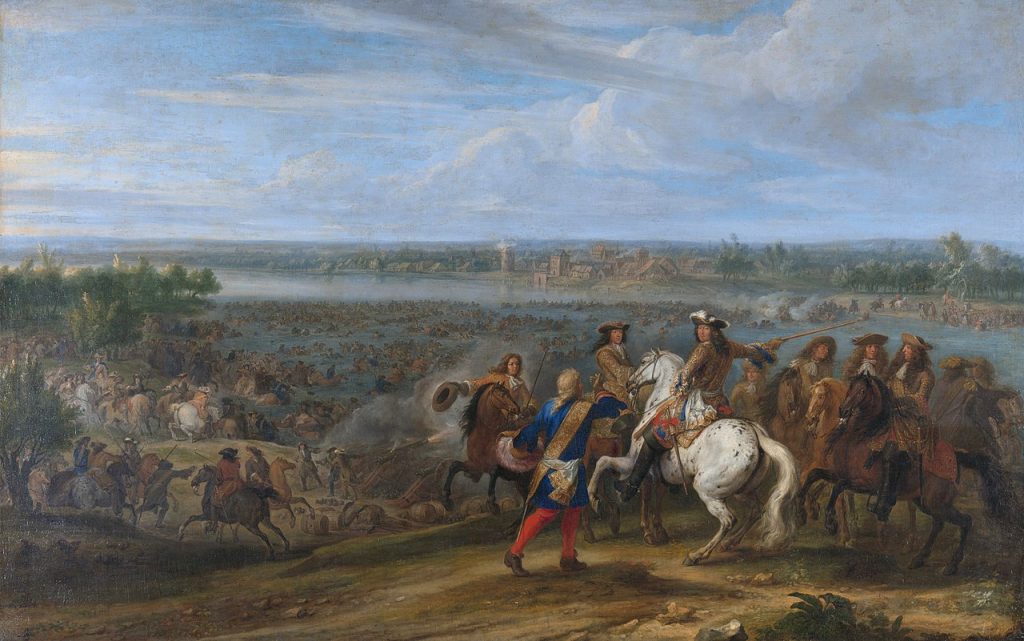 The Dutch Republic was prosperous, had a lot of diversity, attracted smart minds and was a great deal internationally. So then why did this Gouden Eeuw end?

Often seen as the end of the Gouden Eeuw was 1672, also known in the Netherlands as the Rampjaar (Year of Disaster). Why was it so rampzalig (disastrous)?

During that year, and in the years to come, it became clear that Frankrijk (France) and Engeland (England) grew to become two other wereldmachten (world powers) to reckon with. To compete, the Dutch had to participate in an expensive wapenwedloop (arms race), which drained the country’s finances.

A famous phrase from 1672: “het volk redeloos, de regering radeloos en het land reddeloos” (the people senseless, the government clueless and the country hopeless). It was the year in which the Dutch were attacked by the French, the English and the bisdommen (bishoprics) of Munster and Cologne.

1672 was also the year in which the spanningen (tensions) between the staatsgezinden (state-minded people) and the prinsgezinden (prince-minded people) came to their high point. Some wanted a society based more on a republic, whereas others rather wanted a monarchy. In 1672, prince William II died, and a new conflict over how the government was to be run started. All during a time of war against three armies the Dutch were unfit to withstand. A lot of people panicked, and it led to a crisis and economic shock. A lot of shops closed, and it was quite a hit economically.

Furthermore, the Dutch had a relatively small thuismarkt (domestic market), and depended a lot for its prosperity on vrije handel (free trade). However, the years after 1672 were marked by protectionisme (protectionism), which made international trading more difficult.

The Dutch were still one of the leading trading powers until about 1720, but after 1672, the tipping point was reached. It also remained one of the richest countries in the world, and a lot of Dutch money was invested in the Industrial Revolution in England, for example.

Another reason why the Dutch were doing so well in the 17th century is that the other large nations in Europe were fighting among each other, whereas the Dutch thrived in relative peace. The Dertigjarige Oorlog was expensive and devastating for the Prussians (now Germany), the French and the English. The focus was on war, not on development. So the Dutch could get an edge out of this.

Furthermore, due to the Dutch welvaart (prosperity), the regenten (regents) rested on their laurels, and did not push for further development. They were rich, things were going alright, why would they risk that for change? So they pushed back changes, and this lack of innovation allowed other countries to catch up as well.

Also, the Dutch pluralistic society had its downside. Negotiations for making decisions took a lot longer than when a small group had all the power to decide the course of a nation. This inhibited further change as well.

So this was the most prosperous age for the Dutch in a very short summary. Of course this was not all great – the Golden Age also had its victims. The Dutch were callous slave traders and colonists. To this day, there are Caribbean Islands that are part of the Dutch Kingdom.

My question to you: Did your country have a very prosperous time like this, and if so, when was that? How do you see the Gouden Eeuw? Personally, I have a rather positive image of it. After all, I was taught about this age at Dutch schools!